Official: MoMo Sanogo to have surgery on broken ankle, out 10 weeks 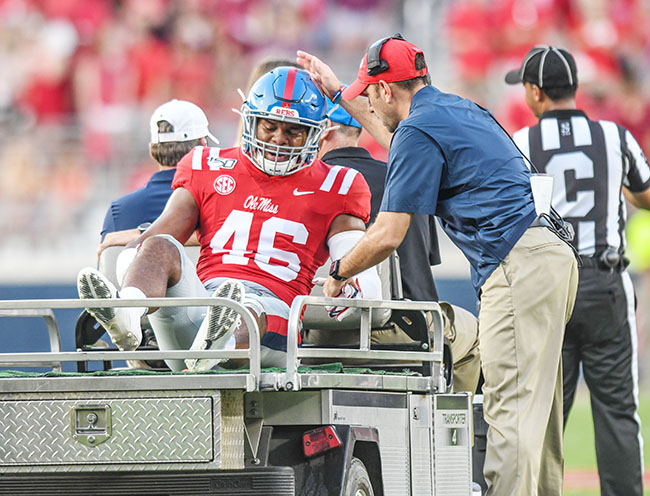 Mississippi Rebels linebacker MoMo Sanogo (46) is carted off the field after being injured against Arkansas at Vaught-Hemingway Stadium in Oxford, Miss. on Saturday, September 7, 2019. Ole Miss won 31-17 and is now 1-1 on the season. (Bruce Newman, Oxford Eagle via AP)

He’s going to be out for quite some time, the team estimates about 10 weeks. He’ll have surgery on the ankle Tuesday.

The injury happened before Sanogo ever saw a defensive snap against Arkansas. The Ole Miss junior got rolled up on in punt coverage early in the first quarter, immediately going down in what appeared to be a lot of pain, grabbing at his right leg. Sanogo needed to be carted off the field.

The good news is that inside linebacker is one of the deepest positions on the Rebel defense. The bad news is that Sanogo is simply just the best of that deep unit. Later in the week, we’ll take a closer look at the impact of the Rebels missing their most experienced linebacker for a good portion, if not all of the season. For now, it’s just a dark spot looming over the team’s big, home-opening win.