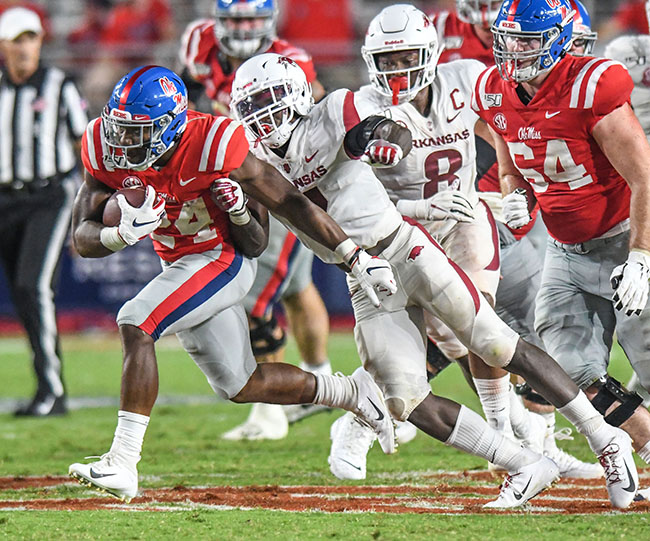 Week one for Ole Miss was simply an offensive albatross, and week two leaves a lot of room for offensive improvement, but it also showed enough of a glimpse of what could be to inspire confidence.

“There was a little bit of doubt,” offensive coordinator Rich Rodriguez said. “I didn’t have it and I don’t think the coaches had it, but some of the players did. They didn’t play like they had doubts and they didn’t practice like it. But it’s good to get it on film. We know we can run it, but when we can run it when everyone in the stadium knows you can run it, that’s pretty good.”

The yardage numbers and final score look good. But there’s still a lot to clean up.

Ole Miss turned the ball over twice against Arkansas. There were mental breakdowns and straight-up dropped balls. But as a whole, the offense ran much more smoothly against Arkansas, from the play calling all the way down to the execution.

“We have a lot of things to do, lot of things to fix,” wide receiver Elijah Moore said. “But as weeks go on, we’re going to keep clicking. I just feel like we had a chip on our shoulder. We don’t want to feel the way we felt (after Memphis) ever again.”

After failing to get other running backs involved against Memphis, Jerrion Ealy and Snoop Connor also had a bigger role against Arkansas, both seeing the field for double digit snaps.

The offense has one more tune-up week this weekend facing Southeastern Louisiana. But then, they get their toughest test to date. The California team coming here in two weeks may struggle to move the ball at times, but they have one of the nation’s 25 best defenses. After a week where there was “doubt,” the Rebel offense is excited to be back rolling.