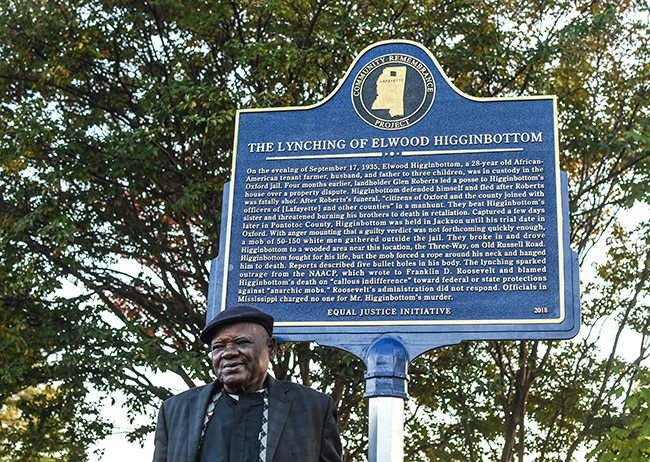 The request was made to the Lafayette County Board of Supervisors during their regular meeting on Monday.

The purpose of the plaque is “two-fold,” according to the letter sent to the Board by the committee. The first is to “remedy the wrongs committed against seven citizens of our community who were victims of racially motivated murders in Lafayette County between 1877 and 1950,” and the second purpose is to “publicly remember the victims of these extra-judicial killings, to recognize the circumstances of their untimely murders, and to acknowledge the longstanding trauma and terror these lynchings caused to their families and the wider community.”

The request comes 11 months after a plaque was installed at the four-way intersection of North Lamar Boulevard and Molly Barr Road. Elwood Higginbottom was the victim of the last lynching in Lafayette County, which took place at that location in 1935.

Along with Higginbottom, six other men will be honored by the plaque. Harris Tunstal, Will McGregory, Will Jackson, Will Steen, William Chandler and Lawson Patton are all mentioned in the proposed language for one of the two paragraphs being requested for the plaque. The first paragraph mentions the men with the heading “Lynching in Lafayette County,”; the second paragraph is titled “Lynching in America,” and discusses Higginbottom. Each paragraph ends with “The Equal Justice Initiative 2019,” which is the partner organization working with the Lynching Memorialization committee.

During the 68-minute discussion regarding the request for a plaque, four members of the committee gave testimonials with reasons why a plaque is needed. One of those who spoke was Effie Burt, a member of the steering committee for the project.

“I am here today to talk about an issue that is very important to me and is not very pretty,” Burt said. “It’s not something to be proud of, but it is an important part of this community’s history. My goal is to make sure we never forget it happened and we memorialize the lives lost as a reminder to never let it happen again.”

Board president Jeff Busby asked if family members had been contacted by the committee to see if they were okay with their loved ones’ names being put on the plaque. It is not a requirement for the project to move forward, but the committee stated they had contacted a family member of one of the victims who gave their blessing. They also stated with some of the lynchings taking place over 140 years ago, that it would be difficult to contact some of the families.

District 4 supervisor Chad McLarty, who stated he was in favor of the project, had an issue with the language regarding the reasoning for Steen’s hanging near Paris, Miss. in 1893. The plaque reads, “A mob lynched Will Steen near Paris for reportedly talking about an alleged affair with a white woman.” McLarty said he was not in support of what he categorized as “hearsay” on a historical memorial. A compromise was made to see if they can add a citation of the Oxford EAGLE article from 1893 to the plague’s language, if the committee could not prove its accuracy as fact.

A motion was made by District 1 supervisor Kevin Frye to approve the request motion subject to approval by the Mississippi Department of Archives and History. That motion died, and District 3 supervisor David Rikard made a new motion to submit the request and the plaque’s language to the Department of History and Archives for their approval. Rikard said he did not agree with approving the plaque as is until getting official approval of it by the State.

“Personally, I think, it would be beneficial to the committee, to the Board, to the entire community to hear what history and archives has to say,” Rikard said. “They may change the wording that (the committee does) not approve of. For us to vote today and say subject to their approval, that may be something that the committee may not be okay with.”

Rikard’s motion, which also includes appointing him as the Board’s liaison to the committee, was seconded by Frye and passed with a 4-1 vote. McLarty was the lone no vote. The request will now be sent to the Mississippi Department of Archives and History for their approval.

The committee is requesting the plaque be installed on the east side of the Courthouse lawn on the site of Patton’s lynching. A new location could be recommended, pending the infrastructure of the requested site.