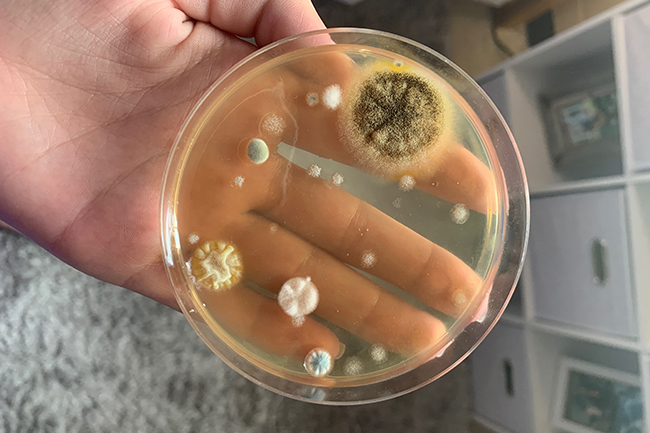 This at-home mold testing kit shows Aspergillus Niger, a form of black mold, which grew after one hour of air exposure in Brittany Musser's daughter's dorm room in Crosby Hall. Musser's daughter and her roommate had been experiencing nose bleeds and upper respiratory infections before finally demanding they be moved to another residence hall. (Brittany Musser)

Crosby Hall is the largest residence hall on the University of Mississippi campus, and according to one mother, it’s also been the source of her daughter’s continuous health problems.

Brittany Musser, whose daughter is a student at Ole Miss, said her daughter called her recently, complaining that she and her roommate were having nosebleeds. She had also been diagnosed with an upper respiratory infection that required a steroid shot. After seeing pictures of a black, yellow and green substance spreading across the ceiling in one corner of her daughter’s room, Musser said she knew the culprit: mold.

“I’m an interior designer who deals with mold issues all the time,” Musser said. “It’s been brought to my attention that Crosby had mold problems around this time last year. I know what goes into solving mold issues, and I am fully aware that the walls and insulation were not completely ripped out.”

After instructing her daughter to stick a pin into the area with the suspected mold to check for moisture, Musser said she immediately sent her daughter to the store to buy an at-home mold testing kit. After one hour of exposure to the air in the dorm room, and a 48 hour wait time, Musser’s daughter sent her another photo of what had grown in the kit. It was at that point, she said, she felt the need to alert other parents to the dangers of mold exposure in Crosby.

Musser took to the “Ole Miss Parents” Facebook group Monday to share her findings. The post got more than 140 comments, from parents who also had daughters living in Crosby and those who experienced the same troubles the year before. The University acknowledged the mold problems in 2018, as evidenced by the following excerpt from the Ole Miss Student Housing website:

“In 2018, there was a dramatic increase in the number of U.S. colleges and universities impacted by excessive moisture and humidity issues associated with warmer than average temperatures and increased rainfall. This has sometimes resulted in indoor mold growth in residential buildings. As such, we are placing even greater emphasis on reducing excessive moisture and indoor humidity as part of our efforts to prevent the growth of mold in our residential building.”

The website goes on to detail the various tests conducted by the University to monitor mold growth, tips for residents to prevent the spread of mold and language from the Environmental Protection Agency that explains that “there is no practical way to eliminate all mold and mold spores in the indoor environment; the way to control indoor mold growth is to control moisture.”

“Since the University has had prior knowledge and are still allowing kids to reside in this dorm… the University is liable,” Musser said. “It’s disgusting. It’s horrible. This is what these kids are inhaling.”

In a letter sent to Crosby residents on Thursday, Student Housing director John Yaun denied the presence of mold in any residence hall.

“We take very seriously the concerns expressed by residents of Crosby Hall over the past few days and want to address the important items we heard from our students,” Yaun said in the letter. “The Department of Student Housing has seen no evidence of active mold growth in any residential environment within Crosby Hall or other residential buildings across the campus. Please be assured that we are committed to providing and maintaining safe, healthy facilities for all of our students.

“We monitor air quality ranges and observe safety guidelines set by the U.S. Environmental Protection Agency and utilized by the Centers for Disease Control and Prevention. We also work with external vendors to conduct indoor air quality sampling of each residential area.”

The rest of the letter included the same tips from the UM Student Housing website for maintaining a clean environment and preventing the spread of mold.

Musser said that ultimately, she was able to get her daughter and her roommate moved out of Crosby and into a newer residence hall, where their symptoms have almost completely subsided. Many other parents she’d contacted have reported the same thing, but unfortunately, she said, some girls are still living in these conditions.

“Even though I got my daughter out, I feel the need to help the girls in this dorm, and help those parents whose children are still there,” she said. “I feel horrible for the girls who are being forced to live there knowing this mold is there. It’s unbelievable that they’re putting these kids at risk the way they are.”