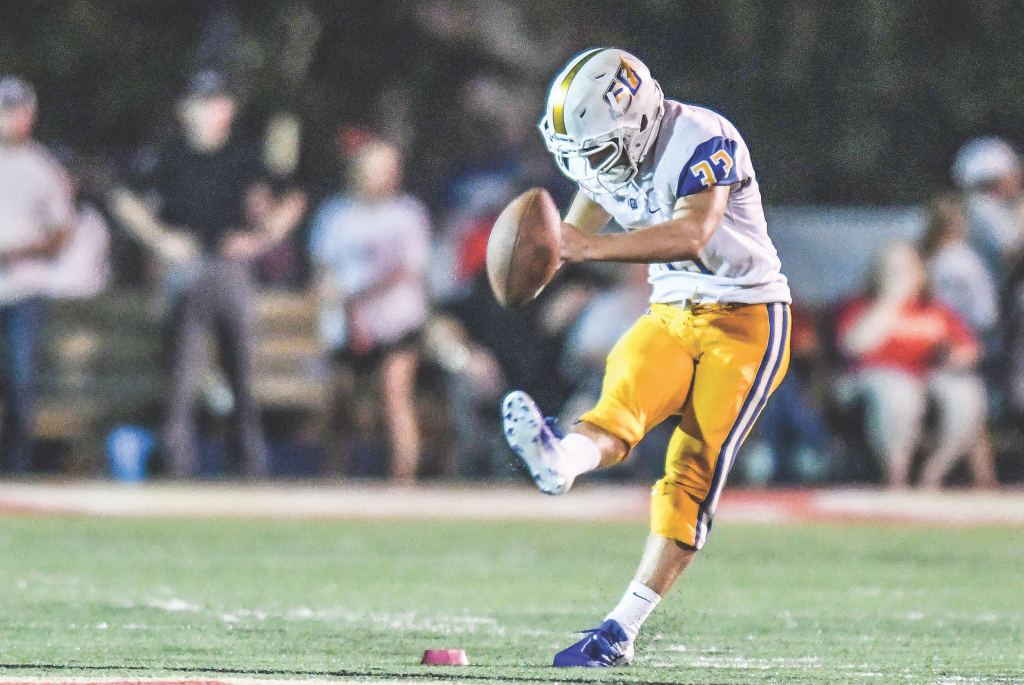 Unlike covering Ole Miss or other college football games, I usually cover high school games from the sideline. There’s not a ton of rules, with the exception that you’re not really supposed to be inside the team’s box, but you can stand pretty much right next to the coaches for much of the game and overhear almost everything that’s said.

What this also means is you get to see, close up, all of the violent hits. The most notable? Kickoffs.

I sent this exact text to a group of friends on Friday night from the sidelines of the Lafayette-West Point game: “Kickoffs are so violent. It makes no sense that this is something 15 (year olds) are doing on a regular basis.”

A friend responded, “It’s like a high-speed car wreck. There’s just no way this should be part of high school football in 2019.”

It’s worth noting that this message was sent to a group where we almost exclusively talk about football. This friend of mine played college football at NC State. We all love the game. It’s my favorite sport and it’s been that way for as long as I can remember. But that final sentence is real. It’s not 1997; we know the dangers of football in 2019.

According to a 2018 study published in the Journal of the American Medial Association by researchers at the University of Pennsylvania, kickoffs in Ivy League football accounted for just 6 percent of all plays. Yet those 6 percent of plays resulted in 21 percent of the concussions.

Published in the Journal of Neurotrauma in 2014, a group of researchers at Purdue University found about 67,000 high school football players every year are ‘clinically diagnosed’ with a concussion. It’s estimated that tens of thousands more go undiagnosed. Yet, if the 21 percent quotient is correct, that 67,000 number could be cut down annually to around 53,000 – just by not going through kickoffs. That’s 15,000 less kids getting concussed ever year.

A big part of the pushback against eliminating kickoffs is simple – they’ve always been part of the game. And that’s well and good. Football would look strange without kickoffs, at least for the start. But just doing something because that’s how it’s always been done is a silly way to approach life. We used to not let women or African Americans vote in this country. We used to study concussions by literally dropping pregnant chimpanzees down elevator shafts (that’s not a joke – Google it).

Change is good. And I’m not even advocating for change throughout the entire game, just among high schoolers. Brains are ever-changing and maturing, but they’re not fully developed until around 25 years old for most people. The teenage years are when much of the maturation of the prefrontal cortex occurs, what neuroscientists call the development of “executive functions.”

These executive functions are the development of how we regulate emotions, assess risk and set goals, among a myriad of other things. Want to know why teens don’t exactly act with great judgement a lot of the time? It’s because their brains are still figuring that part out. So maybe, just maybe, let’s not interfere with that development by unnecessarily putting them through these “high-speed car wrecks” week-to-week.

Rule changes help, certainly. But it’s impossible to have them do enough. In high school football, balls are kicked off from the 40 yard line. For college and professional football, it’s kicked from the 35. Recently, in 2016, the Ivy League moved their kickoffs up to the 40 yard line. This small change reduced concussion rate on kickoffs by 68 percent.

So could high schools reduct concussion rates by similar to that 68-percent change by simply moving kickoffs from the 40 to 45 yard line? Yes, that would likely be a big help. But if you’re going to go that far, why not just 100-percent eliminate kickoff concussions altogether? There’s really no logical reason to not simply start every drive on the 25 yard line and not kickoff at all.

It’s not like we’re not already making changes to lessen the impact of these plays. In the NFL, touchbacks now results in the ball on the 25 yard line instead of the 20. In college football, any fair catch sign inside the 25 results in a touchback; that’s essentially just not having a kickoff.

In 2017, the MHSAA defined the banning of a pop-up kick, a kickoff in which the kicker drives the ball immediately into the ground, popping it straight into the air. Clearly, just as this sounds, it would create bigger collisions, hence the banning. In 2018, the MHSAA allowed penalty yards on kicks to be enforced on the ensuing possession, an effort to reduce the risk of re-kicking when there’s a penalty.

And these changes are all well and good… but really why not just punt on the kickoff altogether?

Sure, kickoffs can be exciting. Maybe twice a season, you’ll see one returned for a touchdown. But are those two touchdowns over the course of the season really worth the tens or hundreds of plays a season where 17-year-olds are colliding full-speed with each other just for a kickoff to be returned to the 19 yard line? Simply put, the answer is no.

Football may have a hazy future, but we should at least be doing anything in our power to keep the game in tact while still making it safer. For kickoffs, it seems simple: let’s at least wait until these brains are more fully developed.