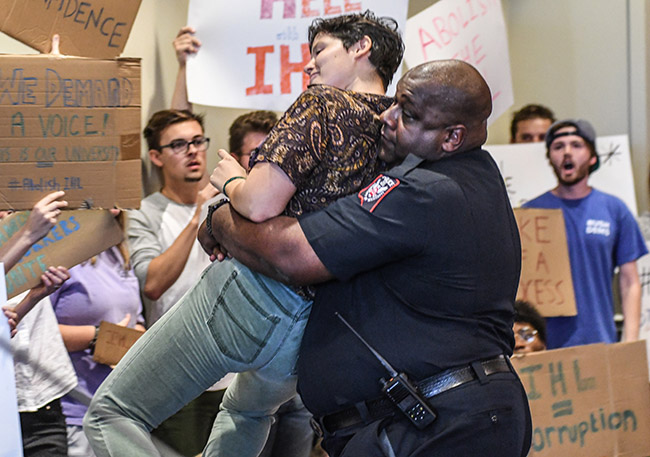 University of Mississippi police chief Ray Hawkins carries protestor Cam Calisch out of the room where the planned announcement of Glenn Boyce as the new chancellor of the University of Mississippi was scheduled to occur, in Oxford, Miss. on Friday, October 4, 2019. The announcement was postponed due to protests. (Bruce Newman, Oxford Eagle via AP)

There was supposed to be a press conference by the Institutions of Higher Learning to announce the hiring of the University of Mississippi’s next chancellor on Friday.

Student protesters and others who were upset with how the process occurred made sure that never happened. With a ballroom full of Ole Miss alumni, faculty, staff and students awaiting to see Dr. Glenn Boyce be introduced as Jeffrey Vitter’s successor, Boyce never made an appearance.

After a near 22-minute delay, University Police chief Ray Hawkins took to the podium to tell everyone in attendance the scheduled press conference would not be taking place.

“We were trying to have a peaceful and civil meeting so the IHL could share their decision on announcing (Ole Miss’s) next chancellor,” Hawkins said. “We can no longer do that because there are those in attendance who are choosing not to be civil. …This meeting will not take place today.”

The protesters, many of whom were members of the UM Solidarity group and Students Against Social Injustice (SASI) began assembling at The Grove’s amphitheater stage around 11 a.m., an hour before the press conference at The Inn at Ole Miss was scheduled to begin. Members began making signs on cardboard and other materials that read “Stop the Process” and “IHL… What the Hell?”

Friday’s protest came together within hours after reports of Boyce’s hiring hit social media on Thursday evening. The idea of a protest had been formed months earlier.

“For the most part as a student activist group we try to stick to local things, small things we can tackle in a short amount of time,” Stephen Steenwyck of UM Solidarity said. “Challenging something like a large state-appointed board is a large task. At this point, right now in this moment is a very local issue. …We’d like more transparency as students to be able to take these things seriously and hold those groups accountable.”

As the press conference drew nearer, protesters were allowed in to the ballroom and stood to the podium’s left along the wall. As their numbers grew, so did the volume of the chants. “IHL, What the Hell?” rang throughout the ballroom before noon, which was in response to a “Hotty Toddy” chant that was started by others in attendance.

Once IHL Board member Ford Dye came out from the hallway behind the ballroom and took to the podium, the atmosphere grew more tense. Dye asked those in attendance to abide by the University’s creed, which was welcomed by boos from the protesters. One protester requested that Dye recite the creed himself.

The protesters, led by SASI member Cam Calish, grew louder and drowned out Dye, who then went back to the room he entered from, but not before Hawkins and another UPD officer removed Calish and another protester from the room.

“We’re framing this in an abolish-IHL narrative,” Calisch said in The Grove prior to their protest. “There’s no, kind of, democratic autonomy in the University of Mississippi. Every decision goes through (the IHL). …For them to totally, and publicly, expose how corrupt they are really added a lot of fuel to the idea (of a protest).”

With the cancellation of the press conference, the IHL sent out a press release announcing the unanimous hiring of Boyce as Ole Miss next chancellor.