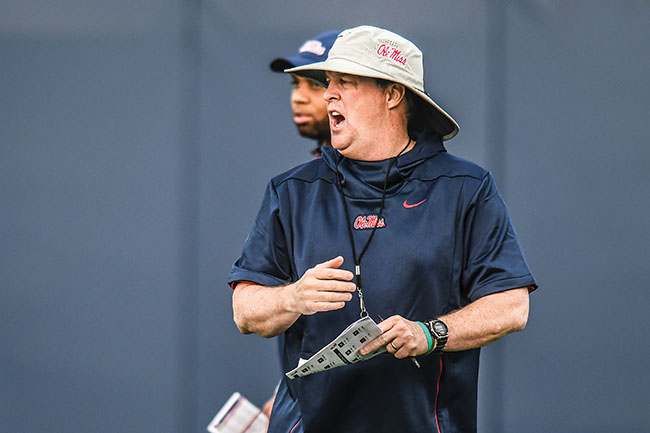 Ole Miss has five players on roster from the greater Nashville area, but none have as many ties with the city, and the Rebels’ Saturday night opponent, as Mike MacIntyre.

The Rebels’ first-year defensive coordinator literally grew up on Vanderbilt’s campus and around the Commodore program. MacIntyre’s father, George MacIntyre, coached Vanderbilt from 1979 to 1985. He resigned from Vanderbilt after a 3-7-1 season in 1985, interestingly citing “the continuing rise in academic standards, both in admissions and in the retaining of student athletes,” among his reasons for the lack of success.

The family would stay in the area, with George later coaching at Donelson Christian Academy in the city. Mike MacIntyre himself attended high school at Brentwood Academy, the same school as current outside linebacker Luke Know, offensive lineman Bryce Matthews and long snapper Jack Propst. He went to Vanderbilt for two years, playing defensive back under his dad from 1984-1985, before transferring to Georgia Tech following his father’s resignation.

“I went to school there for two years, but it felt like I was in school all seven years my dad was the coach there, just from being around all the time,” Macintyre said. “It’s a lot of great friends and a lot of great memories. Playing Vanderbilt, there will be a lot of family there.”

MacIntyre said most of his immediate family still lives in the Nashville area, and a ton of them will be in the stands of Vaught-Hemingway Stadium on Saturday evening. And it’s not just his blood family, MacIntyre’s wife is Vanderbilt graduate and his father-in-law was an All-SEC basketball player for the Commodores.

From a football perspective, defensively MacIntyre said he knows exactly where this team needs to get better against Vandy. When talking about the Commodore offense and what to expect from the game, he sort of chuckled: “They’re going to throw on us. Wouldn’t you?”

Ole Miss gave up over 400 passing yards to Alabama last week, including 274 yards and five touchdowns to junior receiver DeVonta Smith. Now in fairness, Alabama may have the best collection of quarterback and receivers in the nation. That said, Vanderbilt strangely has about as good of a receiver, running back and tight end trio as anyone in the nation.

Running back Ke’Shawn Vaughn, despite already playing Georgia and LSU, is fourth in the conference in rushing and averaging 5.8 yards per carry. Receiver Kalija Lipscomb is seventh in the conference in receptions and tight end Jared Pinkney is fourth in receptions among tight ends. All three are seniors and will likely be on NFL rosters a year from now.

“Lipscomb and Pinkney, they’re great football players. I think they’ll both have chances of being on NFL rosters. They’re going to be guys people look at, guys scouts look at. They’re that good,” MacIntyre said. “Going against those (receivers) we went against in Alabama should hopefully help. But we just have to get our confidence back, because your confidence gets rocked a little bit when that happens.”

The Ole Miss defense still ranks No. 45 nationally in efficiency, but that’s a far drop from when they had the nation’s No. 8 defense after two weeks of play. That above mentioned pass defense is the reason for the drop. Ole Miss is still allowing just 106.8 rushing yards per game, good for fifth in the SEC and 31st nationally. But the problem is they’re giving up over 314.4 yards per game in the air, No. 123 in the nation out of 130.

MacIntyre needs to get this secondary figured out if Ole Miss is going to have any chance to turn things around and get to six wins. This weekend, he’ll be looking across the sidelines at a team he knows better than anyone in Oxford to try and do just that.