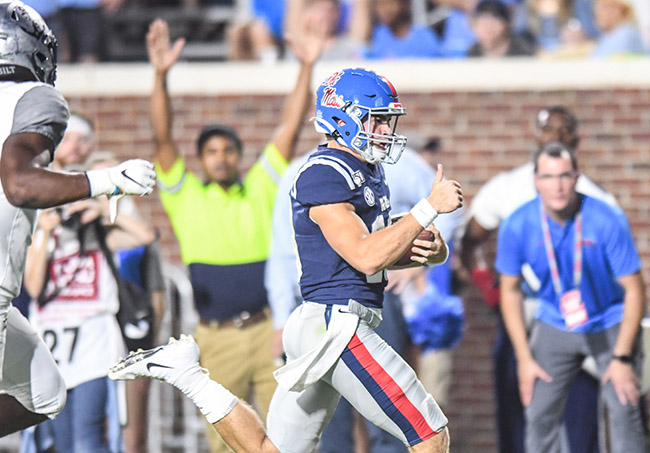 The kids are alright.

What started as a youth movement for Ole Miss this season has simply turned into a productive offense. Heading into Saturday’s Vanderbilt game, freshmen accounted for 1,737 of 2,116 total yards for Ole Miss. It’s an 82-percent clip that leads the nation. Against Vanderbilt, the trend just continued.

During the Rebels’ 31-6 victory over Vanderbilt, the freshman triplet of quarterback John Rhys Plumlee and running backs Jerrion Ealy and Snoop Conner helped Ole Miss amass more than 4oo rushing yards, something they hadn’t done since Nov. 8, 2014 against Presbyterian.

The trio was responsible for 88.2 percent of the Rebels’ 512 total yards of offense against the Commodores.

The quarterback question seemed to have been answered after Saturday, with Plumlee getting the start and Matt Corral not taking the field all game, despite dressing out and throwing on the sideline throughout the night.

“Signing, you know you really want to go somewhere and help the team,” Plumlee said. “To have success this early with a lot of young guys is really special. I think we’re really blessed with the abilities that we have and the opportunities that we were given and I think we just made the most of them when we had them.”

The duo of Ealy and Conner combined for 262 rushing yards and two touchdowns. The Jackson Prep star jump started the second half for the Rebels with a 78-yard scamper early in the third quarter. Ealy finished with a score and 97 yards on four carries.

Not to be outdone by his teammate, on the Rebels’ next possession Connor scored on an 84-yard rush. Connor finished with 91 yards and a touchdown on five carries.

Both runs were career-longs for the pair. Plumlee’s run of 54 yards was also a new career-best for the quarterback.

“If you would have asked me I would have never guessed it. Not in a million years, probably,” Ealy said about a freshman trio now carrying the load for the offense. “It’s great to have three, big freshman producing well.”

With half of the season remaining, it has become apparent the offense will be led by Ole Miss’s underclassmen. Needing only three more wins to clinch their first bowl berth since 2015, they will have to be won with players who only have six games of experience at the collegiate level. That quest continues next week at Missouri.