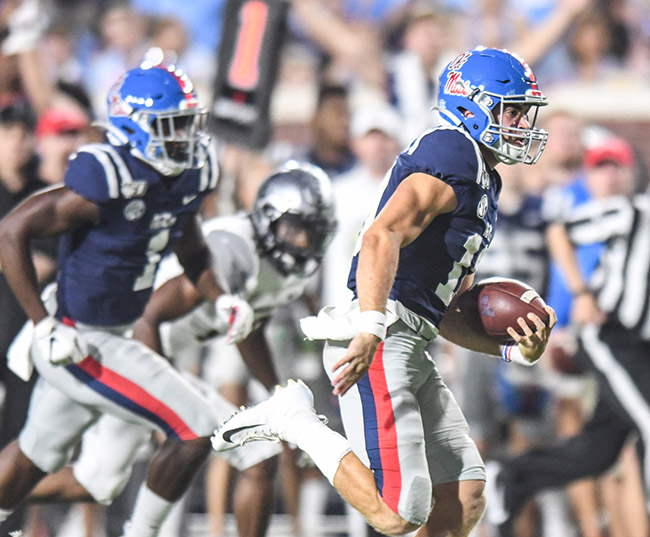 The offense was one-dimensional, and the football was one-sided, but on Saturday night in Vaught-Hemingway Stadium, that rushing attack was all Ole Miss needed to blow out Vanderbilt 31-6 for their second win in conference play.

With true freshman John Rhys Plumlee under center for the second straight week, Ole Miss ran all over Vanderbilt to the tune of 415 rushing yards. This Vanderbilt team has already played both Georgia and LSU to this point on the year. By midway through the third quarter, Ole Miss had already topped both of their rush totals.

“It was exciting. The first start was in a hostile environment, but to come and play at the Vaught with however many strong behind you was really neat. It was a lot of fun.” Plumlee said. “I think I got better, but I think I can be a whole lot better.”

Ole Miss got off to a hot start, scoring on their first two drives of the game. Plumlee’s first career touchdown in Vaught-Hemingway Stadium capped the hot Ole Miss start, a 33-yard rush to the north endzone putting the Rebels up 10-0 early. They didn’t score again in the first half, but Jerrion Ealy got the team going again in the second half.

Lined up to Plumlee’s left on the opening Rebel drive of the second half, Ealy took the handoff in a counter look to the right. Breaking two tackles early and scampering 78 yards for the second Ole Miss touchdown, Ealy broke the game open for Ole Miss.

The next drive, it was the other true freshman running back Snoop Connor carrying 84 yards for the second straight long touchdown run. With Ole Miss up 24-6 at that point early in the third quarter, the game was essentially out of hand. Not to be outdone, Scottie Phillips got his own touchdown late to put the Rebels up 31-6.

Plumlee finished the day running for 165 yards and one score and throwing for 99 yards on 10 of 18 passing.

“When you’re playing with 11, and your quarterback is a factor in the run game, that gives you an edge,” said offensive coordinator Rich Rodriguez. “We did a pretty good job up front getting a hat on a hat and our tight ends do a solid job blocking.”

Defensively, it was a big night for the Ole Miss inside linebacking group. Jacquez Jones and Lakia Henry were everywhere on the field on Saturday night. The Ole Miss defense held a very good player in Vandy running back Ke’Shawn Vaughn to just 69 rushing yards. Lakia Henry totaled 15 tackles and a sack, while Jacquez Jones had nine more of his own, sequestering the Vandy rushing attack.

After struggling to get off the field on third downs all afternoon in Tuscaloosa, Ole Miss held Vandy to just 2 of 17 on third down conversions.

“That was the number one point of emphasis on defense,” Luke said. “A number of big plays against Alabama, especially in the third quarter, happened on third down. We spent a lot of time on that. Credit coach MacIntyre and his staff. They were well prepared and the players executed the scheme. They did an outstanding job getting off the field.”

Now at 3-3, Ole Miss is above .500 in SEC play. Next week, they go on the road to Missouri to play a Tiger team that may be without starting quarterback Kelly Bryant.

Lafayette gets late fireworks to come from behind to…