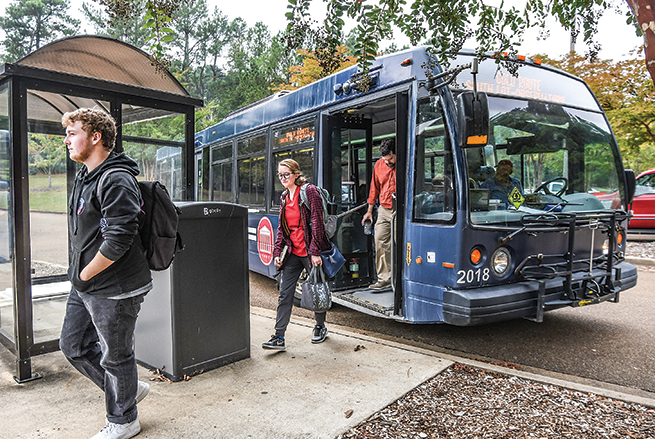 Oxford’s public transit system is growing, but with that growth comes challenges.

Between the months of June and August, the Oxford University Transit system had over 4,600 more riders than they did in the same period in 2018. A lot of that is due to OUT offering free rides during June and July, in hopes to get Oxford residents back on the buses.

With that growth, OUT has experienced some growing pains due to mechanical issues and a lack of buses to serve the demand of riders. In her report to Oxford’s Board of Aldermen during their Oct. 1 meeting, OUT general manager Donna Zampella outlined those issues.

“I feel that we’re growing,” Zampella said. “We do know that Oxford transit is a work in progress as well. We do know that there are problems we are trying to solve. One is the quality of our buses. A lot of them are old and way past their useful life.”

In the past month there have been seven OUT buses out of service due to mechanical failure. For example, one bus caught fire, but no injuries were reported. Due to these issues, routes have begun to run behind schedule and causing citizens and Ole Miss students to be late, Zampella said.

Five new buses are scheduled to arrive early next year, but those are only replacing the five buses that Zampella leased for the fall until the purchased buses arrive. By fall 2020, Zampella said she hopes to have a few more buses added to the fleet.

“In the past, they kind of did a little band-aid approach and we’d acquire buses from other organizations that were already past their useful life. So, we just took on their problems,” Zampella said. “This has just caused us to continue down the same path. …(The new buses are) just going to help make us a more reliable company, because right now I can’t say that we are reliable.”

Another issue Zampella said the transit department faces is communicating with Oxford residents about OUT and relaying route information to them in a timely and efficient manner.

To fix that, she has partnered with a group called Triangle Consulting, which has helped revamp OUT’s website. On the site is the Nextbus application, which tracks each bus and gives real-time updates on how far the bus is from its next stop. The website also features schedules and a virtual tour of Oxford called “Around Oxford.”

Zampella noted that their GPS system, Nextbus, will see changes soonto help provide more accurate tracking data for each bus. The system could possibly be replaced by a new GPS program that Triangle Consulting is currently testing, she said.

“It’s going to be a pretty fun site,” Zampella said. “I think in the future, hopefully by this time next year, we’ll be able to fill a lot of the complaints we’ve had the past few months. They’ve been legitimate complaints. We’re not putting our head in the sand. We were facing them headstrong and trying to give to help and get through it.”