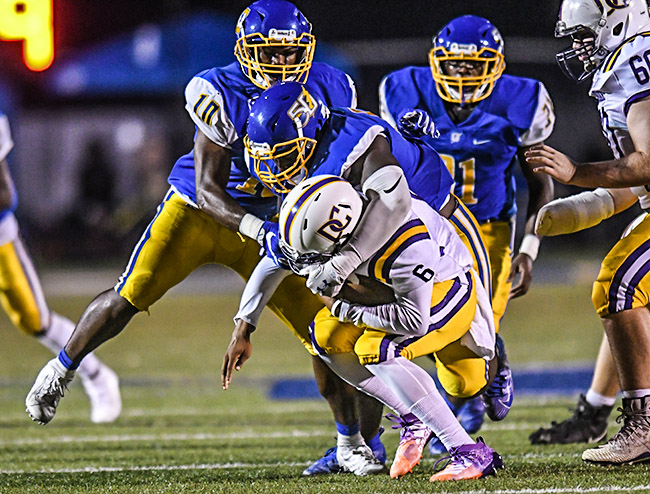 Homecoming night was never really in question for the Chargers.

From the opening drive, Oxford made DeSoto Central seem like a team hardly playing 6A football. By final whistle, the outcome represented that reality, with the Chargers running away with their homecoming game by a score of 51-6.

It was Oxford quarterback John Meagher setting the pace for the game not with his passing, but with his legs. Meagher’s first carry of the night went for 23 yards, part of an opening half of play that saw him score three times and post over 100 yards of rushing.

“We just came out strong,” Meagher said. “The offensive line was blocking great up front, and outside were able to take on two or three guys. We just kept them on their toes and were able to run the ball really well.”

A dominant opening half of play for the Chargers was marred late. A DeSoto Central kickoff return for a touchdown represented the only Jaguar points of the opening half, and the only time they advanced to the Oxford side of the field.

Meagher and many of the Oxford starters exited the field late in the third quarter, Oxford up 37-6 when they took off their helmets. Meagher didn’t carry the ball again after a fantastic first half. Instead, he threw a 26-yard touchdown to Trynton Brannon in the third quarter, this coming one drive after Byron Pearson took a jet sweep handoff 36 yards for a Charger touchdown.

The thing is, when the Oxford backups hit the field, the scoring didn’t really let up. Backup quarterback Michael Harvey converted on his first two pass attempts of the game, hitting Jalen Egerson for a 39-yard touchdown in the process to go up 44-6.

“I was really proud of Michael. That was his first touchdown pass,” head coach Chris Cutcliffe said. “He did a nice job recognizing the coverage and went to the right place with the ball. Then he made a great throw. It was great to get him some good time with much of the starting offense.”

Lucas McKeown would cap the night for Oxford late in the fourth quarter. His final touchdown put Oxford above the 50-point mark in the big blowout. In the end, three different seniors scored for the Chargers on senior night. Another senior who is often one of the biggest threats, JJ Pegues, didn’t play due to an ankle sprain.

A scary scene late in the second quarter was when Oxford sophomore Cade Gray had to be escorted off the field in an ambulance. Gray, making his first start along the offensive line, had his facemask yanked backwards as he was falling to the ground on the play. After rolling over, Gray was face down for over 15 minutes before being lifted in a stretcher to an ambulance. He had a limited, numb feeling in his legs and was taken to Baptist Memorial Hospital-North Mississippi, according to reports. The EAGLE has no further updates on Grey’s condition at this time.

“It wasn’t in any way a dirty play. Unfortunately, things like that happen sometimes in football,” Cutcliffe said. “Cade was in good spirits leaving and his family was down there making sure everything was good with him. He gave a big thumbs up as he was leaving, and that made everyone feel a lot better.”

Up next for Oxford is a road trip to the defending 6A champs. Now 6-1 and undefeated in the district, they’ll travel to 3-3 Horn Lake next Friday night.