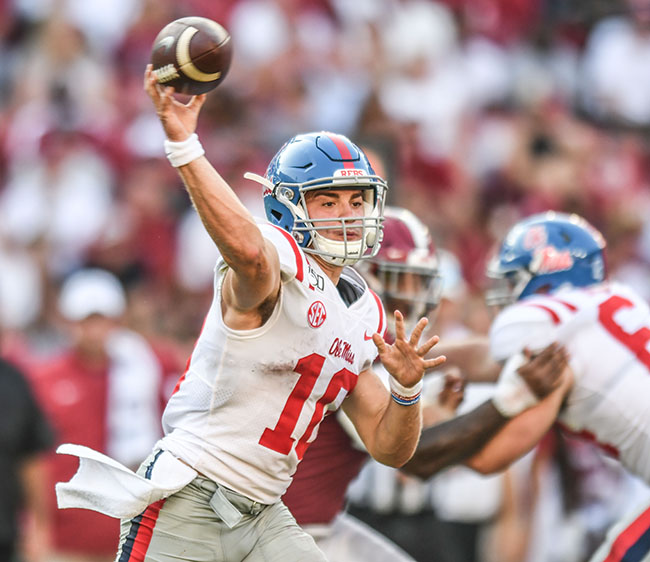 Yes, Ole Miss has already gone into Tuscaloosa to play the Tide, but one of the weird things about football in 2019 is that it’s not Alabama or LSU with the SEC’s best defense – it’s the Missouri Tigers.

Coming into week seven, Mizzou touts the nation’s No. 3 total defense, trailing only behind Wisconsin and Navy. Through five games, they’ve given up just 1,136 total yards (227.2 per game). Teams are scoring 13.6 points against the Tigers, and just 7.75 points in games played in Columbia. Even the advanced metrics love the Missouri defense: they’re ranked No. 9 in SP+ and No. 14 in FEI, and each metric has just one SEC team ranked ahead of the Tigers.

None of this is meant to frighten an Ole Miss fan, just for perspective. Here’s the good news: Missouri will be playing Saturday without their best defensive player, and their best player on the offensive side of the ball won’t be 100 percent.

Cale Garrett, Missouri’s star middle linebacker who has been playing at All-American pace, tore a pectoral tendon last week against Troy. Garrett had surgery on that pectoral and is out for the Tigers indefinitely. In five games, Garrett lead the team with 39 tackles, including three for a loss. But where he really excels – especially for a linebacker – is in coverage. Garrett has intercepted three passes this season, and two of them he returned for a touchdown. He’s also returned a fumble for a touchdown. Before getting hurt, he was the favorite to win the Butkus Award.

A four-year starter at Missouri, it’s impossible to know just how much the Missouri defense will take a step back with him out. Yet, it takes a whole team of 11 players to produce the numbers Mizzou has put up defensively.

Without Garrett, the focus for Ole Miss lands on the Missouri defensive front. The Tigers are allowing just 88.8 rushing yards per game (12th nationally), and as good as Garrett is, a lot of that falls on the shoulders of the four guys on the defensive line. Matt Luke compared the defensive front to Auburn – they’re fast and they can move. Rarely are they stationary in the same location.

Ole Miss will travel to Columbia as 12.5-point underdogs. The matchup that will determine if they can pull off the double-digit upset relies on their ability to run the ball against that defensive front. In the two games started by John Rhys Plumlee, Ole Miss has rushed for an average of 346 yards per game. Mizzou is allowing just 88.8 yards on the ground per game. It’s a massive difference in styles, and likely the one that will be the determining factor in the outcome.

On the other side of the ball, it’s Missouri’s quarterback Kelly Bryant who may not 100 percent be himself against Ole Miss. The Clemson transfer got rolled up on toward the end of last week’s game, an ugly hit that made it look like Bryant may be out for quite some time. Thankfully, Bryant suffered just a knee sprain and is a go to play against Ole Miss this weekend. The team is saying Bryant has not been limited in practice, but it’s hard to imagine the injury won’t limit Bryant just a bit. And for a quarterback like Bryant who relies more on his legs than his arm, being limited with a knee injury could change a lot for the Missouri offense.

His top target in the passing game is a tight end, Albert Okwuegbunam. When April comes around, Okwuegbunam will likely be the first tight end taken in the NFL Draft. But a week ago, Ole Miss shut down another likely first-round tight end in Vanderbilt’s Jared Pinkney. Played mostly by Jacquez Jones defensively, Pinkney was held to just one catch for seven yards – he was a non-factor. It’ll be interesting to see if Ole Miss attacks Okwuegbunam similarly.

If Ole Miss can shut down Okwuegbunam and Bryant is limited in the running game, scoring may be difficult for the Tigers. In wake of injuries, Ole Miss seems to catch Missouri at a good time. Yet going on the road to a team the Rebels play essentially just once a decade, there’s a reason Ole Miss is a two-score underdog. The upset win could be huge for a team trying to make their first bowl since 2015.