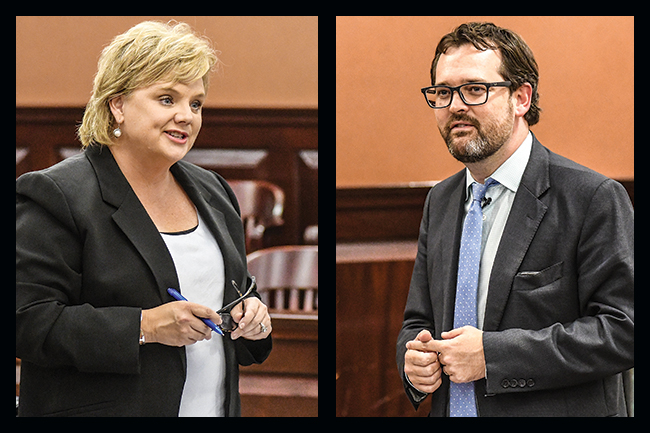 Kevin Frye and Nicole Akins Boyd took one last opportunity Monday night to convince potential voters they were the right person to send to Jackson.

The two District 9 candidates for the Mississippi Senate participated in the first of three candidate forums sponsored by the League of Women Voters Oxford-North Mississippi group this week and next. Approximately 60 people filled a courtroom in the Lafayette County Chancery Building on Monday to have their questions answered and to listen.

During the two-hour forum, which was a mesh of a town hall and debate format, 15 topics of discussion were presented. Boyd, who once worked at the state Attorney General’s office, and Frye, the current District 1 County supervisor, agreed on most of the topics, but did have differing opinions on some key subjects.

Boyd used her opening five minutes to discuss her platform of fighting for Mississippi families as well as her background, including her time spent in Jackson working at the state legislative level and the process of working with committees and lobbying. She also discussed her focus on children’s issues, especially advocating for children with special needs. Boyd’s son was diagnosed with autism at an early age, she said.

“Yes, I worked with the legislature and yes, I want to go back,” Boyd said. “But, this time I want to have the vote in that process.”

Many of the early subjects brought up from audience questions were topics in which Boyd and Frye agreed with the other’s stance, including the opioid crisis, thoughts on fully funding the Mississippi Adequate Education Program (MAEP) and the need to bring more state money in to meet the County’s need for infrastructure improvements.

Earlier on Monday, it was reported by the Associated Press that a settlement was close to being made regarding the national opioids lawsuit, just prior to a test case beginning its trial in Ohio.

Lafayette County is one of 23 Mississippi counties that are part of a lawsuit against pharmaceutical companies. Several people in the audience wanted to know what Boyd or Frye would do, if elected, with any money the City of Oxford or the Counties under their jurisdiction might receive from the opioids lawsuit.

“That’s why I was an advocate for us participating in the first place, was so Lafayette County could look at our numbers, look at our issues we’ve had and hopefully get some compensation,” Frye said. “I won’t be on the Board of Supervisors come January; I hope I’ll be in Jackson. But, if I was on the Board of Supervisors when those monies came, certainly, I think Communicare is a place that those dollars should be spent. I would also like to see our law enforcement have the opportunity to kind of expand and create a crisis intervention team that could deal with substance abuse and mental health issues.”

One subject on which the two differed in philosophy was Medicaid expansion in Mississippi. In May, state hospital officials proposed a plan called Mississippi Cares, which would expand coverage to roughly 300,000 low-income Mississippians, including those who cannot qualify for Medicaid and fall into a gap of insurance options. Boyd said she was in favor the Mississippi Care proposals by the Mississippi Hospital Association.

“I have been watching it. I’ve been talking with them extensively and, if elected, it is one of the proposals that I will greatly look at to see if we can fund it,” Boyd said. “It is supposed to be a revenue-neutral option, but it is something that I am very, very excited about, the possibility of getting better healthcare coverage.”

Frye agreed the expansion should take place, and pointed out that it would bring a $1 billion economic stimulus and around 9,000 jobs to Mississippi. He also brought up Boyd’s announcement that she had been endorsed by the National Federation of Independent Business, an organization that took a case to the Supreme Court that attempted to “gut the Affordable Care Act,” according to Fry.

“Were it not for the lead plaintiff in this case that she is announcing has endorsed her, we would’ve already had Medicaid expansion in Mississippi,” Frye said. “I’m for it. I think we need to do it yesterday and I think it’s something we disagree on, because I’m not taking endorsements from PACs that don’t agree with the policies I support.”

When asked about the Public Employee’s Retirement System and ways to better fund it, Boyd mentioned the idea of taking out “five to six agencies” in the state and cutting funds from them to provide a pay increase to state employees. She was later asked during the forum what five agencies she would cut from, but she did not provide a specific list of whom she had in mind.

Gray Tollison announced earlier this year that he would not be seeking re-election for the District 9 seat after 24 years of serving in the state legislature. Frye and Boyd spoke positively of the man whose seat one of them will fill come January.