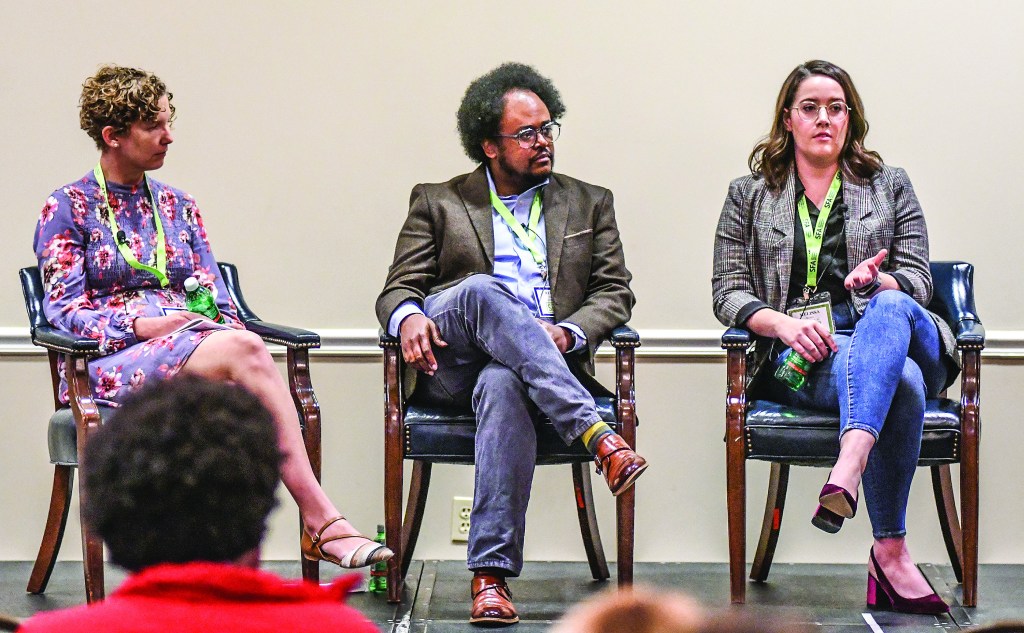 Amy Yurkanin, from left, Ryan Nave, and Melissa Brown speak on the topic of "The Price of Campus Food" at the annual Southern Foodways Alliance symposium at the Inn at Ole Miss, in Oxford, Miss. on Friday, October 25, 2019. (Bruce Newman, Oxford Eagle)

The University of Mississippi’s dining services have been under contract with Aramark since 1996, and the 2019 Southern Foodways Alliance Fall Symposium devoted part of last weekend to examining the impact of that relationship.

The “Cost of Campus Food” discussion, which featured Mississippi Today, Montgomery Advertiser and Al.com writers Ryan L. Nave, Melissa Brown and Amy Yurkanin, served as a grand finale for an investigative reporting series on the issue of campus dining at Southern universities.

“It’s one thing to call somebody else out, but it’s another to make sure your own house is clean,” said Atlanta Journal Constitution writer Rosalind Bentley, who served as moderator.

While recent conversations about campus food have revolved around the source – if the greens are organic, if chicken is free range – Bentley said it was time to focus on the people who prepare the food for students, many of whom, like at Ole Miss, are employed by Aramark.

The discussion sought to answer questions surrounding how campus food service employees are compensated, how they are treated and what benefits they receive from their employers.

For Nave, one of the biggest reasons he chose to join in on the project was personal.

“I was a campus dining worker when I was in college. … I saw and experienced all of the things we’re covering in our stories,” Nave said. “Having to pay their own parking, for example, or getting in trouble for giving free meals to kids who ran out of food swipes. … There’s a lot of work that goes into providing food, and there’s a lot of costs that go into providing food. Really, the one constituency that’s not at the table in these conversations are the workers themselves.”

The food service workers on college campuses – and elsewhere where private contractors are used – have no say, Nave said, and he wanted to find out what can be done to rectify that. It’s not a straight path, however, as Nave pointed out.

Campus dining isn’t a “fringe benefit;” it’s an expense that many students often can’t afford and didn’t ask for.

However, with the cost of university-managed dining services proving to be an astronomical amount, the commissions and bonuses offered by contractors are appealing, Nave said.

Mississippi Today reported that Ole Miss received approximately $10 million in commissions and delivered Aramark a little more than $117 million worth of meal plan patrons, cash operations and catering – all in just the last five years. These commissions are used to fund new facilities and improvements on campuses.

“It’s really the contractors who are driving the bus and offering contracts with these big commissions for the universities,” he said. “If you look at what’s happened over the last 10 or 15 years, there’s really no way that Universities can not contract out.”

Brown, who examined Ole Miss, Mississippi State University, the University of Alabama and Auburn University, said she found Aramark to be the common denominator between the four.

“Universities can no longer afford to do in-house dining,” Brown said. “But dining has been identified as one of those departments that they can just contract out.”

Brown also pointed out that Aramark’s reach extends beyond college campuses to the prison system, as the company contracts dining services for the incarcerated.

The benefits for students (who can afford a meal plan) and the universities themselves are apparent, but what about the men and women who prepare, serve and clean up the food?

Yurkanin, who writes for Al.com, reported on campus dining at a personal level. Yurkanin discussed the differences between and disadvantages that come with being an employee of the University of Alabama versus a contracted worker.

She presented the case of UA security guard Terry Poole and UA dining services worker Tacarra Davis. Davis first came onto the UA dining scene after going to a job fair and seeing that Bama Dining was hiring.

“It’s not widely known that ‘Bama Dining’ is the name for Aramark on the University of Alabama campus,” Yurkanin said. “(Davis) applied thinking it was going to be a university job. When she went to orientation, she realized that was not the deal she was getting… You don’t get the same benefits.”

Davis became a full-time employee, Yurkanin said, but still got laid off when the university was out for the summer, forcing her to subsist off food stamps and borrowed money. Even when she was working, her wages were not sufficient to allow her to afford health insurance or pay into a 401(k).

At the University of Alabama, those employed directly by the school can have their parking deducted from their paychecks, while Aramark employees must pay for their own parking permit or find another arrangement.

Poole, on the other hand, got a security guard job at UA, complete with all the benefits that come with being a university employee.

“As a university employee, he got… paid time off, paid health insurance and most importantly for (Poole), he got access to very good education benefits and tuition discounts,” Yurkanin said. “He took the job with the intention of working toward a degree in aerospace engineering. And that’s what he did; he’s more than halfway through with his educational program, and did it with a steep discount. He told me he saved around $80,000.”

The difference between the two? Contracts. And, as Bentley said, this story is not uncommon for others at major universities across the country. One attendee even pointed out similar issues at Spelman College, Morehouse College and Harvard.

Ole Miss boasts more than 20 individual dining options across campus – from fast food in the Student Union, which just received a $60 million facelift, to food court-style dining at the Rebel Market to convenience store finds at the POD markets – but according to Nave, Brown and Yurkanin, those options and advancements often come at the expense of the people who work there.