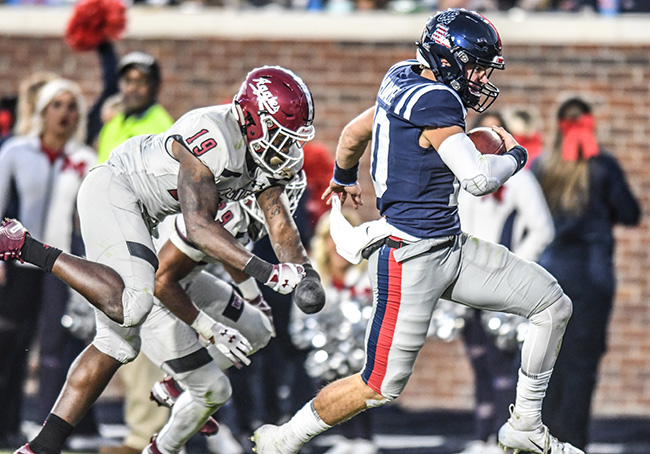 The Rebel freshman out of Oak Grove continues to surprise defenders with his speed.

Plumlee’s rushing momentum started early in the season against California and it’s only picked up of late. It took him just three starts to break the Ole Miss freshman rushing record for a quarterback, going for 470 yards over his first three starts.

In a season 10 games deep, Plumlee hit all these numbers playing in just seven of them.

“It sounds like those awards, the records, are all me. In reality it’s not,” Plumlee said. “The offensive line is really straining for me up front and doing a really, really good job. The wide receivers are doing their part. When they’re not getting the ball, they go and find someone to block.”

The 18-year-old quarterback has a point. On Saturday, he accounted for 177 of 447 Ole Miss rushing yards – it certainly wasn’t all him. Fellow freshman Snoop Connor hit a career high with 109 yards, and Jerrion Ealy put in 72 of his own. It’s a game where the offensive line was dominant, regardless of the level of competition.

Many of these Rebel rushing yards come off read option plays. As Plumlee described, they’re plays where he’s reading an edge defender, deciding whether to hand the ball off or keep it. When the running backs are playing well, as they were on Saturday, it makes that decision even harder for the defenders, opening up even bigger holes for him.

“The running backs they amaze me every week, hitting the hole hard every time,” Plumlee said. “When the running backs draw the defense to them, it makes it easy for when I pull it. There’s usually not a whole lot of people there and then the receivers do their job blocking. It sounds like a me record, but it’s really not. It’s a whole offense, a team award.”

Plumlee has seemed to cement himself as the team’s starting quarterback over the last two weeks. Since games against Missouri and Texas A&M, where he and redshirt freshman Matt Corral split time relatively evenly, Plumlee’s snaps have far outweighed that of Corral. Saturday, Plumlee started the game and didn’t come out until late in the third quarter when Ole Miss was up 31-3.

The Rebels’ passing attack still needs work. It was more efficient against New Mexico State, with Plumlee completing 11 of 17 passes. That 65 percent was his highest of the season in a game where he attempted over 10 passes.

Numbers say Ole Miss simply is not running a…