Blake Hinson to make season debut against Memphis on Saturday 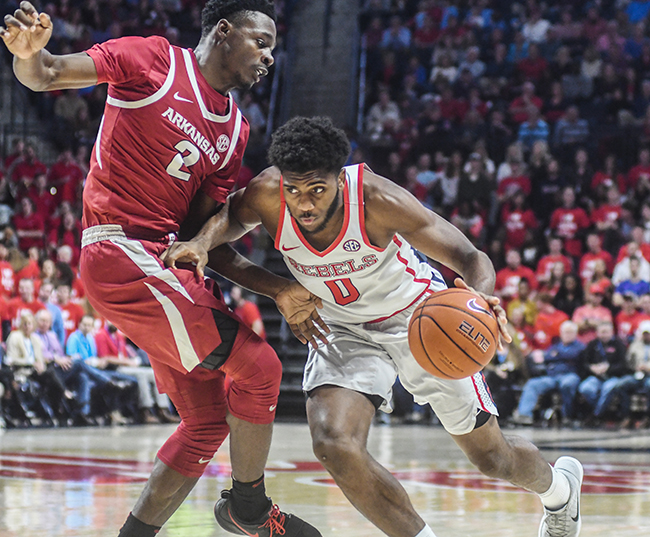 Ole Miss basketball forward Blake Hinson hasn’t been able to practice in full with the team since early August.

Finally, Kermit Davis said he is expecting the sophomore to be available when the Rebels travel to No. 16 Memphis on Saturday.

The team announced back in September that Hinson had been away from practices, dealing with what they described as a ‘blood abnormality.’ Hinson has been able to practice for the most part, but has not participated in full-contact team work since August.

Davis said he was hopeful to get Hinson back by this Tuesday’s game against Seattle, but that the whole process was taking a little longer than anticipated. Following the Seattle game on Tuesday, the head coach confirmed that Hinson will be available when the Rebels travel to the FedExForum this weekend.

It will take Hinson some time to adjust back to full basketball work, despite being able to participate in a good bit of non-contact practice. Yet, Davis said he doesn’t need to see a ton from this sophomore to get him back into the lineup. Really, Davis joked, Hinson just needs to get used to getting hit and falling down – just the normal day-to-day basketball contact.

After all, it’s been since around Aug. 8 that Hinson has done a full practice.

“There will be some game-shape readiness that he has to go through,” Davis said. “But it would just take a couple days (of practice). If he got Wednesday, Thursday, Friday or Thursday, Friday (of practice) before we played, that would be enough for me to get him in there against Memphis.”

This past weekend, Hinson went through a series of blood tests, analyzed by doctors around the country. It was his last step before being cleared to play. The team described that round of blood work as “positive,” and the confirmation that he’ll return to the team in full later this week confirms that.

Hinson hasn’t lost weight. If anything, the opposite happened. Playing last year around 225 pounds, Davis said he got up to around 245 throughout this process. It took some extra work, more running and a better diet, but he’s now back down to his playing weight of around 228 pounds.

“He looks great. He’s lost 16 or 17 pounds,” Davis said. “He worked his tail off and now he’s right back down and looks just like he did last year. He’s bouncy and he’s jumping better than he has been.”

Upon his return, the sophomore forward will likely take some time coming off the bench to ease back into game shape. Yet the expectation is that he will return to his compete for his starting role in which he started 31 games a year ago as a true freshman.

Ole Miss travels to No. 16 Memphis at FedExForum at noon on ESPN+.