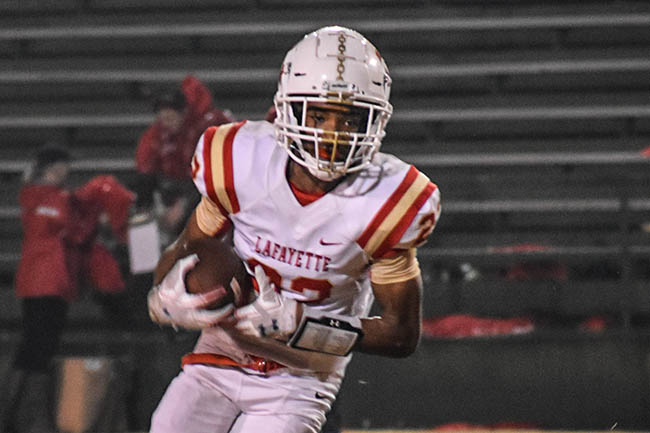 WEST POINT – Sometimes, all you have to do is take advantage when given the opportunity. When Lafayette is playing West Point, those opportunities never seem to be enough.

Lafayette capitalized on a few West Point miscues early, but like the meeting earlier in the year, they just couldn’t hold on when matters meant the most. Lafayette lost to West Point on Friday night 21-14, ending their season. The Commodores have lost to the Green Wave five times in three seasons. It’s now back-to-back years the Green Wave has ended the Commodores season.

“It’s just tough that we’ve come down here a couple years in a row, and this just seems so similar to what’s happened in the past,” head coach Michael Fair said. “It’s tough to play these guys anywhere, but it was a tie game going into the fourth quarter. Somebody was going to have to make a play, but for the last couple of times it’s been them.”

After slowly moving the ball to midfield in the opening drive of the game, Lafayette was forced to punt. In a series of mental errors, West Point decided to field the ball near the goal line. Instead of letting the ball bounce into the end zone for a touchback, West Point had to take over inside their own two.

Fighting for just enough yards to give their punter room, West Point would give the ball right back to Lafayette with incredible field position. When Lafayette gets fantastic field position, it often leads to a Randy Anderson touchdown. This was no exception.

Lafayette’s Randy Anderson on the last game of his Commodore career pic.twitter.com/RP1FJt6Yhf

West Point had no quit. All night, their ball carries proved tough to tackle, running through numerous Commodores. West Point would tie the game at seven on one of those runs before turning the ball over on their next possession – another opportunity for Lafayette to take advantage of the opportunities.

The ensuing Commodore possession included two of the best throws of Randy Anderson’s season, topped by a 24-yard strike to Kylen Vaughn. The game would go to halftime at that score, Lafayette leading 14-7.

As the second half started, the method was the same. It was just West Point getting the breaks. Randy Anderson muffed a punt early in the third quarter, giving West Point the ball at their own 12-yard line. Three plays later, Dantariyus Cannon was scampering nine yards for his second touchdown, the game-tying score.

“The way West Point runs the ball, it catches you off guard,” Anderson said. “They have a temp of hurrying up. When you try and catch up with it, it’s tough. But we stood up to them the whole game and put up a fight.”

Later in the third, with the game tied. Lafayette faced a critical 4th and 1 from the West Point six-yard line. Instead of taking the points and the lead, the Commodores instead went with a 4th down QB sneak. West Point saw if from the snap, stuffing Anderson before he even came close to the first-down marker.

The teams traded fourth quarter punts following the Lafayette turnover on downs, before West Point went into clock-chewing mode. Lining up in their full-house set with two full backs, the Green Wave churned for short gains. They then accentually busted a big one. Dantariyus Cannon, breaking tackles, scampered 56 yards for his third touchdown, the go-ahead putting West Point up 21-14.

“They have Cannon and (Harris) and some others,” Fair said. “West Point tailback is different than any other tailback that you’ll play. You think you’ve got them on the ground but you don’t. They do a great job and keep fighting. That’s why they’re successful.”

With the win, West Point has beaten Lafayette five times in the last two seasons. The Lafayette season ends in the second round, a record of 9-4. West Point will take on Neshoba Central in the North-half final next week.

“It’s just something for the younger guys on our team to build off of,” Anderson said. “They see how we (seniors) feel, so they can come back way harder.”