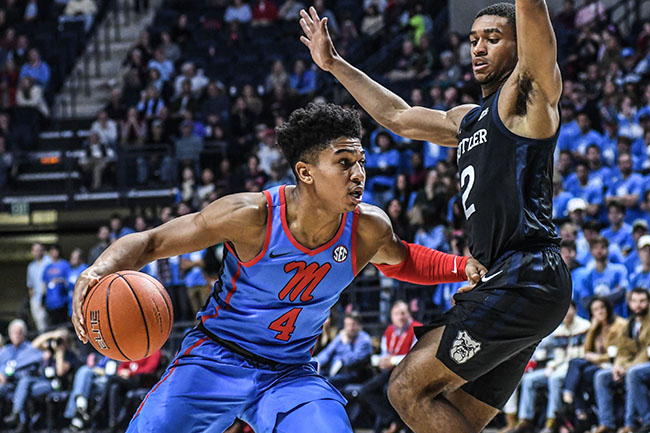 Over their last two games, a 41-point loss to Oklahoma State and a 9-point loss at home to Butler, Ole Miss has scored a total of 95 points.

Particularly troubling is the way they’ve opened games, and this part of the trend goes back more than just two games. Over the last three games, Ole Miss is averaging just 21.3 points per game in the first half. Against Penn State the day before Thanksgiving, the Rebels battled out of that hole to complete a 21-point comeback. In the two games since, the early holes have buried them.

Head coach Kermit Davis mentioned a few names Tuesday night after the Butler loss. In his eyes, Blake Hinson needs to be more consistent as a shooter and KJ Buffen needs to be more mature offensively. That said, for the Ole Miss offense to run smoothly and to get back to a good pace, it all starts and ends with the upperclassmen guard duo of Breein Tyree and Devontae Shuler.

“We’re not making shots. We have two guys who were named first and second team All-SEC and they’re struggling,” Davis said after the Butler game. “They’re struggling. Tonight they’re 10 for 26. We’re doing that a bunch right now. They’re trying, but right now the way our team is built those two have to score for us. They’re open; they were pretty open tonight. Devontae had a lot of good looks tonight. We just have to keep trying to do better.”

Shuler, in particular, has seen room for improvement as of late.

After hitting 54.1 percent of his shots over the first four games of the season, the junior point guard fell into a bad slump over the most recent four games. Starting with the loss at Memphis, Shuler has made just six shots in four games. He’s shooting just 17.6 percent over that stretch and has two more turnovers than made buckets.

As a sophomore in 2018, Shuler was one of the most improved players in the entire conference. Now, he’s in the midst of a tough stretch that he needs to break out of for Ole Miss to get back on track.

“Devontae competed, but he just can’t get it in the goal right now. He took a lot of good shots. We have to keep encouraging him to take really good shots, good opportunities around the rim,” Davis said. “You can’t break out of slumps by making tough shots. And I thought (against Butler), for the most part, he took good shots. … We just have to keep working and keep building confidence. If he was taking a bunch of really bad shots, I’d be more worried. But he’ll bounce back for sure.”

Be it simply making shots or finding ways to get out of the gate quicker, this Ole Miss offense problem is one that needs correcting fast. Losses to Memphis, Oklahoma State and Butler in the early part of the season aren’t ones that can ruin a team’s tournament hopes. But if this lack of offense continues in their next set of games against Cal State Bakersfield, Middle Tennessee and Southeastern Louisiana, the Rebels could be in some early trouble.