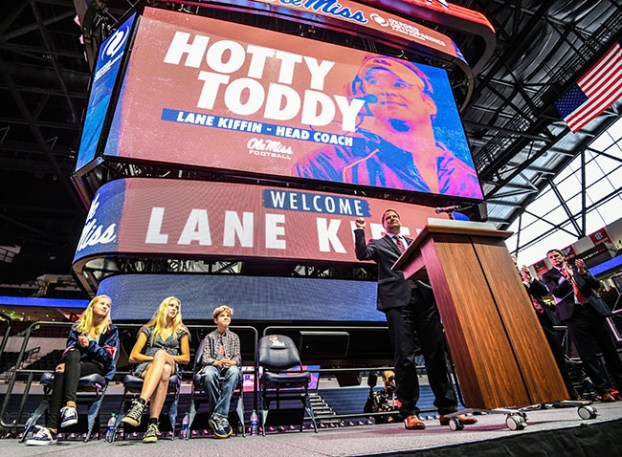 A few thousand Rebel fans packed into the Pavilion Monday afternoon to greet the new head coach at his first official public introduction that felt more like a party than a press conference.

Kiffin’s first words when introduced by Carter, were to ask any former All-American basketball players in attendance to rise. Carter’s reception was equally jubilant.

Kiffin, wearing his agent Jimmy Sexton’s navy suit and sporting a red and blue horizontal-striped tie, cracked jokes but largely was his more subdued and introverted self during the introduction. He’s laid back and speaks softly, not exactly the persona that matches his outward reputation.

He joked that he was only wearing Sexton’s suit because his nicer ones no longer fit – he “put on some weight” during his Alabama stint. Kiffin also spoke about his level of surprise and awe after seeing how many Rebel fans showed up to greet him Sunday night at the Oxford-University Airport. He also joked about how different that was than his last tarmac experience, related to his dramatic firing from the University of Southern California in 2013.

But more than anything, Kiffin said he was just excited to be back coaching in the Southeastern Conference.

From the moment Carter fired former head coach Matt Luke last week, he laid out the plan for finding a head coach that will put Ole Miss back on the national stage.

Kiffin, from the start, emphasized the ability to recruit nationally and bring the best possible players to Oxford, no matter where they’re from, and he also specified the ability to keep the best players in the state home. However, the Matt Luke “Mississippi Made” days seem to be behind Ole Miss. They’re going national.

When asked about the importance of the Egg Bowl, Kiffin essentially said he’s going to treat it like any rivalry game. There’s no extra level of importance to the game, in his words.

Kiffin also said he’s going to do things a different way from day one. Simply put, he wants to modernize the program.

“We’re starting today. This program will be built on old-school principles with a new-school mindset of how to do that,” Kiffin said. “We’re not going to do things a certain way because they’ve been done that way. We’re always evolving, whether it’s analytics, technology, recruiting, player development, sports science or game management at the highest level. We’re always learning and always evolving.”

Ole Miss got the man they wanted. Things in the Rebel football program are going to look much different than before. Now, it’s on Kiffin to deliver on those national brand ambitions.

As first reported by the EAGLE on Saturday evening, Grant Tisdale confirmed the news via Twitter on Monday afternoon that... read more