Khadim Sy getting more ‘comfortable’ with each Rebel game 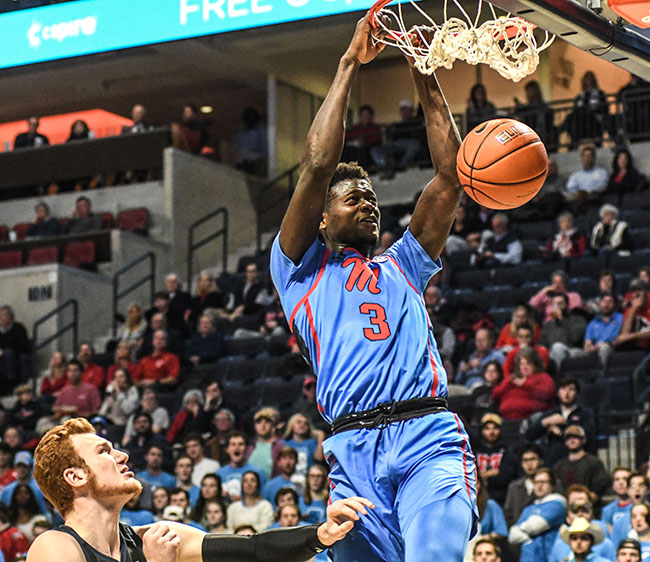 Sure, Sy is a junior on paper. That said, the 6-foot-10, 240-pound player from Senegal is really just in his second year playing division one basketball. A freshman at Virginia Tech in the 2016-17 season, Sy started in 28 games for the Hokies but averaged just four points. After redshirting in the 2017-18 year, Sy then transferred. Going the junior college route at Daytona State, he averaged 16.8 points and 9.8 rebounds in his lone season.

Now a Rebel, Sy has played at this level. But there’s been a little bit of an adjustment to Ole Miss and what coach Kermit Davis expected of him.

“I’ve only really played one year in the real D1 basketball,” Sy said. “I haven’t had the same competition that I used to have until I got here. I knew it wasn’t going to click right away. It’s a process, just taking it day by day. I’ve been trying to get better in the weight room, getting bigger, stronger and start getting more comfortable in coach’s system.”

That comfortability has increased with every game, every practice. Sy talked extensively of the struggles of learning Davis’ offensive scheme, saying Davis wants the ball to move and asks a lot as far as skilled plays are concerned with his big men.

As he’s gotten more adjusted to the system, he’s really taken to the new role.

“The last couple of weeks he’s made a lot of progress. In practice, and just playing through fatigue he’s gotten a lot better. We can hear his voice in the gym a lot more,” Davis said. “We need Khadim to be a more physical player around the rim, as far as verticality plays, blocking shots and rebounding in traffic. I know he’s going to get there, I really do.”

Last year’s Rebel team had more of that natural physicality. Terence Davis, now in the NBA with the Toronto Raptors, brought that physicality to every practice. As did former bigs Bruce Stevens and Dominik Olejniczak. The only true center on the Ole Miss roster, that’s a role Sy needs to embrace.

In a way, he’s almost done that too well? Sy is being physical, but what he’s still learning to do is pick his spots.

To this point in the season, Sy is averaging one foul for every 5.4 minutes he’s on the floor. Simply put, that’s way too many fouling and why he’s averaging just 21.1 minutes compared to the 26-29 the team wants him to be playing. Way too often, like when he played just four minutes in the first half at Memphis with foul trouble, he’ll pick up quick, cheap fouls. It’s the main area of improvement Davis needs to see from his best option at center.

“With (Khadim), he’s going to have fouls, but have them be good, physical fouls and not reaching fouls. We need him on the floor playing,” Davis said. “We’re really trying to emphasize that, showing him every foul he’s committed and emphasizing it in practice… I can see him making progress, he just needs to be on the floor more.”

That said, Sy is starting to catch on. His last two games have been his best two offensively. He has really good balance for a guy of his size and is comfortable catching and scoring in traffic. He’s even a capable shooting, shooting three for six on three pointers for the season.

More than anything, Sy is the team’s best low post defender and rebounder. The more Sy can be on the floor the better. The more comfortable he is in the Ole Miss system the better.

“At first, I was excited to be here. I’m still excited and happy to be here. But at first I wasn’t that comfortable,” Sy said. “As soon as I got that figured out, everything has changed. I see what he wants for us. I know what I need to do to get better individually and I know what I can do to make the team better.”