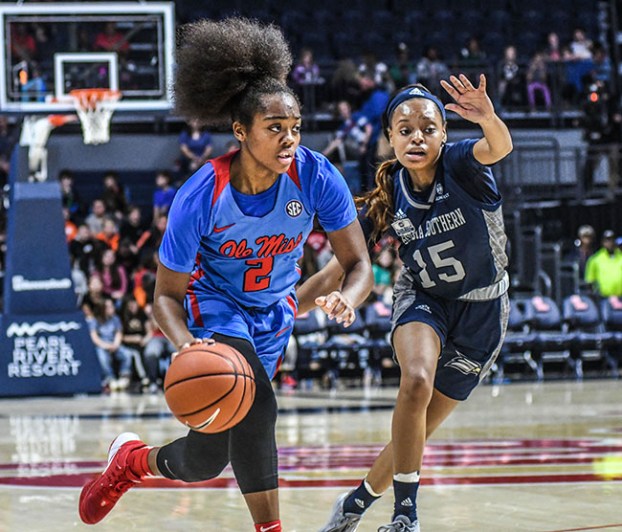 Monday afternoon at The Pavilion was a bit more high-pitched than a standard Ole Miss basketball game.

Schools, mostly elementary and middle, from Batesville to Pontotoc came by the busload to The Pavilion on Monday to watch the Ole Miss women’s basketball team beat Georgia Southern 69-66 in overtime.

“It gives the kids a nice little break from being stressed out over exams,” said Allyson Grubbs, a teacher at South Pontotoc Middle School. “They’ve had two benchmark tests and two again on Tuesday. So for today, they just get to breathe and get a break from the classroom. For a lot of them, it’s giving them something they wouldn’t have otherwise had a chance to do.”

For Grubbs, it’s her first year with the school and first year attending Kid’s Day. However, South Pontotoc Middle School has been coming for four or five years, her colleagues say.

Generally, it’s just a nice little break or even an incentive. Teachers from other schools, Ingomar School District for example, use the trip as a reward for those with good test scores.

In total, the team had 6,574 in attendance on Monday, mostly students. Ole Miss officials said they had reservations for over 8,000, but had some day-of cancellations due to weather concerns on Monday.

“It’s the best day ever. I told our players they had a responsibility to be a positive example today and play the game the right way for these kids,” head coach Yolett McPhee-McCuin said. “Not only just the girls, but boys too. I just think sports have a way of teaching respect, no matter the race or the gender. It was pretty cool to see them come out and cheer. I hate that we had to go overtime, because they had to leave. Wish they would’ve been able to stay to the end.”

On the court, McPhee-McCuin openly admits this Rebel team is still putting the pieces together and learning how to win. Monday afternoon’s game goes a long way in that regard.

A back-and-forth game marked by a handful of key runs by both teams, Ole Miss took a 30-26 lead into half. Coming out of the break, Georgia Southern was able to retake the lead with a 10-0 run of their own, before the final portion of the third quarter was characterized by four lead changes and a stretch of tied basketball.

In total, it was the most back-and-forth game the team has played all year, featuring 10 lead changes and four ties.

The Eagles reclaimed the lead for the first time in the fourth quarter with 7:33 remaining off of two intentional foul free throws. Unlike the third quarter, when the lead bounced around, Ole Miss immediately went on an 11-3 run once they fell behind.

Leading by as much as eight points late, Ole Miss nearly let the game get away. A Georgia Southern and-one and subsequent layup cut the lead to 59-58 with 1:13 to play. An Eagle layup off an offensive rebound with 23.7 seconds to play tied the game at 60-60. The game went to overtime tied at such.

Ole Miss scored the first six points over overtime to seal the 69-66 win. Despite all the lead changes, the Rebels never trailed by more than two points.

“I thought we handled adversity well,” McPhee-McCuin said. “This game is huge. It doesn’t matter the opponent right now… we responded in the right way. There was never a moment for me that I felt like we wouldn’t win this game.”

Valerie Nesbitt and Torri Lewis led the Rebels with 16 and 14 points, respectively.

The win snaps Ole Miss’s three game losing streak, taking them to 6-5 on the season. Following the win, the Ole Miss women stay at home for their next three games. Next up is a Friday meeting with the University of Louisiana-Lafayette at 7 p.m., the team’s third game in seven days.

The Ole Miss women’s basketball team could not find an edge against a consistent Southeast Missouri squad, falling 70-53 at... read more