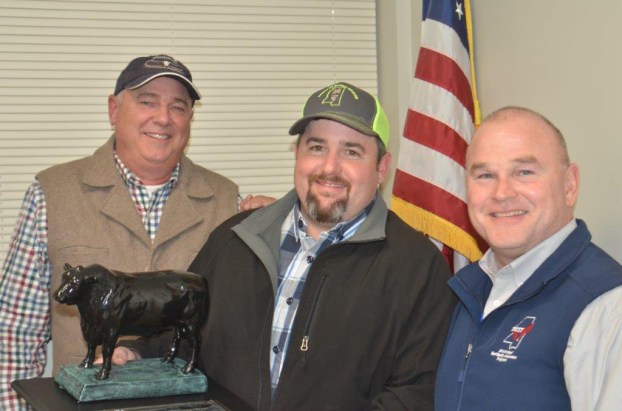 The Lafayette County Cattlemen’s Association held its annual meeting earlier this month, and handed out yearly awards while enjoying a nice steak dinner.

During the meeting, which takes place the first Thursday of December, the association named their 2019 Cattleman of the Year, Zack Mills.

Mills, 31, raises 69 cows along with his father, Scott, and his grandfather, Wayne, and is currently the livestock inspector for the Mississippi Board of Animal Health. He showed commercial heifers throughout his time at Lafayette High School and served as the school’s Future Farmers of America president from 2006 to 2007.

Each year, the Cattlemen’s Association discusses among themselves who would be worthy recipient of their top award. Some years, that discussion is a difficult one.

“We don’t have enough cattlemen in the county, really. We struggle at times to come up with somebody,” said James Redding with the Lafayette County Cattlemen’s Association.

Since 2018, the association has stayed about the same numbers, but continues to fight to increase their ranks.

There is also a raffle given away during each meeting, where the winner receives $650 worth of beef, courtesy of Larson’s Cash Saver and Sherwin Haynie. This year’s winners of the raffle were Jewell and David Goss. The money raised in the raffle goes toward an annual scholarship which is presented to a senior at either Oxford or Lafayette High School. Mississippi’s Cattlemen’s Association awards $75,000 a year in scholarships throughout the state. Sales of the Cattlemen’s Association vanity car tags are a large portion of the money that goes toward those scholarships.

A quail hunt at the Little “q” Ranch was also donated for auction by Joshua Quong. The winner, and highest bidder, of the hunt was David Houston.

“We don’t have county dues,” Redding said. “We just work off of this fundraiser and annual event and when we have a meeting, we’ll sometimes ask people to chip in five dollars or something to help out.”

Recently, the association formed the Lafayette County Livestock Recovery Team. The purpose of the team is to help when farmers or cattlemen have their livestock get loose during a storm or natural disaster. New association president Glen Callahan has been very active in getting the team formed and set up.

The team will cover the entire county, and if anyone needs assistance with their livestock, they can contact Callahan or anyone associated with the recovery team. For example, if someone has their fences or land destroyed by a storm, such as the ones north Mississippi experienced on Monday, they could contact the team.

“When we have a disaster (like we did Monday), no matter if it’s high winds or tornadoes or flood or whatever, we can go to these different areas and help recover these animals off the highway or (from drowning in a flood),” Callahan said. “We can relocate them for a few days.”

The team is made up of “just about every member we’ve got,” according to Callahan.

During the final Lafayette County Board of Supervisors meeting of 2019, and of this decade, there were several key personnel... read more