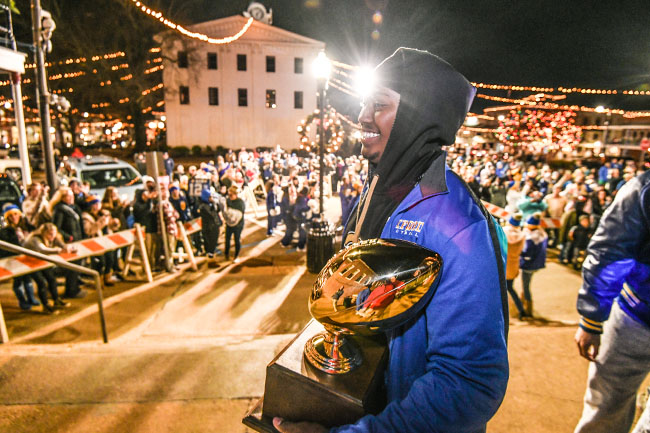 Around 100 people braved the 30-degree weather in the evening to welcome the Chargers home, celebrating the team’s first championship.

“As I told many of these guys, you did not win this trophy just for yourself. You won it for your whole community,” said Mayor Robyn Tannehill, whose son, Jack, kicks for the team. “We’re so excited that you brought that championship back to (Oxford). Go Chargers!”

In addition to the Mayor, Oxford head coach Chris Cutcliffe and a few players spoke at the gathering held in front of City Hall under the Oxford canopy of lights.

The school’s cheerleaders and dance team were also in attendance, leading the gathered crowd in the Oxford fight song.

“A huge thank you for Mayor Tannehill and the City of Oxford for all the great things you’ve done for our players over the last week,” Cutcliffe said. “Our group of seniors, in particular, is a really big group. It’s a big senior class that’s played together for a long time. But this year, they had their eyes on their senior year and what they could accomplish the whole time. … I want to thank that group of seniors for what they did and what they left behind with Oxford football.”

The team finished their 14-1 season on Dec. 6 with a 32-21 comeback win over Oak Grove to cap the miracle season. A miracle season that will forever be ingrained in the hearts and minds of many on the team.

“On behalf of the captains and the football team, we appreciate everyone that came out this season and supported us,” senior Kiyon Williams said. “Thanks to the 12th man, who came and brought everyone down to the state championship game. We’ll always have love for Oxford.”