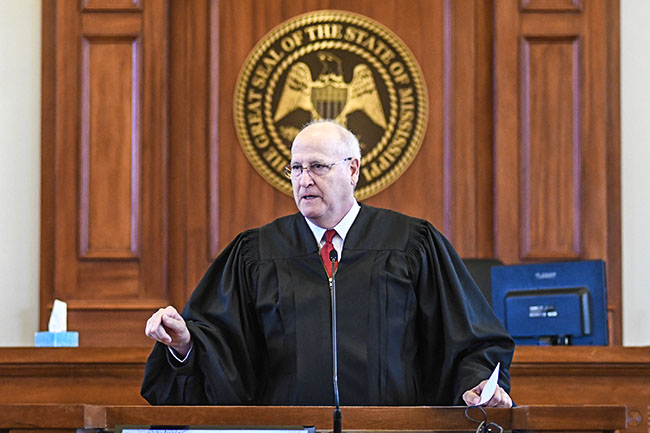 Judge Andy Howorth speaks at an oath of office ceremony at the Lafayette County Courthouse in Oxford, Miss. on Tuesday, December 30, 2019. Howorth announced on Monday that he plans on retiring from the bench on June 30. (Bruce Newman, Oxford Eagle)

After nearly two decades of service in the Circuit Court, Judge Andrew Howorth is calling it a career.

Howorth announced his intention to retire as a judge in the Third Judicial District of Mississippi later this year in a Facebook post on Monday morning.

“I’ve never posted anything on Facebook, but seems like a good way to let my friends know that I am planning on retiring from the bench on June 30,” Howorth’s post read. “I have very much enjoyed the last 18 years as a circuit court judge, but I have a farm in Abbeville that calls my name nonstop. I also have a bucket list that has many things not yet checked off. Elizabeth and I plan to enjoy working on that.”

During his time as a judge in the circuit court, Howorth founded the Lafayette County Drug Court in 2007 where he spent every Thursday helping to rehabilitate convicted drug felons. In November of 2018, Howorth was appointed by the Supreme Court of Mississippi to serve on the State Drug Court Advisory Committee.

Prior to entering the judiciary system in 2002, Howorth had a private practice where he represented defendants and plaintiffs in civil litigation.

Last May, he was named the 48th Citizen of the Year during the Lafayette County Chamber of Commerce and the Economic Development Foundation’s annual luncheon. Howorth was honored for his service as a judge and his work with the drug court.

“I love my town, and I feel like it’s my town honoring me and, obviously, that means everything,” Howorth said at the luncheon. “We’ve been doing drug court for 11 years and it’s been a life-changer. … Your hope is if you can treat the addiction, then you can solve the criminality and the person that’s committing the crimes and is also an addict. They can find recovery then they quit breaking the law then they become productive citizens the community wants. It works pretty well.”

Jeff McCutchen to swear in as new Oxford Police…