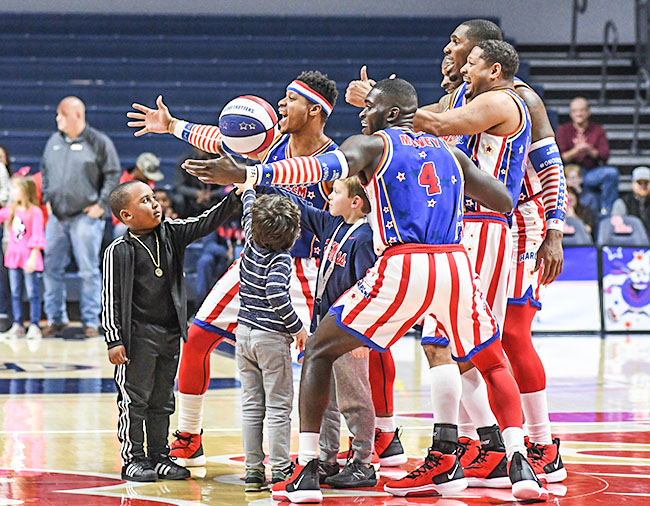 Kids hold up a spinning basketball while surrounded by the Harlem Globetrotters at the Pavilion at Ole Miss on Thursday, January 16, 2020. (Bruce Newman, Oxford Eagle)

The world-famous Harlem Globetrotters brought their 94-year tradition to Oxford on Thursday night, placing a sort of sparkle in the eyes of some young children in a way that only a little bit of silly theater can do.

In beating the Washington Generals, as they almost always do, the exhibition basketball team that’s performed in more than 124 countries had their talents displayed at The Pavilion on Thursday.

“Wait. Where are y’all headed?” asked one of the members of the team, live and wearing a microphone so that all in the stands could hear.

“One or two?” responded the Globetrotters. “We’re about to start, so one can wait.”

It’s that sort of interaction that’s drawn fans from around the world to see the Globetrotters. They have a way of mesmerizing children. From high-flying, circus-act-like dunking routines to a thrilling four-point shot, it’s not a standard basketball game as much as it is a scripted display of theater on a basketball court.

Players and referees, who are in on the action, wear microphones. If the Globetrotters don’t like a call by the officials that goes against them, they’ll quite literally just grab the ball and walk off the court. They’ll single out members of the crowd – one man sitting in the first few rows with a spiked-up mohawk was ‘Spike Lee’ for the entire evening. They even went into the crowd to grab some children and make them part of the action.

Call it basketball, theater, comedy or just sheer forces of athleticism – truly, the Harlem Globetrotters are just entertainment, and they sure entertained on Thursday night in the Pavilion.