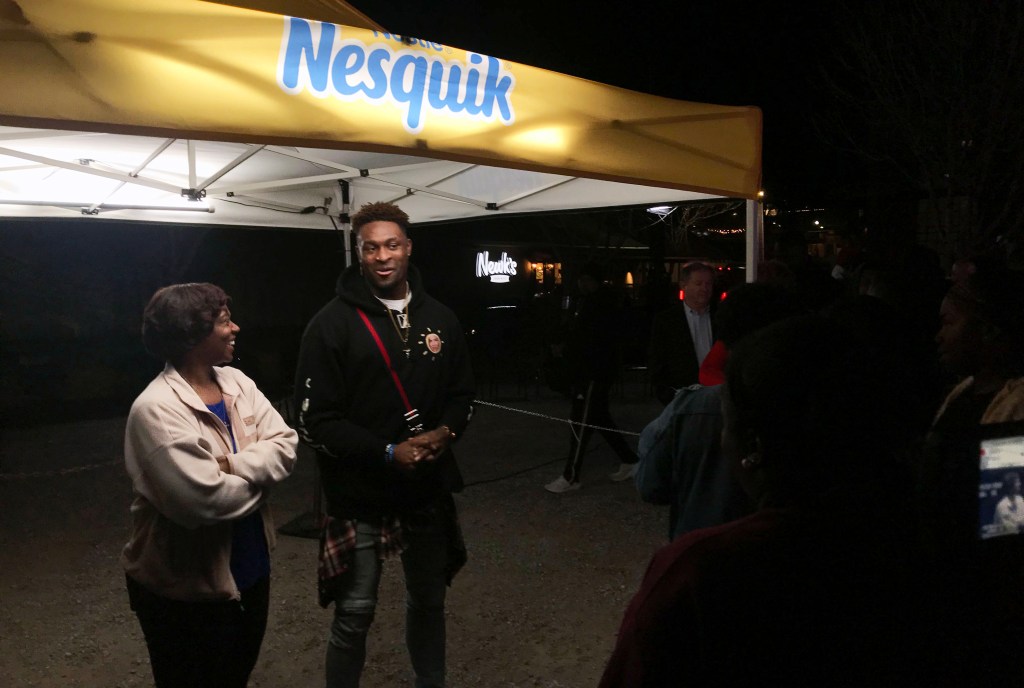 DK Metcalf thanks those who attended the “Hometown Hero: DK Metcalf” event hosted by Nesquik. The event took place outside the Powerhouse, celebrating the forrmer Oxford Charger and Ole Miss Rebels’ rookie season in the NFL. (Jake Thompson/Oxford Eagle)

Two weeks removed from his rookie season coming to a close, DK Metcalf returned to Oxford and unbeknownst to him, a celebration in his honor was scheduled.

With family, friends and former coaches huddled around him in the Powerhouse parking lot on Saturday, Metcalf watched a video featuring some of those same people congratulating him on his success.

Holding back tears and surrounded by his parents, Metcalf thanked everyone for coming. The event was a complete surprise to the former Oxford Charger and Ole Miss Rebel.

“I had no idea. This was really special,” Metcalf said. “It meant a lot to me that all these people came out.”

The event, “Hometown Hero: DK Metcalf,” was put on by Nesquik. Metcalf is the only NFL player who is endorsed by Nesquik and the company produced many commercials throughout the NFL season, featuring Metcalf.

The film, which lasted around 15 minutes, featured Oxford head coach Chris Cutcliffe, former Ole Miss head coach Matt Luke, Metcalf’s family and others. The mini-documentary chronicled Metcalf’s time playing for the Chargers, then for Ole Miss and eventually ending up with the Seattle Seahawks.

Clips of Metcalf’s commercials for Nesquik, which centered around the chocolate milk makers’ credo of “Keep on Chuggin,” also played throughout the documentary.

Metcalf’s foot and neck injuries were highlighted in the video, and how he overcame both to return to football. The now-viral video of Seattle head coach Pete Carroll calling Metcalf during the second round of the 2019 NFL Draft was included and met with many cheers.

Seattle saw their season end two weeks ago, losing to Green Bay in the Divisional round of the NFL playoffs. Metcalf finished his rookie season with 58 receptions for 900 yards and seven touchdowns. He played in all 16 games, starting in 15 of them.

“It was everything I hoped it would be. That first season was something special,” Metcalf said. “We’re going to do big things.”