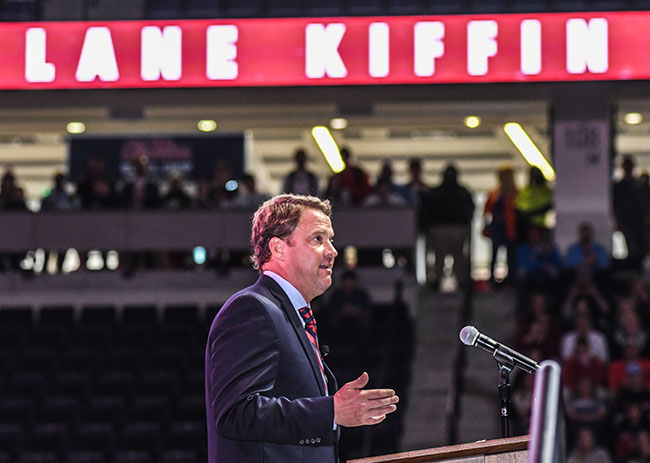 Wednesday marks Lane Kiffin’s final chance to place his stamp on the Ole Miss football program via the 2020 recruiting class.

As the day progresses, this tracker will be updated with those Rebels that make their commitments official in ink by singing their national letter of intent, as well as information on some (i.e. five-star running back Zachary Evans)  who are yet to be decided and have Ole Miss in the mix.

We will also touch on where these new Rebels fit in within their specific position groupings and potential roles moving forward. Check back throughout the day, and with @nategabler on Twitter, for updates.

Clowney is actually one of the early enrollees and has been on campus already. Shouse, along with Parrish, was one of the hard commits coming into the day.

Parrish is the biggest name to land with the Rebels to this point on National Signing Day. A four-star running back, Rivals rates Parrish as the nation’s No. 10 running back and the No. 149 overall player. The running back room may be the best position group on the Ole Miss team in 2020.

Ward’s recruitment was relatively wide open entering the day, holding offers from Arkansas, Texas A&M and Oklahoma. Instead, he becomes the fifth offensive lineman in the Rebel class.

This one is a tough loss for the Rebels. Branch, a three-star corner, had been committed to Ole Miss since November. Instead of holding that commitment through the coaching turnover at Ole Miss, he’s going to Athens.

Melton, a Houston, TX product, becomes the fourth offensive lineman to sign to Ole Miss for the 2020 Class. Melton chose the Rebels over Texas Tech, Houston and others.

Daniel, a high school and junior college teammate of Gill, was the last Rebel to publicly announce on Wednesday. He picked Ole Miss over Louisville, West Virginia and others.

The likely last commit of the early signing window for the Rebels comes by way of Jones College. The ex-Louisville, MS product chose Ole Miss over other offers from Louisville, Purdue and others.

Heritage Academy’s Eli Acker, despite being just a three star, is the best offensive line recruit in the state of Mississippi for the 2020 class. Inherently, it’s arguably the biggest signing of the day for Ole Miss. Acker committed to Ole Miss back in May of 2018, but since took visits to Notre Dame, Alabama, and just earlier this month an official visit at Mississippi State. Keeping Acker’s commitment is a big one.

Bullock announced on Twitter yesterday that he would be coming to Ole Miss after a prior decommitment. He’ll join a running back room that, with Scottie Phillips’ graduation, is entirely Jerrion Ealy’s to dominate. However, there will be some other non-Ealy touches to hand out.

This one hurts for the Rebels. Hayes was committed to Ole Miss for quite some time, decommitting in October. He was on campus in Oxford last weekend for an official visit but in the end chose to go to Kentucky.

Brown never wavered on his signing and commitment with the Rebels. He chose Ole Miss over Auburn, Mississippi State and others and will add to the versatile Ole Miss linebacking core.

Inside linebacker is one of the deeper positions on the Ole Miss defense, especially with the healthy return of MoMo Sanogo. With his return for 2020, the Rebels will have three between Sanogo, Lakia Henry and Jacquez Jones that have played a lot and played really well.

The backyard product is heading to the neighboring state. Ole Miss, who graduated two tight ends, could have certainly used the Oxford product. Strangely, Pegues said he never spoke to Kiffin. More on that to come later.

The Rebels graduated three offensive lineman, two of whom were starters, from last year’s team. Braun, at 6-foot-7 and 308 pounds will help add some needed depth there. Of the two defensive lineman, Rollins in particular could see some playing time next season with Josiah Coatney’s graduation.