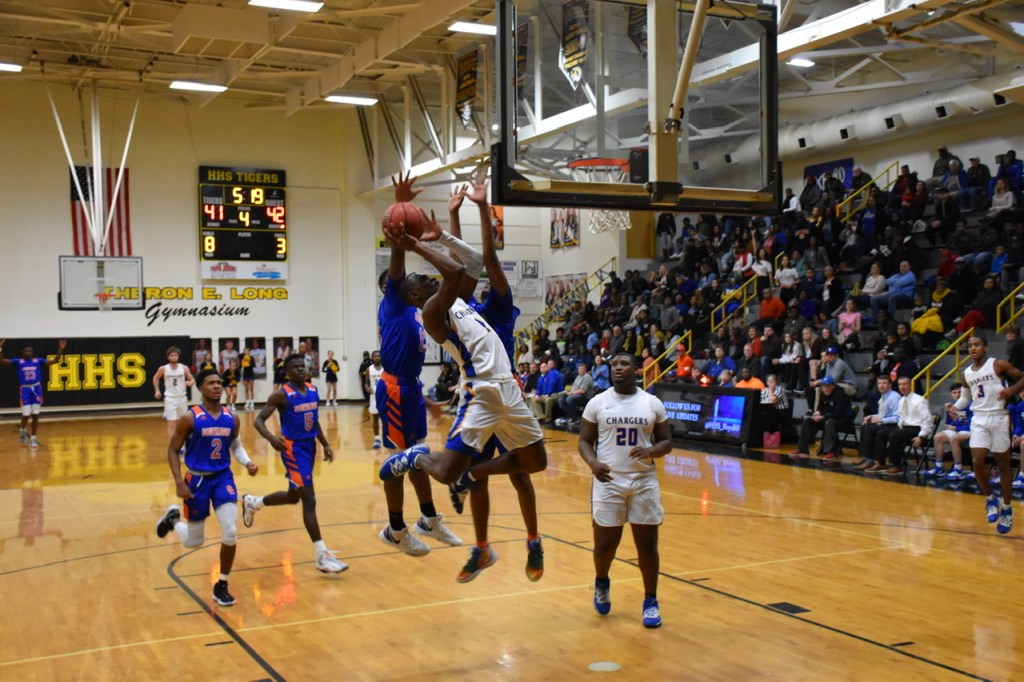 HERNANDO — Both Chargers teams left DeSoto County without a Region 2-6A trophy on Friday night. They’ll have to endure a quick turnaround to beginning postseason play at home early this upcoming week.

The Lady Chargers (14-14) did all they could against a big and athletic Hernando squad on their home court. It wasn’t quite enough to pull off the upset, as they fell 58-47 in the Region 2-6A finals, ending a four-game winning streak.

In order to try and keep Hernando off the board, they had to play keep-away from a pair of tall Hernando forwards by applying half court pressure and capitalizing off turnovers.

“I thought whenever we stayed in our zone and had the right personnel of the floor, we had a chance to really affect the tempo of the game where they couldn’t get up and down or look inside,” girls head coach Cliff Ormon said. “They really wanted to get inside. It really dictated tempo.”

Eventually, they were faced with serious foul trouble late. Anieya Heard fouled out late in the third quarter and Caliya Toles played with with four fouls.

“We had to go to the bench. Our bench really stepped up for us. At this time of year, it’s next man up,” Ormon said. “They showed they they wanted to be in this game. They weren’t afraid of the moment.

Despite the loss, the Lady Chargers will still be playing postseason basketball for the first time since 2017. They will be the No. 2 seed in the Class 6A playoffs starting Tuesday.

“We have to make sure this game doesn’t affect the next one,” Ormon said. “Our focus for the last few games has been tremendous as far as staying with the game plan and being confident.  We hope we have a great home crowd. These girls have earned the opportunity to play at home.”

For the third time this season, Oxford took Southaven to the wire. However, they were left with the short end of the stick Friday.

Despite a valiant defensive effort, the Chargers (22-8) were outdone 53-49 in the Region 2-6A Tournament finals.

The Chargers were able to correct what nearly cost them in Tuesday’s matchup by minimizing second chance points, but missed several opportunities to pull away.

“I thought we played some of the best defense we’ve played all year by holding them to 19 halftime points, but the flip side was that we scored 19 points,” boys head coach Drew Tyler said. “We did a good job mixing up our defense, but we had way too many missed trips offensively with missed free throws and chip shots near the basket. You can’t do that in a low scoring game where every possession is of high importance.”

The first half was full of swings. The Chargers opened the game with a 7-0 run, which was followed by a 7-0 run by Southaven. Oxford then proceeded to begin the second quarter with an 8-0 run. Eventually, they were not able to keep up down the second half stretch, especially when free opportunities were given to them.

The backcourt carried most of the load for the Chargers. Kylan Blackmon led the team with 26 points and nine rebounds. Tykel Owens had 12 points and six rebounds.

The Chargers will have the No. 2 seed and will turn around Tuesday to face their first round opponent.