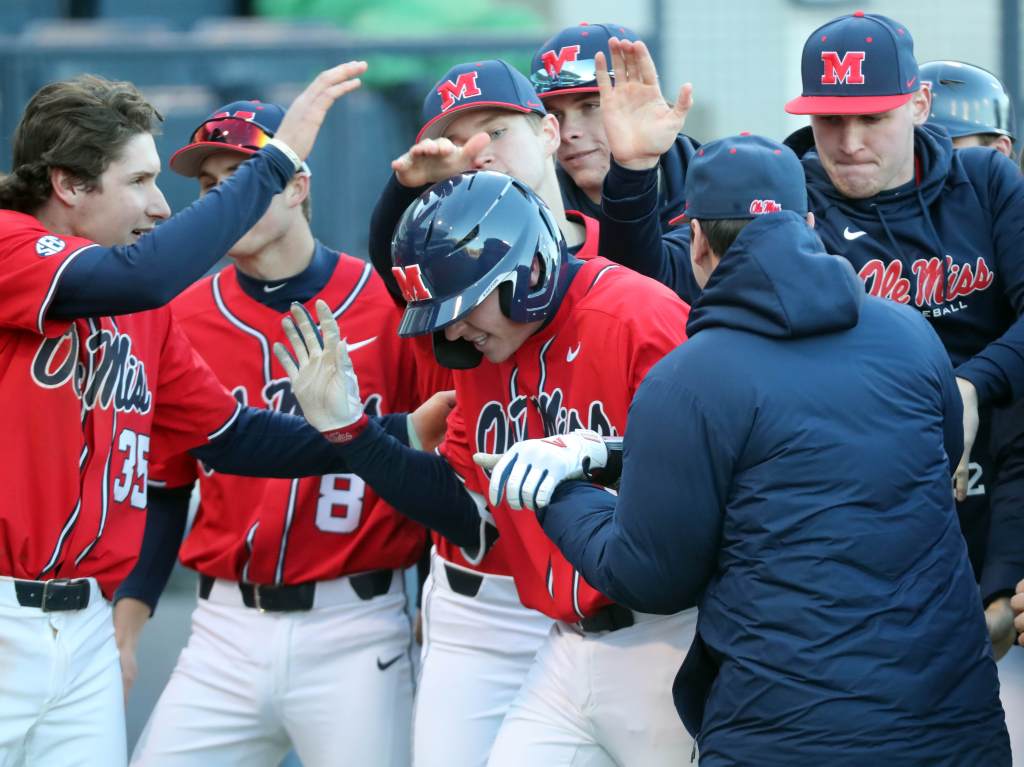 Ole Miss climbed to No. 15 in the D1Baseball polls after their three-game sweep of the visiting Xavier Musketeers over the weekend.

A team that opened the year ranked No. 25 by D1Baseball has jumped 10 spots in seven days of baseball played. A midweek scare against Alcorn State didn’t slow down the Rebels at all, pummeling Xavier over the course of three days to advance to 6-1 on the season. Here are four takeaways from the sweep.

1. Could a series win be any more dominant?

Really, this was as dominant of a performance as possible. Over the course of three games, Ole Miss outscored Xavier 35-3. The Rebels had more home runs in the series (nine) than the Musketeers had hits (eight). On Friday night, three Rebels pitchers led by Doug Nikhazy, combined to no-hit Xavier in a 13-0 win. On Saturday, the pitching was just as good. Ole Miss struck out 18 batters on Saturday, the most by a Rebels team since 2017, led by Gunnar Hoglund’s career-high 12 strikeouts. Sunday looked to be more like a well-contested baseball game, until Ole Miss blew it open with an eight-run fifth inning en route to another 13-run performance. Simply a dominant weekend for the Rebels.

2. This starting pitching rotation could border on elite

As mentioned, Doug Nikhazy didn’t allow a hit on Friday night. The sophomore, coming off a Freshman All-American season, struck out nine over six innings. Every single pitcher is on a strict pitch count at this point in the season, or there’s no reason to think the sophomore couldn’t have gone another no-hit inning. Nikhazy wasn’t at his best against a better Louisville team, allowing five hits and four runs, but if his season settles in the middle of that performance and a no-hit outing, that’s more than good enough. Hoglund’s added slider has been huge, a big reason he struck out 12 batters over six innings and needed just 88 pitches to do so. Then on Sunday, freshman Derek Diamond was fantastic again. He hasn’t seemed to miss a beat in the transition to college ball, allowing just one run on a hanging breaking ball that Xavier took for a home run.

3. Hayden Dunhurst broke out of his mini-slump in a big way

Going into the weekend against Xavier, Hayden Dunhurst was hitting 0 for 11. The defense had flashed, but the freshman catcher had yet to hit the ball. That changed quickly, as Dunhurst had two hits on both Friday and Saturday, including home runs on both days. Overall on the weekend, Dunhurst went 4 for 10 with two home runs and eight RBIs. Any tiny issues at the plate to start the year seem to be behind him.

As for issues behind the plate, the pair of two-sport athletes seem to be a great test-case. Through 15 combined at bats, Jerrion Ealy and John Rhys Plumlee have one hit. Defensively, Ealy has shown great promise. At the plate, he’s only 1 for 8. That said, he has drawn four walks. On the other hand, Plumlee is 0 for 7 at the plate with five strikeouts and has yet to draw a walk. It makes sense that these two would take longer to get to full-speed – they didn’t have a full fall of practice, yet it hasn’t been pretty thus far on the season.

Next up for the Rebels is their first in-state test of the season. The team welcomes Southern Miss to town on Tuesday, a 4 p.m. meeting with the 6-1 Golden Eagles. The teams play twice this season, this Tuesday in Oxford and again on March 31 in Pearl.