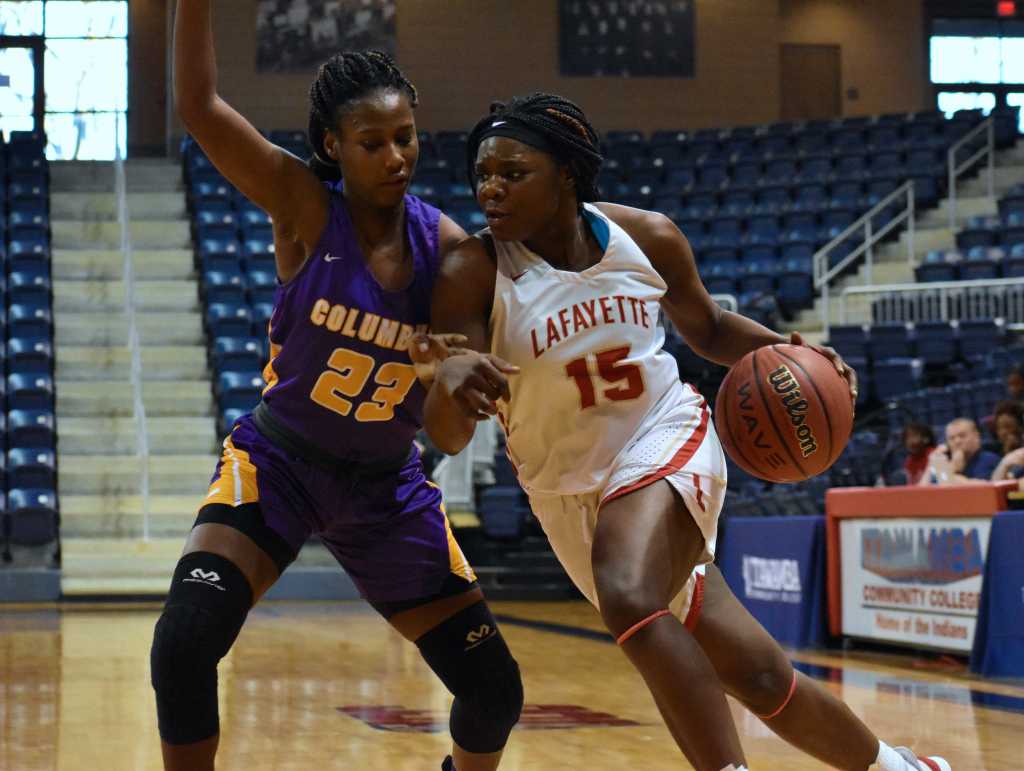 FULTON – Late game mistakes can be brutal. They can end seasons, and they can make heroes. On Saturday afternoon at Itawamba Community College, both happened.

Holding a one-point lead with under 50 seconds to play, a mental lapse by Lafayette’s Azariah Buford turned the ball over, giving Columbus two free throws to take a lead. Buford had her own redemption, a free throw to tie the game back up.

But with 1.2 seconds left, it was Columbus senior Aniya Saddler rising up, pulling up and hitting a jumper to end Lafayette’ season with a 39-37 loss in the MHSAA 5A State Quarterfinals.

“We made more mistakes than they did, self-inflicted mistakes,” said head coach Shayne Linzy. “The girls, I’m proud of them. They played extremely hard. But it was just too many mistakes on our end down the stretch.”

Different looks can change an entire dynamic. On Saturday, they simply slowed down the game and limited scoring. The Lady Commodores hadn’t seen much zone this year. They definitely hadn’t seen one that was anything like the one Columbus played.

It’s not a normal zone look the Falcons employ – it’s sort of like a 2-3 zone look, except the point girl drops down to the free throw line to almost resemble the layout of five dots on a die.

From the get-go the Lady Commodores looked a little perplexed by it. They had practiced the zone, they knew it was coming. But when it came time to actually play against the zone, Lafayette struggled to penetrate the zone, often settling for outside jumpers to try and shoot overtop it.

“They’re so long-armed and they spread it out. We’ve played taller teams playing a zone, but the way they played it made them seem even taller,” Linzy said. “They looked tall and they played like it defensively.”

Early, a few of those jump shots hit and the Commodores took a 7-6 lead. However, when the shots stopped falling, Columbus went on their runs, like an 11-0 one that saw them take command after the end of the first quarter.

But Lafayette settled in – they weren’t ready to let their season end so quickly.

Fueled by some stops and steals on the defensive end, Lafayette did a better job in the second quarter getting to the rim, sparking a run of their own to cut into the deficit and bring the Columbus lead down to just 25-21.

The third quarter was slow. With the Falcon zone preventing Lafayette from getting much of anything in the half-court, the only real offense coming in transition. Lafayette, trailing 25-31, scored the final six points of the quarter, all on transition layups, to send the game to the fourth tied at 31 a piece.

A three pointer to start the quarter and a huge driving layup form Azariah Buford gave the Commodores a four-point lead early in the quarter. Then, the ending happened. A turnover to set up the go-ahead Falcon buckets and an eventual heartbreaking buzzer-beater to end things.

“That’s just part of the game,” Linzy said. “Credit Columbus. That’s heck of a ball club. We wish them the best of luck.”

With the loss, Lafayette’s season ends in the 5A quarterfinals for the second consecutive year at 21-6. Columbus will play the winner of Neshoba Central and Vicksburg on Tuesday.