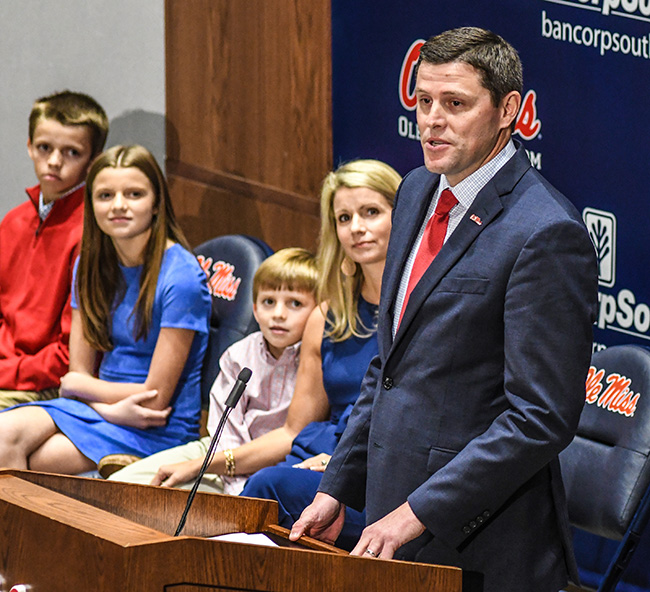 Still operating under a cloud of ambiguity, the Ole Miss athletics department is acting as if the spring sporting period is all but over and will not be coming back.

It’s been four days since the NCAA made the declaration that they would be canceling all winter and spring championships, including the NCAA men’s and women’s basketball tournament. It’s been three days since the Southeastern Conference pushed their potential restart date for spring sports until April 15. Now on Monday night, Ole Miss and athletics director Keith Carter seem like they’re moving forward under the assumption that spring sports will not be happening whatsoever.

“With championships closed down and us recommending our student athletes to stay home and shutting down our facilities, it doesn’t really lend itself for us to continue playing in the spring,” Carter said. “We feel like spring is probably finished.”

Carter and other athletic directors from across the conference are holding a conference call every morning at 11 a.m. right now, trying to map out the future.

Right now, all Ole Miss coaches and athletic department staff are officially working from home. They’ve taken the last few days to make sure they find the right resources for the athletes moving forward. Recently, they turned their attention to making decisions regarding their staff.

Their next steps will be turning their focus to the summer and fall from a planning perspective, and dealing with economic ramifications. There’s no sense in speculating, but those economic losses are something Carter said they know will be substantial.

“We’re trying to salvage these sports and these practices, and those types of things. Obviously, we want to do everything we can to do that. But the bottom line is, we have a pretty major issue on our hands that has nothing to do with sports,” Carter said. “At the end of the day, we have to figure this thing out on a much more global level. I have to take my AD hat off a little bit, and think more from a personal and medial standpoint. We have to do everything we can to help this thing go away.”

Carter said the decision to cancel spring championships by the NCAA caught everyone off guard, including those in the SEC league office. Greg Sankey himself found out about it the same way much of the public did – through social media.

Ole Miss had a spring football game scheduled for April 18. That game has already been postponed. Carter said it’ll “likely” be canceled.

When asked what kind of value having a potential restart date of April 15 holds, Carter was pretty clear that there’s not much value to it at this point. In his tone and wording, they’re operating as if spring sports are not happening.

“I think that by talking with the SEC that conversations are probably heading in that a direction,” Carter said, talking the potential of extending the restart date again or canceling the spring season altogether. “We just haven’t put our foot on base yet. I would anticipate that probably happening at some point. If we’re going to put off practice or training until April 15, it’s going to be hard to jump right back into competition anytime soon after that. With the NCAA making the decision that they made, I don’t see them reeling that back in. I think the SEC will likely follow some of that lead, here, in short order.”

The NCAA has laid out a partial plan as to how they can grant athletes who play spring sports an extra year of eligibility. However, they haven’t specifically laid out how that’ll work in regard to scholarship limits and other technicalities.

For now, those are future issues.

Currently, Ole Miss anticipates having to continue housing only 10 or less athletes on campus during this time. For those athletes, there will be dining hall options and on-campus resources laid out. Other athletes who live off campus may also come back to Oxford; however, they are advising the student-athletes who can stay home with their families to do so.

“We’re going to treat them as if they were on our campus. If they get sick and need to go to the doctor, they can work through us and we’ll help them get that paid for. We’re going to do everything we can medically and from a mental health perspective,” Carter said. “There’s some students that are very upset right now with the fact that they can’t play and can’t compete and they may need to talk to somebody about that. We’ll have those resources for them.”

Will the SEC actually return to play at any time in the future? Will that April 15 date hold true or be pushed back? What long-term financial implications will decisions that have been made and others that may come have on the University?

There are a lot of unanswered questions right now.

“It’s fluid, as you know. We’re trying to plan as far ahead as we can but we really can only deal with the information that we have,” Carter said. “There’s no manual for this situation. It’s unprecedented. I think for us we have to do the best we can with the information we have and try to be forward thinking as much as we can.”

MHSAA suspends all competition and practices for high school…