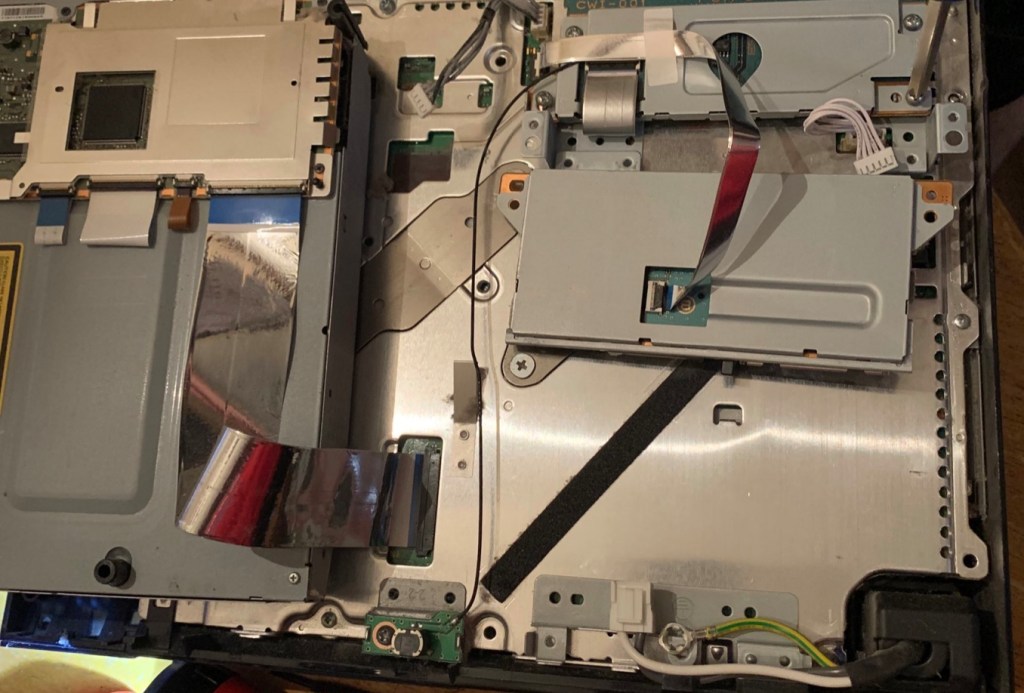 The cleaned out interior of a 2008 Playstation 2. (Nathanael Gabler)

I miss routine. I don’t necessarily need an office; this job can be, and is often done, from anywhere. But before the coronavirus outbreak, I would go to the office anyways, just about every day. The freedom of writing this story from my kitchen table with some Garth Brooks on the speaker instead of headphones is nice, but the routine change is just an adjustment.

I miss three baseball games a weekend. I miss having actual sports in my life. But right now on a Thursday morning, I miss writing my standard Friday Bases Loaded story, outlining the four things to watch for as the Ole Miss baseball weekend approaches.

So, I’m going to rebrand the story: welcome to the Coronavirus Chronicles. We don’t have baseball, but I miss the Thursday morning routine and honestly I miss positivity in the world. So, instead of writing four baseball topics for every Friday, I’m going to be proposing four things a week for some positivity: a book suggestion, a podcast suggestion, an off-the-wall music suggestion and a weird story about how I’ve been killing time in the days of coronavirus.

I’m a sportswriter, and this is in all essence a column in the sports section of a newspaper, so we’re going to try and keep things sports-related in general. However, I don’t really like being bound by rules – even ones I create for myself ­– unless there’s a good reason for them. So there will certainly be deviations from sports, as there is with my first book suggestion of the quarantine.

Malcolm Gladwell’s sixth book presents one simple question and attempts to answer it in 388 pages: why do our interactions with total strangers often go so wrong?

If you’ve ever read Gladwell before, his most widely popular book is Outliers, he essentially writes as a sociological, intellectual deep dive into obscure questions he poses to himself. To not spoil much, the book opens talking about Spanish explorer Hernán Cortés and his interactions with Moctezuma II upon his arrival in Mexico during the early 16th-century.

Obviously, Cortés and Moctezuma don’t speak the same language, and there is no one capable of translation. Due to a series of cultural differences, Cortés believed the Aztecs were treating him like a god of sorts while Moctezuma was growing increasingly frustrated with the Spanish presence. These miscommunications would lead to Moctezuma II’s death and the eventual fall of the Aztec Empire.

Through stories like this one, as well as breaking down how Fidel Castro continuously fooled the CIA and why the United Kingdom’s Neville Chamberlain trusted Adolf Hitler, Gladwell tries to answer the question of why we so poorly interpret our interactions with strangers.

NFL football is about the only thing in the sports world happening right now, and the Ringer’s Kevin Clark and Robert Mays break it down better than anyone out there. These two focus more on the team-building aspect of the league rather than actual gameplay, making their analysis fantastic for these offseason and free-agency times in the NFL. If you want to get smarter about football, it’s my number one recommendation.

For those who follow me on Twitter, you know I’m a big Taylor Swift fan. But there’s no need to recommend to people Taylor Swift or Pearl Jam or The Rolling Stones or Oasis, so we’re going to venture more obscure with these recommendations (hopefully). I love a good folk band, so I’ll try to mix it up, but folk and Americana is where I lean most of the time.

I saw the Lone Bellow for the first time in 2015 in a small, 100 person venue in Nashville. I had never heard them before and had no idea who they were, but the harmony just grasped me and they’ve been arguably my favorite artist ever since. The band is just three members, hailing from Brooklyn in a sort of mix between Americana and alternative-country. I’m a sucker for a good, blues-y harmony, and if that’s something that appeals to you, go all the way back to their first, self-titled album and listen to Green Eyes and a Heart of Gold.

Still wondering how the Conference USA talk to open this story came from?

Dating back to this past summer, a friend and I would simulate seasons of NCAA Football 2008 on the Playstation 2. Now, there are more recent versions of the game, but it hasn’t been made since 2014 due to licensing issues with the NCAA. Essentially, we’d start with a lower-level FCS program as coaches and over the course of a 60-year career build programs, recruit and move up to the ranks until you’re at a program capable of winning it all. Whoever won the most national championships in the 60-year stretch wins.

It’s a simulation that takes months. We don’t play any of the games, making it more challenging but allowing you to go through an entire season in about 90 minutes. Busy with work and “having lives and friends and stuff,” we hadn’t turned on the PS2 in months. When coronavirus and self-quarantining hit, we fired it up again.

But it wouldn’t work. The 12-or-more-year-old system wouldn’t turn on. It had been through four or five moves throughout the southeast and seen better days. It wasn’t a surprise that it had bit the dust considering they’ve reassessed two subsequent versions of the PlayStation and are launching another soon, but we wanted to try and fix this. So we hit YouTube.

We thought if we could take it apart and clean all the dust out, maybe it would work again – but neither of us were exactly manufacturing or engineering-gifted humans. We don’t build things with our hands, but we tried. Screw-by-screw, accidentally ripping off the occasional plastic barrier or lever (that thankfully weren’t necessary), we got to the inside of this old deformity of a video game system.

Cleaning it of dust consisted more of blowing dust onto the floor and accidentally into my face – yes, I’m sure this is great in the COVID-19 era – we eventually stripped it down and cleaned it. There were a few parts that looked kind of important that accidentally got disconnected, resulting in a “Let’s try this” attitude. There was no way this was going to work.

We had to tape some pieces back together. Blue strips of electrical tape now hold the plastic, protective pieces that we accidentally ripped off into place, but somehow we have a working PlayStation 2. And then I won back-to-back-to-back CUSA championships at Louisiana Tech.

This whole story is to say this – do something stupid, do something that you thought was fun 12 years ago. It may still be fun now. It’s dark times, it’s gloomy times in our country and the world. However, there’s always a little light out there – you just have to find it.

Oxford baseball seniors reflect on what could have been…