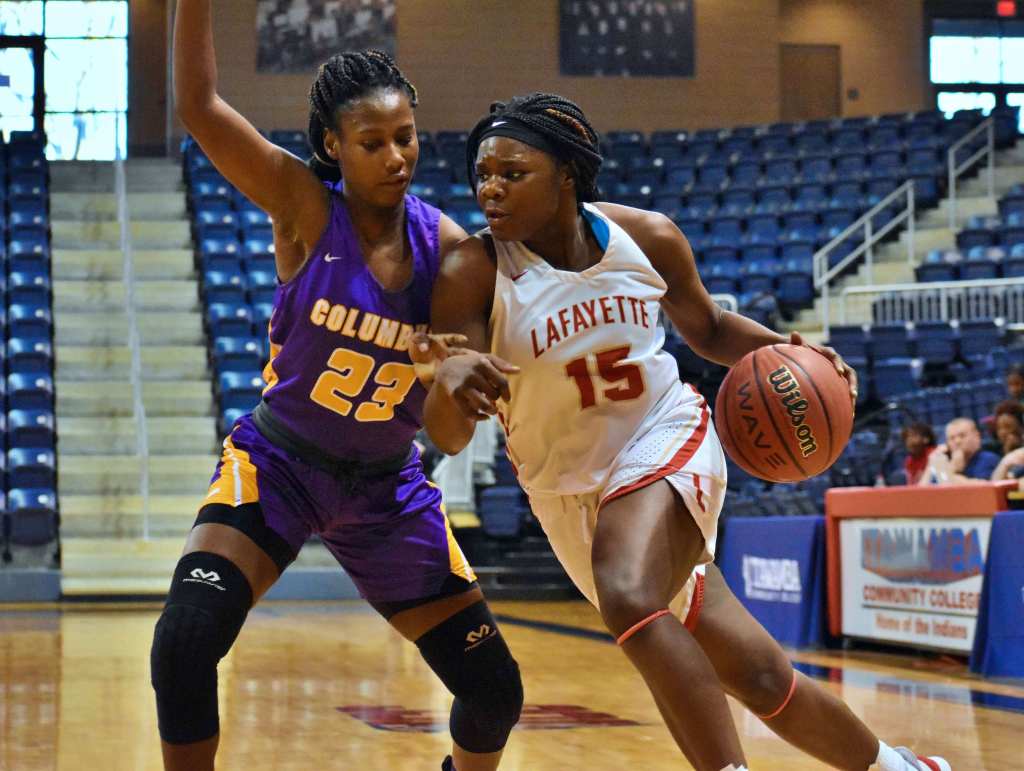 Kimaya Dixon won a Mississippi state championship as a freshman. She led the Lafayette team in scoring as a sophomore. As a junior, she upped both her scoring and rebounding numbers, helping lead the Lady Commodores to a 27-4 record. Now, at the conclusion of her senior year, Dixon is the 2020 EAGLE Girls All-Area Player of the Year.

Dixon’s senior year was impressive. The Lady Commodores’ leading scorer raised the bar on her scoring again as a senior, as she did every single year of her career. She finished her final campaign averaging 16.5 points, 6.3 rebounds, 1.6 assists and 3.0 steals per game.

As good as Dixon was all year, she was even better when it mattered. Down the playoff stretch, in the team’s last three games of the year, Dixon went for 24, 20 and 17 points.

“I don’t expect anything less from her,” Lafayette coach Shayne Linzy said, laughing when talking about his seniors’ final games. “Those seniors understood that they had to make the plays. Whether it was scoring, rebounding, making the right pass, our seniors understood they needed to do those things. Kimaya, God bless her, she was exhausted every night. She had to play physically down low and guard post players, then we were relying on her to do everything else on the offensive end. She really went above and beyond of what I was asking of her, and I was asking a lot.”

Linzy’s always been Dixon’s coach at Lafayette. After her ninth grade year, when the Lady Commodores won 30 games and the MHSAA 4A State Title, Linzy said he had a prediction for the young, rising sophomore: she was going to lead the team in scoring as a sophomore.

After playing sparingly as a freshman, Dixon changed position as a sophomore and everything changed.

“My freshman year, I was surrounded by good players, great players. Shaniyah Buford, Orianna Shaw and Mariah Holland. It was their team,” Buford said. “But then coach came to me and told me that we needed someone to step up and score. I didn’t believe him. But the floor was more open, and no one really knew about me. Everyone knew Azariah (Buford) and Mariah and the other girls, but they didn’t know about me.”

Dixon has always been able to score, but where her coach said he saw the most improvement going into this season, her last, was in the leadership department. Linzy said Dixon really blossomed into a vocal leader as a senior, something that was not necessarily her strong suit before. She became one of the loudest voices in the gym during practice. During games, she would regularly pull aside younger girls on the team. Be it a pep talk or instruction, Dixon grew into a coach on the court.

“It wasn’t really even something I tried to do; it just happened,” Dixon said. “Usually, I was just telling them that mistakes will be made, that’s okay. We can’t afford to let it get us down. In a game, if you turn the ball over you can’t just mope around – you have to get back on defense. That was most of it.”

This season, things were a little different for the Commodores. The team lost their only true post player to a season-ending injury in the fall, before the season even started. This shifted Dixon and fellow senior Azariah Buford, who will appear later on this list, to more of post roles.

Neither were really true post players, Dixon is more of a slashing wing, but she tackled the challenge of guarding bigger girls every night. And it never really slowed down her offense.

“Kimaya, she’s so versatile. She can score literally anywhere on the floor. She can post you up down low because she’s strong enough and fast enough to get around you. She’s capable of handling the ball and running point if you need and she’s gotten better at shooting the three. Watching her progress as a complete, all-around player has been really fun. She really came on strong for us this year and did a lot of great things for us.”

The second Commodore senior on our All-Area team truly came out of nowhere. Molly Jones played junior varsity ball as a freshman and a sophomore. She played varsity as a junior, but in a much smaller role. As a senior, she was undoubtedly the third-best player on a Lady Commodores team that reached the MHSAA 5A Quarterfinals, averaging 9.1 points per game in the process.

“Honestly, when I put her into the lineup, I wasn’t sure. But she proved me wrong,” Linzy said. “She did a fantastic job this year and I couldn’t have been more excited to see that. Ninth and 10th grade year, she’s just a young girl out there having fun. She wasn’t too serious about it, but at some point before her junior year, that changed. Molly was excellent defensively this year and played out of her shoes on offense. Who saw that coming? I certainly didn’t.”

Oxford has an incredibly young, and very exciting backcourt for the future of Lady Charger basketball. Howell, a sophomore, was almost the veteran of the duo. Coming off a freshman year where she rarely played, averaging 1.9 points per game, Howell jumped to 10.3 points, 6.8 rebounds and a starting role with Oxford. She finished the year as the team’s second-leading scorer.

“I could tell she took this summer differently. She played a bit as a freshman, but she knew she’d have a good chance to play a lot as a sophomore,” Oxford coach Cliff Ormon said. “There were some up and down games, up and down moments when we wish she would’ve done more and she knew she could’ve done more. But she was always a threat to score, and the way she played both inside and outside put a threat on the other teams.”

Where Dixon had to take on a new role this season in the post, the shift was even more significant for Azariah Buford. The EAGLE’s 2019 Player of the Year went from point guard to the five, often defending the opposition’s tallest player. Offensively, she was an unbelievable mismatch against a bigger girl. Defensively, she battled. Buford finished her Lafayette career averaging 13.5 points, 6.3 rebounds and 5.1 steals per game as a senior. Buford ended her high school career with 1,444 points, and she’ll be playing at Jones College next season.

“She really embraced it. I knew it wasn’t really what she wanted to do, but she knew we were in a bind and she never questioned it. … She just wanted to play. That meant she would have to guard some girls that were over six-feet, and if she complained about it, she never did so to me. A lot of our girls, they’ve never shied away from playing multiple positions. And that showed the other girls to accept it as well. Hell, the coach moved their point guard to a post position and she responded.”

Standing 6-foot-1, Caliya Toles has always acted as a defensive force for Oxford. As a senior, she stepped up her rebounding and scoring to turn into a true, two-way threat for the Chargers. Averaging 8.5 points, 11.1 rebounds and 4.3 blocks as a senior, Toles rode her big senior year into a college offer from Itawamba Community College, where she’ll be playing ball next season.

“She came in with a purpose to her senior year. She knew she might have a possibility to play college ball after this and knew what she had to do to prove herself, and I think that showed,” Ormon said. “Caliya has always been a huge defensive presence for us, even as a freshman. But this year, she really decided to be more dominant on the boards and had some games scoring wise where she took over inside. Every game, we knew what she’d bring defensively. But when she was on offensively, out team peaked.”

The first girl off the bench for the All-Area Team is by far the youngest. Just a freshman, Audria Houston led the Chargers with 10.6 points per game, adding 4.0 rebounds and 1.4 assists. Houston didn’t play varsity ball a year ago, then she scored 298 points as a freshman.

“It’s been a long time since I had a freshman lead us in scoring. I’d have to go back 12 years,” Ormon said. “She has a really bright future for us. The way she finished the year is what impressed me, playing great against Hernando there at the end. It’s tough now with everything in the world, but that’s what’s tough with Audria. This offseason is going to be so key with them, as young players but good players for us. We’re definitely excited about what we bring back.”