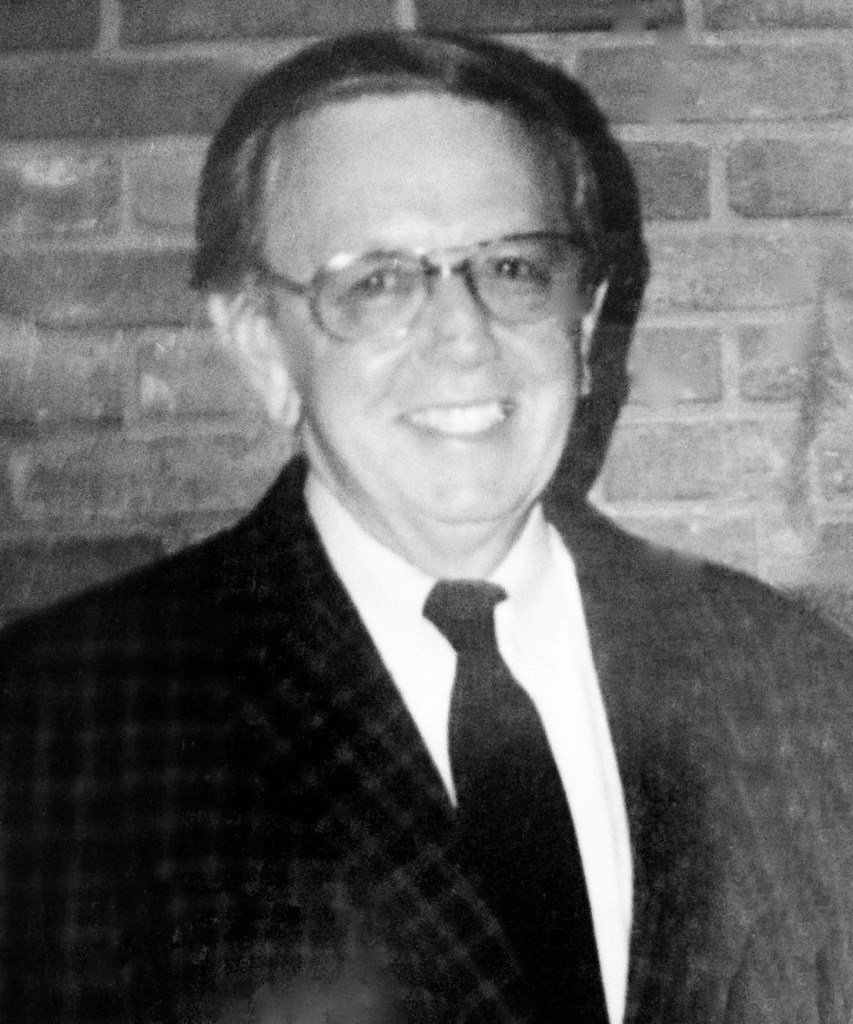 Robert Harvey Smith joined his Lord and Savior on  Thursday, May 14, 2020, while surrounded by family in the home of his daughter, Stacie Smith Crim. Originally from Elizabethton, Tenn., Bob, also lovingly known as “Bob Bob” to his grandchildren, will be remembered for his steadfast faith in Christ, his love for people, his wit and wisdom, and his service to our country during World War II. To know him was to understand why his was called the Greatest Generation.

After the war, Mr. Smith spent most of his life in Greenwood, Miss., where he moved in 1954 with his bride, Rachel Joan McGee, and their infant son, Brent. The two had met in Memphis, Tenn., not long after Bob began working for McKesson Robbins Drug Company. During his forty-five-year tenure, Mr. Smith was a standout salesman. He was only the third person to represent McKesson in the Mississippi Delta since the company established the territory in 1879. Despite his young age, he formed such a strong customer base that he would go on to be named the nation’s number one wholesale salesman twice in his career. His success is a reflection of the profound relationships he cultivated with all. Of course, if you asked Mr. Smith, he gave all the credit to his devoted wife, Joan, and to “the finest group of customers in the world”. He was beloved not only by his coworkers, but also by the many grateful store owners for whom he would go to the ends of the earth.

After his retirement in 1990, rather than adopting the comfortable life of a retiree, he devoted his energy to First United Methodist Church where he was a member since 1954. He served in many capacities, including as chairman of the administrative board for ten years and as finance chairman for fourteen. He likewise enjoyed helping his son and daughter-in-law, Brent and Laura Smith, at their own pharmacy in Oxford, Miss. Chaney’s Pharmacy benefitted from both Bob’s wisdom and ebullient spirit, as did we all.

Mr. Smith was born in 1925, to William and Opal Smith in Elizabethton. He joyfully celebrated his ninety-fifth birthday surrounded by his children on May 2. He was a member of the 1938 Elizabethton High School football team, who went on to win the school’s only state championship and to be inducted into the Hall of Fame. At the young age of eighteen, he departed East Tennessee after being drafted to aid in America’s fight in the Second World War. As part of the 42nd Infantry Division—known as the “Rainbow Division”—of the 232nd Infantry Regiment, Company K, he rose to the rank of technical sergeant. The Rainbow Division landed in Marseille, France in December of 1944 and served six months as part of a task force under General George Patton. Afterward they marched into Germany, where Sergeant Smith earned the Bronze Star for his action in the Battle of Wurzburg. He continued on with the Rainbow Division to liberate Dachau, the first concentration camp established by the Third Reich.

Mr. Smith was preceded in death by his wife of sixty-five years, Joan McGee Smith; his son, David Barton Smith; his parents; and his sister, Geraldine Smith Peters. He is survived by his son, Robert Brent Smith, and his wife, Laura, of Oxford; his daughter, Stacie Smith Crim, and her husband, Bill, of Jackson, Miss.; his five grandchildren, David Barton Smith, II, and his wife, Leslie, of Oxford, Aynslee Alexander Smith, of Oxford, William Lee Crim, III, and his wife, Kelly, of Hattiesburg, Miss., Dr. Rachel Barton Crim, of Charlottesville, Va., and Robert Balie Crim, of Oxford; his great-grandson, Barton Brent Smith, of Oxford; his sister, Christine Smith Eller, of Elizabethton; his brother-in-law, Dale Gassaway McGee, and his wife, Jan, of Memphis, Tenn.; his two nieces, Teresa Peters Broome, and her husband, Rick, of Elizabethton, and Sharon Peters Purdy, of Arlington, Texas; his nephews, Lyle Vinson McGee, of Monroe, La., and Michael Wade McGee, of Atlanta, Ga.; and several great nieces and nephews.

The family would like to thank his devoted caregiver, Norma Firrow, and her daughter Jessica. A special thank you to his loving and attentive physicians, Dr. Harper Stone, Dr. Albert Steele, Dr. John D. Adams, Dr. Jimmy Jones, and Dr. Kenneth Hines.