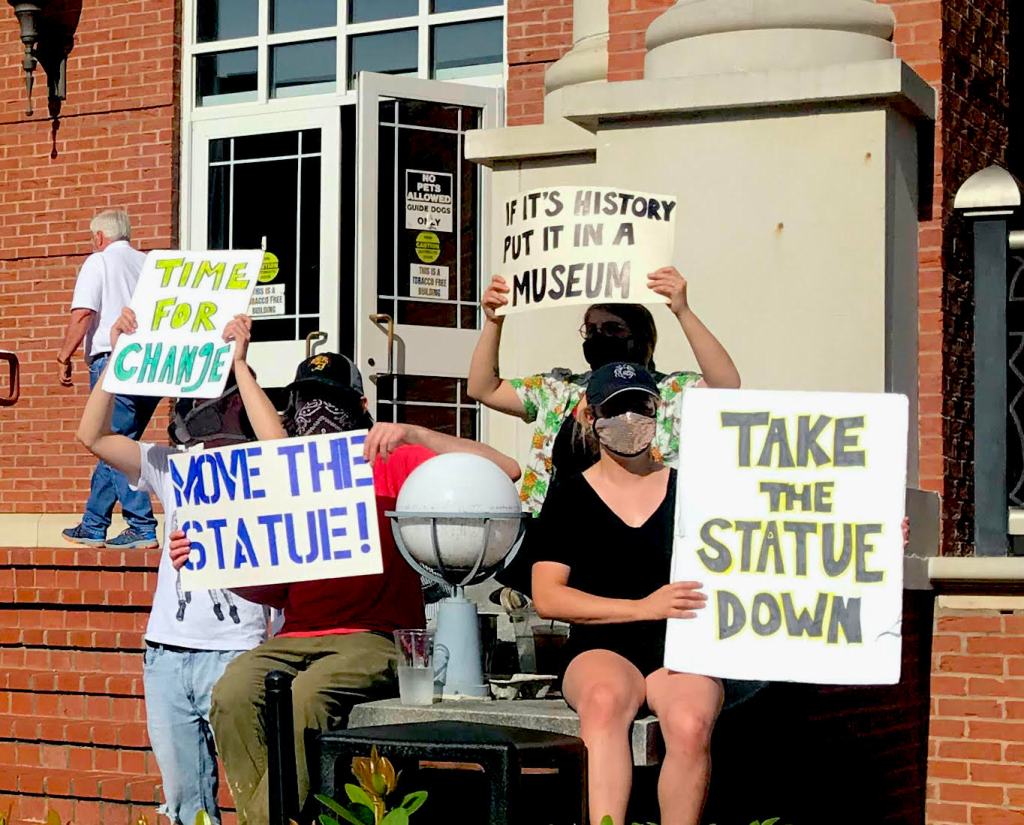 The Lafayette County Board of Supervisors met at 5 p.m. Monday to discuss moving the statue from its place on the Courthouse lawn.

Residents of Lafayette County gathered inside the Chancery building to discuss the topic of the Confederate monument, and if it should be removed from the courthouse lawn.

“We’re going to respect each other here today,” Board President Mike Roberts said in his opening address to attendees. “We’re not going to be bitter and petty. If you are, it’s not going to be a chance to defend it and explain yourself. We’re going to ask the sheriff to have you removed.”

Dr. Don Cole, a retired University of Mississippi professor and civil rights activist, spoke in favor of taking the statue down.

“I am one who is personally offended by the presence of the Confederate statue,” Cole said. “It does not represent my heritage or the heritage of anyone who looks like me.”

Cole, who is Black, was one of eight UM students to be expelled for protesting against administrative injustices in 1970. He later returned to Oxford and spent 25 years in the UM mathematics department.

The Rev. Eddie Rester, pastor at Oxford-University United Methodist Church, was another member of the group in support of taking down the statue. Rester reflected on a friend, Marcus, whom he met at a leadership gathering while he was in college.

“Our conversations were uncomfortable, but some of the most important of my life,” Rester said. “He was recruited to play basketball at Ole Miss. But chose Moorehouse college instead. ‘Why would he choose Moorehouse over an SEC school?’ I asked. ‘Because I decided I wouldn’t play under that flag’ was his answer.”

Rester went on to say that during those conversations, he didn’t just hear his friend’s opposition to the flag.

“I heard his pain and I heard his anguish,” Rester said. “I did not know before I met Marcus that the symbols of the Confederacy could have a vastly different meaning than what I knew.”

Mark Bowles, who is the president of Denmark Water Association in Lafayette County, was one of the attendees in favor of keeping the statue in its current location.

“I can remember the days when we had a shoe shop here in Oxford and a black guy ran that shop,” Bowles said. “He got the same last name as I do. He said he could go to Chicago and he could be a poor white man or he could stay right here in Oxford and be a rich black man. That statue had no effect on him.”

The last person to speak in favor of keeping the statue was Johnny Morgan, president of Morgan-White Group in Oxford and host of the “Good Ole Boys and Gals” political event.

Morgan spoke about how, when he went to Oxford High School, he was taught that the Civil War was not fought over slavery or racism. Instead, he said the war was fought over unfair taxation on cotton.

“The problem here today is, this is not about slavery,” Morgan said. “This ain’t about racism. This is totally different. Out there right now is nothing but a demonstration and an extension of the radical left-wing movement going on in the United States today.”

The Board of Supervisors will meet again on July 6, to vote on the next steps regarding the Confederate statue.