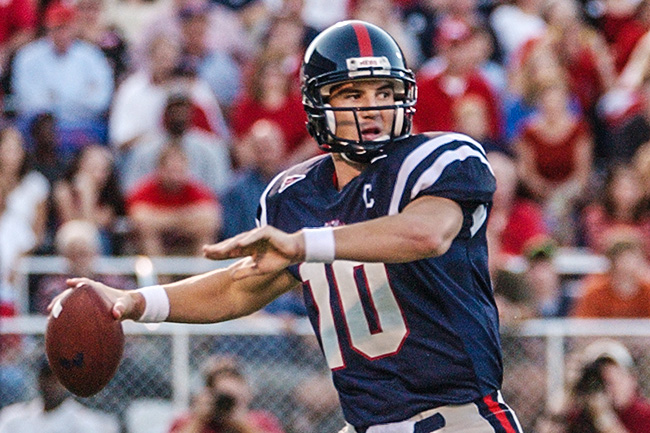 Eli Manning will have his No. 10 jersey number retired during the 2020 season, Ole Miss announced on Monday. Manning joins his father, Archie Manning, and Chucky Mullins as the only football players to have their number retired. (Bruce Newman)

Eli Manning will be joining his father and Chucky Mullins in elite company this fall.

Ole Miss announced on Monday that Manning will have his No. 10 jersey number retired during the 2020 football season. The ceremony is expected to take place during the Auburn game on Sept. 19.

“We couldn’t be prouder or more excited to officially add Eli’s No. 10 to its rightful place among the retired jersey numbers in our football history,” Carter said. “Like Chucky and Archie, Eli left an indelible impact on our program and the game of football as a whole. His dedication, humility and kindness over the course of his career epitomizes what it means to be a Rebel, and we look forward to celebrating him as a player and a person.”

Manning was a four-year letterwinner for the Rebels from 2000 to 2003. During his time in a Rebel uniform, Manning set or tied 47 Ole Miss single-game, season and career records. In 2003, Manning won the Maxwell Award, which goes to the nation’s most outstanding college football player, and was finished third in the Heisman Trophy voting.

Once his career at Ole Miss was complete, Manning finished with 10,119 career passing yards and 81 career touchdown passes. He also set a new Ole Miss career record for completions with, 829, and passing attempts (1,363). Both numbers ranked fourth on the SEC career lists.

“I owe so much credit to the coaches and all the wonderful teammates that I had here during my time in Oxford that put in all the hard work right alongside of me,” Manning said. “It’ll be special to see the numbers go up there next to my dad and Chucky Mullins.”

Manning was the No. 1 draft pick of the 2004 draft by the San Diego Chargers, but was traded to the New York Giants for Phillip Rivers. He played for the Giants for 16 years before retiring after the 2019 season. In those 16 years, he won two Super Bowl championships and was named a two-time Super Bowl Most Valuable Player. Manning recently received the 2020 Bart Starr Award, which is given annually to an NFL player who best exemplifies outstanding character and leadership in the home, on the field and in the community.

Ole Miss quarterback John Rhys Plumlee and linebacker Jacquez Jones were currently wearing No. 10. Plumlee is allowed to finish out his Rebel career with No. 10 if he so chooses while Jones already swapped to No. 32 during the offseason, an Ole Miss spokesperson told the EAGLE.

NCAA: No championship events in states where Confederate symbol…