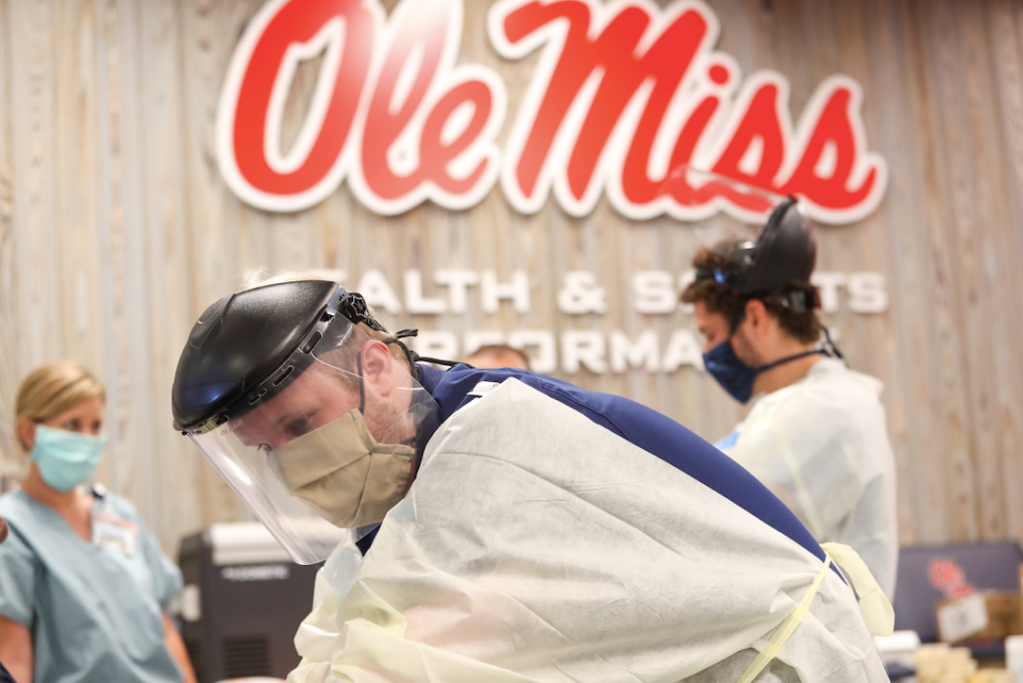 Ole Miss football student-athletes were screened and tested for COVID-19 upon their return to The Manning Center on the Ole Miss campus on June 1st, 2020. The SEC announced their COVID-19 protocols last Friday for their fall sports, including football. (Joshua McCoy/Ole Miss Athletics.)

In an email sent out to the campus community, the school reported 14 new positive tests with 13 of them being student-athletes and one employee. 11 of the 13 are from the same team, according to the University’s release, but did not specify which teams were affected.

A source with knowledge of the situation told the EAGLE the 11 positives did not come from the football team.

The number is considered an outbreak by the Mississippi State Department of Health, which would be the first outbreak of cases since student-athletes began reporting back to campus in June.

The individuals who tested positive were part of a mass screening conducted earlier this week of student-athletes returning to campus. They were asked to quarantine until the results came back.

Two more positive results came back from pending student-athlete tests, bringing the total to 15. The two new cases were separate from the 11 reported on the same team earlier in the day.

“The 13 positive cases reported today were discovered in a mass screening of 274 individuals that are associated with Athletics, and privacy concerns prevent us from being able to provide any details on their role in our department,” said Ole Miss athletics director Keith Carter in a statement. “We will use this as a teaching moment to reinforce responsible social behavior with all those affiliated with our athletics program and our campus community.”

On Monday during a press conference following the start of fall camp, football head coach Lane Kiffin would not speak on if any players were in quarantine for testing positive or due to contact tracing.

Kiffin was also asked if there was a certain number of positive cases that would trigger the program to suspend fall camp.

“We lean on our medical staff on that,” Kiffin said. “We have not set an exact number. We like where we’re at. We’ll just go day-by-day. If it got to the point where we need to talk about shutting down, we’ll talk about it. But we’re moving forward. I just really listen. That’s not my expertise.”