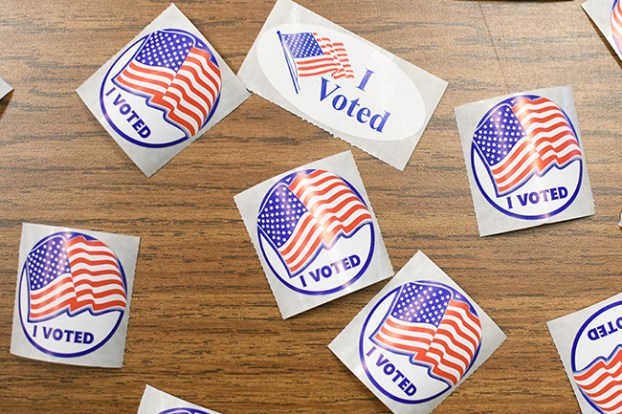 "I Voted" stickers are on a table. (Bruce Newman, Oxford Eagle via AP)

Monday brought the beginning of absentee voting in Mississippi amid a pandemic.

With COVID-19 still prominent in Mississippi, and the world, election officials are having to adapt and absentee voting will not be drastically changed due to a ruling made last week.

On Friday, the Mississippi Supreme court ruled state law does not allow absentee voting by all people with health conditions that may make them vulnerable to COVID-19.

A majority of justices reversed a Sept. 2 decision by Hinds County Chancery Judge Denise Owens, saying she too broadly interpreted some changes that legislators made to state law this year.

“Having a preexisting condition that puts a voter at a higher risk does not automatically create a temporary disability for absentee-voting purposes,” justices wrote.

Mississippi law does not allow for widespread early voting, but voters 65 or older are permitted to vote absentee, as well as voters of any age who are permanently disabled or will be out of their home county on Election Day.

With that in mind, the Lafayette County Courthouse had a line of early voters waiting to exercise their right to vote.

“We encourage people to come in the next 45 days to absentee (vote), especially if you’re over 65,” said Lafayette County Circuit Clerk Jeff Busby. “Obviously, we want you to come if you’re going to be out of town (on Nov. 3), because we want you to be able to vote. If you’re over 65 years of age, come, please. Don’t stand in line and don’t wait to stand in line at the precincts on Nov. 3, because there will be long lines.”

This year’s election cycle includes possibly the fiercest presidential election in recent memory. President Donald Trump is facing Democratic Party nominee, and former Vice President, Joe Biden as well as seven other candidates who qualified for Mississippi’s ballot. One of those seven is indeed music artist Kanye West, who is running as an Independent with Michelle Tidball as his Vice President candidate.

Senator Cindy Hyde-Smith is running for re-election to continue to represent Mississippi in the United States Senate against Democratic candidate Mike Espy in a rematch from two years ago. Libertarian candidate Jimmy L. Edwards is also running for Hyde-Smith’s Senate seat.

In a more regionally-focused race, U.S. Representative Trent Kelly is running for re-election in the 1st Congressional District race against Democratic candidate, and University of Mississippi law professor, Antonia Eliason.

“Because of COVID and (being) six-feet apart, you have a double whammy there,” Busby said. “You have a huge election with your President, Senate (and) House. But you also have the factor of social distancing.”

Having as many eligible voters as possible take advantage of absentee voting before the Oct. 31 deadline could possibly alleviate some crowding issues or building up of long lines come November.

Another factor that will limit the amount of surfaces touched by multiple people at voting precincts is Lafayette’ County’s shift away from electronic voting machines back to paper ballots.

The shift from using electronic voting machines will help speed up the time it takes for someone to vote with eliminating the need of the machines to be disinfected and cleaned after each use.

Mississippi Critterz will continue to operate the animal shelter for at least another year. The Oxford Board of Aldermen voted... read more