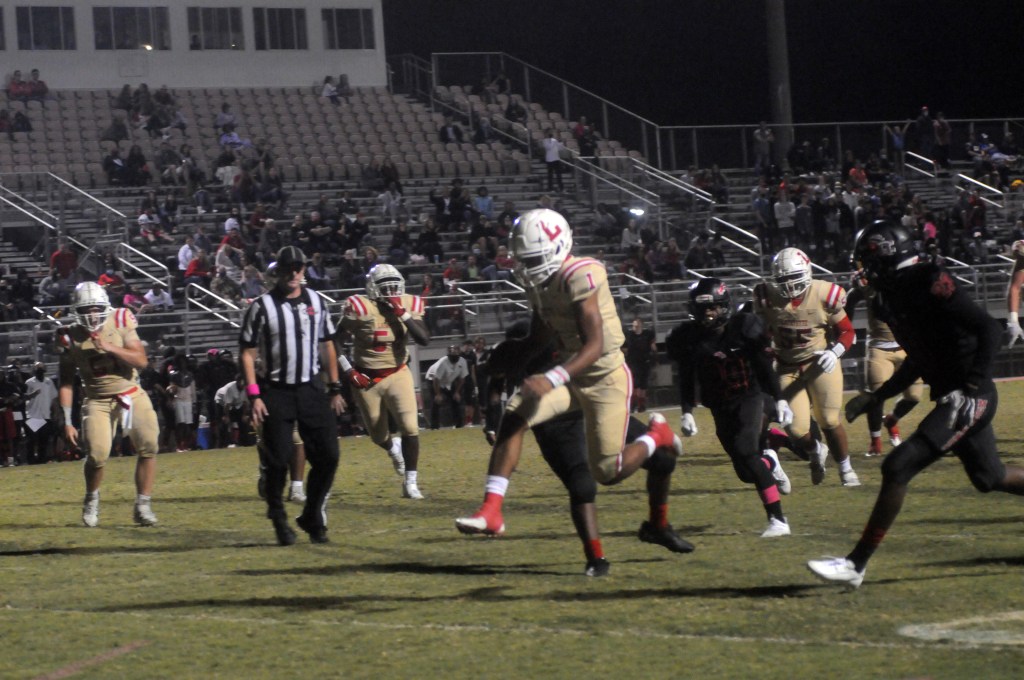 OLIVE BRANCH —  When preparing for Center Hill and its triple-option offense it is a challenge for teams during a normal week, but for Lafayette it was anything but normal.

With the threat of Hurricane Delta impacting Mississippi on Friday, most high school football games were moved to Thursday. That gave Commodore head coach Michael Fair and his staff one less day to prepare, and more reasons for them to lose sleep all week.

The game went as expected with Lafayette and Center Hill entrenched on what Fair said felt like a boxing match, but in the end the Commodores pulled away late thanks to their play makers for the 21-6 win at Center Hill High School.

“We give up six points and I feel like I just went through a 15-round knockout fight with these guys,” Fair said. “(Center Hill) is so good at what they do and they stress you on so many levels. The thing that they’re adding to it is a really good defense. They had a really good plan for us and flew to the ball. We just didn’t execute at times, but we do when it matters most and I’m proud of my young team for that.”

The Commodores (4-2, 2-1 1-5A) finally put Center Hill on the ropes in the final five minutes of the game. Following one of the Mustangs’ (4-2, 2-1) turnovers, running back Jay Reed gave Lafayette some breathing room with a 27-yard touchdown run. On the very next drive, the Mustangs fumbled the ball away again and Commodore quarterback Tyrus Carmichael-Williams made them pay with a score on the keeper for the dagger.

“We had a couple drops, a couple picks and he makes what I think is the game-sealing play at the end,” Fair said. “It’s kind of on a busted play. That’s what he can do. Each week I see something else that he can offer for this offense and it’s our job to get him in position to be successful. He’s doing a good job.”

Reed continued to become the Commodores’ main threat on the ground, rushing for 76 yards and a touchdown on 17 carries.

The early stages of the game was a feeling out process for both teams, relying on their strengths and trying to gain the first advantage in the run game.

After a failed fourth down conversion and a missed field goal by Andrew Pugh during their first two possessions, Lafayette took to the air when Williams found Brendan Toles for the 43-yard touchdown strike and the 7-0 lead in the second quarter.

The Mississippi State commit continued to provide the spark for the Commodores with an interception in the third quarter to kill a Mustangs’ drive in a one-point game.

“He’s as good as advertised,” Fair said of Toles. “He’s probably the fastest player I ever coached and he showed some of that tonight. We started to play him on offense a couple weeks ago and you’ve always got to know where he is. He’s a threat and very proud of his effort, for sure.”

Since entering Class 5A in 2017, Lafayette has been one of the few defenses to figure how to solve the Mustangs offense with a 4-0 record against them.

The Mustangs were averaging 37.5 points per game before the Commodores held them to two fields goals on Thursday. Center Hill had three turnovers and a turnover on downs.

“I’m not the only one that didn’t sleep this week, I can promise you,” Fair said. “Coach McCory, Coach Ashley and Coach Norris, those guys had our defense ready to go tonight. To only give up two field goals to a team like this, we’re very, very fortunate. I couldn’t be more proud of our players and our coaches.”

Lafayette stays on the road next week and travels to Saltillo on Friday.