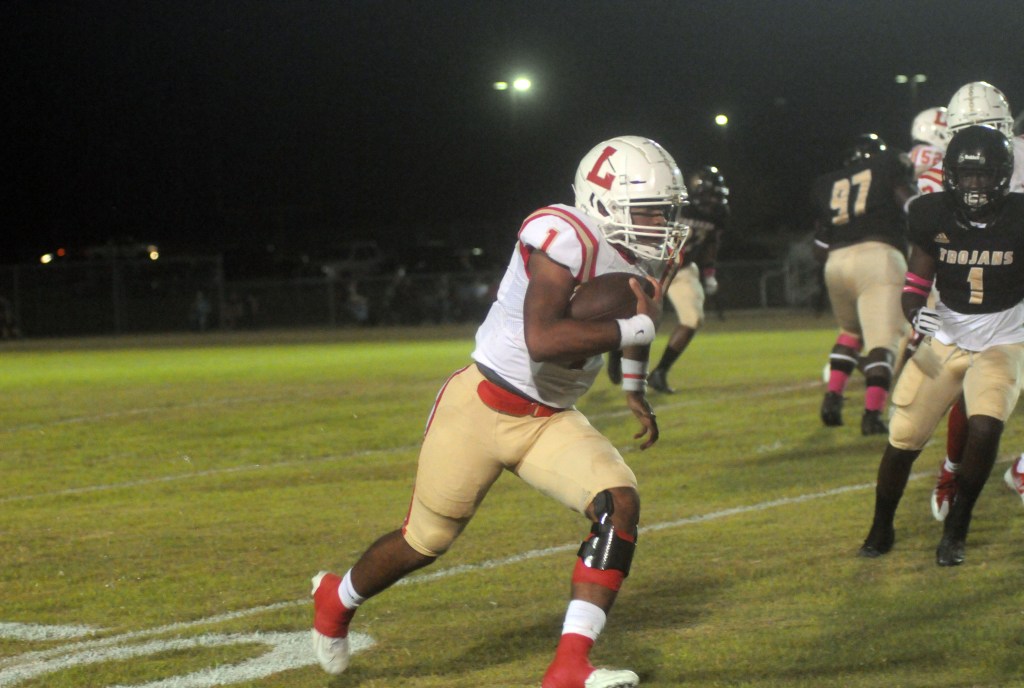 Lafayette's Tyrus Carmichael-Williams (1) scores a touchdown on a 51-yard run against New Hope during the first quarter of their game at New Hope High School in Columbus on Friday, October 23, 2020. The Commodores won 57-20 (Jake Thompson/Oxford Eagle)

COLUMBUS — Lafayette is one step closer to achieving something they have not yet accomplished since moving up to Class 5A.

The Commodores seemingly secured their place in next month’s playoffs, but with Friday’s 51-20 win over New Hope, they have positioned themselves for a chance to win their first Region 1-5A title.

The offense took advantage of short fields and quarterback Tyrus Carmichael-Williams’ legs to jump out to a 28-7 lead at halftime. Lafayette (6-2, 4-1 1-5A) never looked back from there.

After a slow start at Saltillo last week, the quick start was a welcomed sight for Commodore head coach Michael Fair.

“Last week brought some attention, offensively, to some deficiencies we had,” Fair said. “We worked all week to get those things ironed out, and I thought we executed at a higher level tonight.”

Williams got the scoring started with a 51-yard run late in the first quarter. He also threw for a touchdown, finding Kylen Vaughn in the corner of the end zone on 4th and Goal from the Trojan’s six-yard line.

Running back Jay Reed also had a pair of rushing touchdowns on the night. Jagger Stovall rushed for a touchdown as did Jeremiah Tanner late in the game.

Backup quarterback Will Dabney played much of the second half and found Benton Linzy for a 34-yard touchdown pass in the fourth quarter.

The Commodore defense picked up where they left off at Saltillo a week ago, holding New Hope (2-6, 1-4) to seven points for the first half. Trojan quarterback Tyquantez Crowell accounted for their first two scores, including a 60-yard run on the first drive of the third quarter.

New Hope had trouble with turnovers, fumbling the ball three times. Ty Woodall was nearby when Crowell fumbled the ball at the Commodore 30, picking it up and returning it for the 70-yard scoop-and-score.

“I think (Crowell) is one of the fastest kids at quarterback we’ve seen all year,” Fair said. “He’s really elusive and gave us a hard time most of the night. So, to rally and hem him up was good.”

Lafayette returns home next Friday for the only the second time this season when they host Columbus.