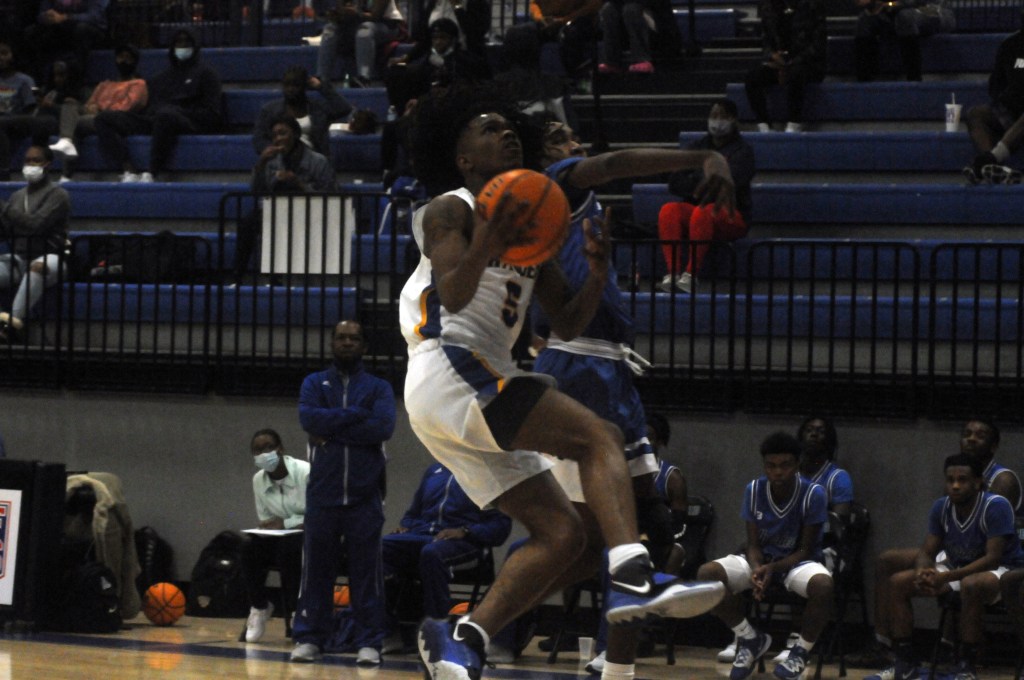 Oxford’s Earl Shaw (5) attempts a layup against an Aberdeen defender during their game at the Oxford High School gym on Tuesday, November 24, 2020. The Chargers won 72-52 to sweep their pair of games in the Oxford Charger Challenge. (Jake Thompson/Oxforde Eagle)

Drew Tyler gives his players a little more freedom during the early portion of the season when it comes to offense, and then slowly begins to reign them in as region play nears in January.

On Tuesday, Chase Rose and Derrius Southern took full advantage in Oxford’s 72-52 win over Aberdeen to close out the annual Oxford Charger Challenge.

Rose and Southern each scored a game-high 19 points to lead the Chargers (4-3), who swept their pair of games in the Charger Challenge with a 67-38 win over Pillow Academy on Monday.

“We want to play high-percentage basketball. In November, I give a green light to most of my players on the offensive end,” said Oxford head coach Drew Tyler. “We learn where our strengths and weaknesses are. But, in mid-December, I reel them in and we play to their individual strengths. From the Lake Cormorant loss, I kind of reeled the team in on some dos and don’ts on the offensive end where the ball needs to be and it actually leads to people scoring in different areas at different times.”

After a back-and-forth first quarter that saw Aberdeen take a two-point lead, the Chargers relied on Rose and Southern to outscore the Bulldogs 22-10 in the second quarter. Rose finished with 15 points in the first half, while Southern chipped in 14.

Oxford kept the pressure on in the second half, outscoring Aberdeen 32-22.

“I think it was a good team win,” Tyler said. “We definitely had more rhyme and reason on the offensive end. Knew where we needed the ball and whose hands it needed to be in as far as perimeter play.”

Oxford girls’ head coach Cliff Ormon is looking for his players to step up and become leaders as the young season moves toward December. On Tuesday, Audria Houston provided that leadership.

Houston scored 10 of Oxford’s last 15 points in the Lady Chargers’ 52-49 win over Aberdeen. It was the lone game for the Oxford girls in this year’s Charger Challenge as Cleveland Central had to cancel their game just hours before they were to tipoff on Monday afternoon due to COVID-19 issues.

“There’s no doubt we’re looking for those people to step up in those moments,” Ormon said. “I have a hard time remembering this is the first time some of these girls are being put in that situation, but as a coach you think that it ought to be easy and we know that it’s not. I thought (Houston) stepped up and made some huge baskets, getting to the rim and to the free throw line.”

Houston finished with a game-high 22 points to lead Oxford (3-5), who won their second straight game, dating back to win over Lake Cormorant on Nov. 19. Keyunna Tellis finished with 11 points while Kaylin Mathis scored eight points.

Aberdeen took a one-point lead into the fourth quarter thanks to the play of Janiyah Haskins, who hit four three-points and finished with 17 points to lead the Bulldogs. Houston and the Chargers would outscore Aberdeen 15-12 in the final quarter to secure the victory.

“We’re kind of playing in spurts and we’ve just got to be able to put together longer spurts,” Ormon said. “I thought for a minute we were going to take over in the fourth (quarter) and got up six or eight, and all of a sudden it’s back to a one-point game with 47 seconds left and I’m racking my brain about how to make sure we get into this and finish. Sometimes players are better than plays and (Houston) stepped up and made a few for us.”

The Lady Chargers will return to the court on Tuesday when they travel to Lewisburg. The boys team is currently without a game on Tuesday after Lewisburg’s boys team had to go into quarantine, but Tyler is looking fill that now-vacant date.