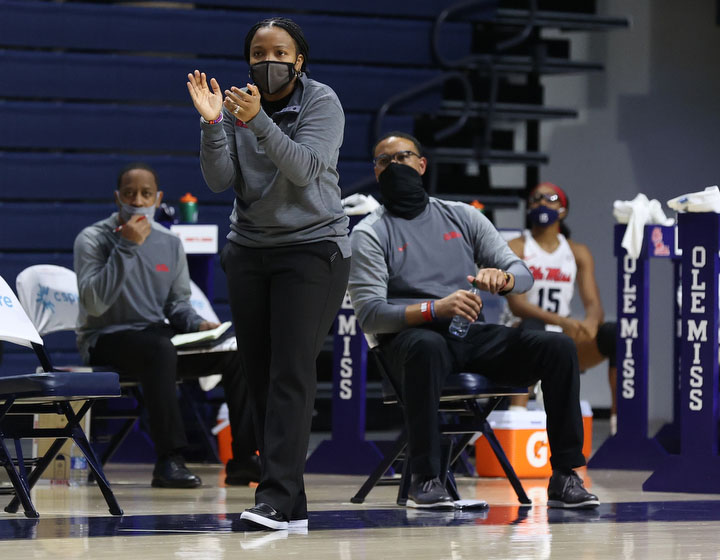 Ole Miss women's basketball head coach Yolett McPhee-McCuin during the Rebels’ game against Kansas on December 3rd, 2020 at The Pavilion. The Rebels SEC opener at South Carolina scheduled for Dec. 31 was postponed on Sunday due to positive COVID-19 cases subsequent quarantining in the Ole Miss program. (Joshua McCoy/Ole Miss Athletics)

The Ole Miss women’s basketball team is taking an extended holiday break due to COVID-19.

The Rebels were scheduled to travel to Columbia, S.C. for their Southeastern Conference opener on Dec. 31 against the No. 5 Gamecocks. Instead, that game was postponed on Sunday due to more positive COVID-19 cases and subsequent quarantining due to contact tracing among the program.

With the New Year’s Eve game a SEC contest, it was not canceled altogether. A make-up date is not known at this time.

Sunday’s announcement marked the second-straight game called off for the Rebels, who are currently 6-0 in head coach Yolett McPhee-McCuin’s third year. They have not played since their 64-34 win at George Mason on Dec. 19 and if Sunday’s home game against LSU is played as scheduled, it will be 15 days since the Rebels played a game.

Ole Miss’s Dec. 21 home game against Jacksonville State was canceled due to the Rebels having positive COVID-19 cases.