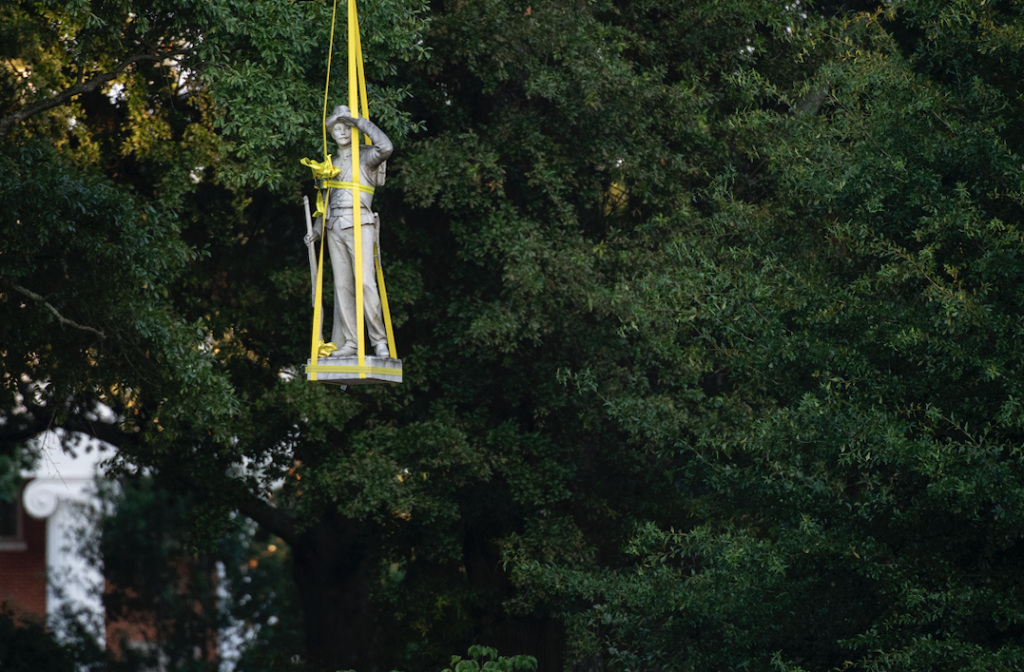 Editor’s Note: This is the third installment of our four-part series, taking a look back at some of the most notable stories of 2020.

The middle portion of 2020 saw much change and progress made in Oxford as decisions were made that many felt would never happen. With the summer winding down, schools began planning for their gradual return to the classroom, albeit with a much different look.

Throughout the year, cities and states in the South and other parts of the country started removing, or relocating, Confederate statues and markers as a way of removing the stains of the Civil War from public view and out of sight from those who felt threatened or hurt by its presence.

The University of Mississippi was one of those places, removing the long-standing Confederate Statue from the entrance of the Lyceum Circle in mid-July. Mississippi’s Institutions of Higher Learning (IHL) gave the final approval needed to relocate the statue to the from the center of campus to behind the C.M. “Tad” Smith Coliseum at the Confederate cemetery.

Initially, the relocation was universally praised by all members of the campus community, but then plans were released regarding the renovation project at the cemetery, including a new pathway and lights. Many felt it was an improvement to the area, bringing reverence to the statue.

Chancellor Glenn Boyce announced some of the project’s plans would not be followed through, minimizing the aesthetics. A temporary screen was built to the east of the statue, blocking it from view of Ole Miss football players who could see it from the practice field and asked to have it covered up in some way.

While the University’s statue was removed from its location, the Confederate statue located by the Lafayette County Courthouse on the Downtown Square was not.

The Lafayette County Board of Supervisors held a public hearing on the matter, allowing both sides to express their viewpoints. Then in early July the Board held a previously unannounced vote during one of their regular meetings, voting unanimously to keep the statue where it resides.

With the Board’s decision came more peaceful protests on the Square and outside of the Lafayette County Chancery Court, where the Board of Supervisors meet. Then, Oxford’s Board of Aldermen entered the discussion by questioning the rightful owner of the property the statue sits on, claiming it might be outside of the county’s jurisdiction.

Letters were sent back and forth between the City and the County, but eventually no clear evidence could say who owns the property and the Board of Aldermen decided to not pursue the matter further, citing the risk of damaging relationships between the two entities and the community further than had been already.

July also brought the return of sports, in a way.

Football looked as if it may not happen in 2020 due to the ongoing COVID-19 pandemic, but the NCAA and Southeastern Conference forged ahead, deciding to allow workouts to take place in the late summer months.

The Ole Miss football program returned to campus in early July to begin what little summer workouts were being allowed by the NCAA. COVID-19 testing, and a makeshift bubble were part of the team’s early practices.

The return of football did not come without challenges, as the team received several positive cases throughout the summer, resulting in quarantining and contact tracing.

By the end of summer, the Rebels and first-year head coach Lane Kiffin received their makeshift 2020 schedule with a 10-game, conference-only schedule that began on Sept. 26.

After months of planning and preparation, schools reopened their doors for the 2020-21 academic year.

The Oxford and Lafayette County School Districts formulated plans throughout the summer to prepare for the arrival of students back in classrooms for the first time since prior to Spring Break in March.

Both OSD and LCSD took different approaches, with Oxford opting to delay the start of school by two weeks due to the late-summer surge in COVID-19 cases throughout Lafayette County. Once students returned to Oxford schools, a normal school schedule commenced with traditional in-person instruction and virtual learning taking place.

Lafayette schools implemented a different strategy with a hybrid schedule. Students were put into two groups, Red Team and Gold Team, and created a schedule where one team would come for two days then the other team would come two days with Wednesday serving as a virtual day for all students.

Resuming traditional learning in the midst of a pandemic did not come without issues. Lafayette had to quarantine its entire third grade for two weeks in the early portion of the fall semester due to positive cases amongst the teachers. Toward the end of the semester, Oxford closed its middle school for a week, before having the entire school district go virtual the week leading up to Thanksgiving and COVID-19 cases began to surge.

Oxford native, and longtime leader at the University of Mississippi, Larry Sparks made the announced in August that he would be retiring at the end of 2020.

Sparks’ announcement capped a 23-year tenure at Ole Miss, which included many roles. Since 2006, Sparks served as the University’s chief financial officer.

In 2019, Sparks became the school’s interim chancellor. He stepped in for outgoing chancellor Jeffrey Vitter, who announced he would be stepping down from the post at the end of 2018. Sparks took over in January of last year and held the title until October when Glenn Boyce was announced as Vitter’s permanent successor.