Ole Miss gives complete effort in win over No. 10 Missouri 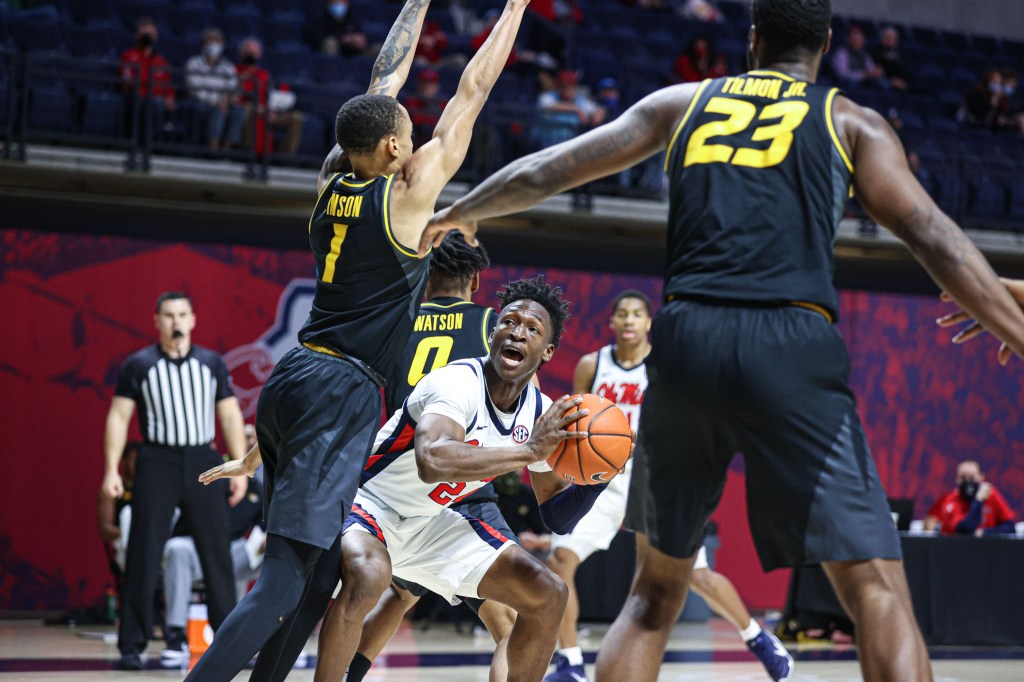 Ole Miss guard Jarkel Joiner (24) look to attempt a shot against Missouri’s Xavier Pinson (1) during their game at The Pavilion on Wednesday, February 10, 2021. The Rebels defeated No. 10 Missouri 80-59. (Ole Miss Athletics)

There is something about a No. 10 team that the Ole Miss men’s basketball finds appealing to them.

For the second time in the last eight days the Rebels took down a Top-10 team, defeating No. 10 Missouri 80-59 at The Pavilion on Wednesday. The victory marked the third straight win for Ole Miss who are undefeated in the month of February since losing at Georgia on Jan. 30.

After being on the outside looking in, the last three wins have put the Rebels back in the NCAA Tournament bubble conversation. They now have four Quad-1 wins after the win over the Tigers (13-4, 6-4 Southeastern Conference).

“We’re playing well at the right time,” said Ole Miss head coach Kermit Davis. “There’s a lot of basketball ahead, but it’s starting to look like a team that we envisioned.”

In what was most balanced performance in conference play, the Rebels (11-8, 6-6) had their second-most point scored in an SEC game this year. The 21-point margin of victory was the largest over Top-1o opponent since the Rebels’ 84-56 win over then No. 6 Alabama during the 2002 season.

Jarkel Joiner had a game-high 21 points while Devontae Shuler, the reigning SEC Co-Player of the Week, and Luis Rodriguez scored 15 points each.

The defense that has come to be expected from Ole Miss was once again on display. Missouri was held to 49-percent shooting from the floor and committed 12 turnovers. The Rebels did not allow many second-chance opportunities, pulling down 25 defensive rebounds.

Romello White found himself in foul trouble early in the first half, causing Sammy Hunter to have valuable minutes. The sophomore forward scored four points and had three rebounds in 15 minutes of work off the bench.

“Sammy has really started to be better. He’s really maturing,” Davis said. “The thing we’ve got to remember with Sammy is with the COVID year, he’s really a freshman. He’s a guy that can pick and pop. Sammy’s a guy who can play with great length. …It’s huge coming down the stretch for a guy like Sammy to start getting some confidence.”

Ole Miss will take their winning-streak on the road to the other Columbia this Saturday, taking on South Carolina at 5 p.m. CT.