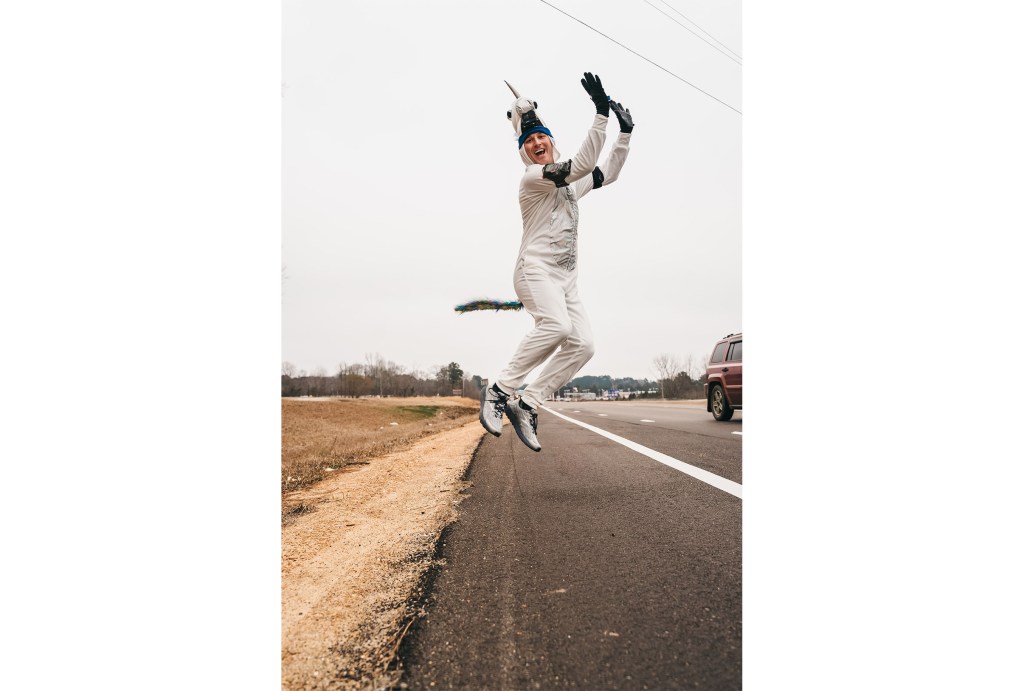 Mikah Meyer was spotted in Oxford running in a unicorn onesie while promoting Outdoor Safe Spaces for the LGBTQ+ Community. (Photo by Madeline Elli)

The first was the rare snowfall that covered the town and country. The second was a unicorn running down Jackson Avenue.

The latter was Mikah Meyer, a travel writer and LGBTQ+ spokesperson. Meyer is spending the month of February running across North Mississippi as part of a documentary to spread awareness for Outdoor Safe Spaces for the LGBTQ+ community.

“When I run through cities, I try to do something fun because I will be going across so many people,” Meyer said. “So, on the (first) day I ran through Oxford, I was wearing a rainbow-wig and a rainbow-tutu, and I got a lot of fun honks from people. On the day I ran out of Oxford, I wore a unicorn onesie, which was really fun.”

Meyer became a noted figure in 2019 for visiting more than 400 units of the U.S. National Park System. Last year, he ran across Minnesota to spread awareness for the Outdoor Safe Spaces.

According to Meyer, people that identify as LGBTQ+ can feel unsafe in outdoor and rural areas. Meyer is sharing a symbol that Allies can wear to show support for queer communities on camping trips and in rural areas.

Now, he is in Mississippi for the same cause. According to Meyer’s social media followers, Mississippi is the most anti-gay state in America. To find out if this was true, he is filming his journey across the Magnolia State as part of a documentary.

He decided to stop in Oxford and ended up staying longer than anticipated due to the snowstorm. During this short delay, he was able to take some photos around town and speak to the local Rotary Club.

This was technically Meyer’s second time at Oxford. As a University of Memphis student, Meyer came to Oxford in 2009 to interview for a MidSouth Rotary Club Scholarship. He received the scholarship, which helped fund his grad school tuition and allowed him to travel across North America.

Meyer spoke to the Rotary Club two times. On Feb. 9, he spoke with local business leaders, and on Feb. 10, with faculty and staff at the University of Mississippi.

“One of the interesting things about Oxford was that everyone told me it was the most accepting place in Mississippi,” Meyer said. “So, basically, if you are anywhere that you don’t think of as acceptable, if you can do something like wear my Outside Safe Space pin to show people you are an ally, then we can start to change those (negative) stereotypes.”

Despite the weather, he plans to continue on his journey to spread awareness for this cause. Those interested in helping Meyer can purchase Outdoor Safe Space items on his website, mikahmeyer.com, and follow him on social media. His trip will end on Feb. 28 at Tunica at a public socially-distanced event.