Oxford basketball swept out of 6A playoffs by Tupelo 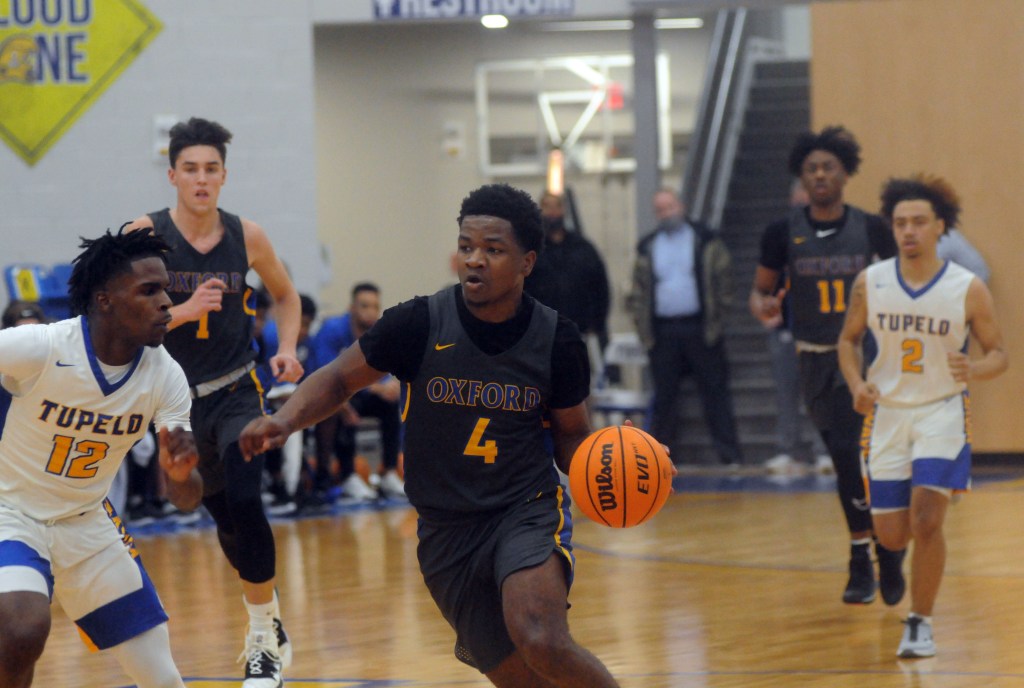 Oxford’s Omari Frierson (4) dribbles upcourt against Tupelo during the second round game of the MHSAA Class 6A state playoffs at Tupelo High School on Thursday, February 25, 2021. The Chargers lost 78-69. (Jake Thompson/Oxford Eagle)

TUPELO — Oxford’s boys basketball team had opportunities to get to the elite eight of the MHSAA 6A state playoffs, but Tupelo was too much for them in the final minutes.

The Golden Wave ended Oxford’s season on Thursday, defeating the Chargers 78-69 in the second round at Tupelo High School.

Within two points with 4:35 remaining, Oxford was unable to get any closer as Tupelo went on a 17-10 run to close out the game. The Chargers’ inability to eliminate second-chance shots by Tupelo plagued them all game.

Tupelo out-rebounded Oxford 38-31 with 16 of those being offensive rebounds.

“That’s been one of our faults all year long,” Oxford head coach Drew Tyler said. “We definitely handled it in our first round game against South Panola and then all of a sudden tonight, I’ll say it again, we don’t value the importance of a defensive rebound. We don’t want to block out, we want to block back and keep them away from the goal.”

The Chargers kept the game close, never letting Tupelo get any more than a 10-point lead all game. The offense was slow to start the game but Oxford gradually started stringing scoring possessions together.

Unfortunately for Oxford, Tupelo was not missing many shots, either.

“I thought we made huge plays throughout the whole game on the offensive end. Home run plays that gave us a chance to win numerous times,” Tyler said. “On the defensive end, just out of position. We got caught behind Tupelo guys and I thought they stayed on offense a lot during the second half and at the free throw line. We were out of position and we were fouling.”

Prior to Winter Storms Uri and Viola, the Oxford girls basketball team may have been one of the hottest teams entering the 6A playoffs.

Coming off their first region tournament championship in five years, the Lady Chargers earned themselves a bye into the second round, unfortunately they also ran into a very good Tupelo squad.

The Lady Wave defeated Oxford 69-55 at Oxford High School on Wednesday, putting an end to what was a very successful season for head coach Cliff Ormon’s team.

Oxford took a 30-29 lead early in the third quarter, but from there Tupelo took over the second half with a 40-25 run.

“We talked about handling runs. I thought in the first half I thought we kind of managed a big one and it showed the type of kids we have and their fight,” Ormon said. “Not making excuses, there’s a lot of teams that are in the same boat, but that 12-day layoff and not having your legs and just make run after run. We just couldn’t get over that hump.”

Sophomore Audria Houston had a game-high 21 points for Oxford while Keyunna Tellis scored 10 points as the only other Lady Charger in double figures.