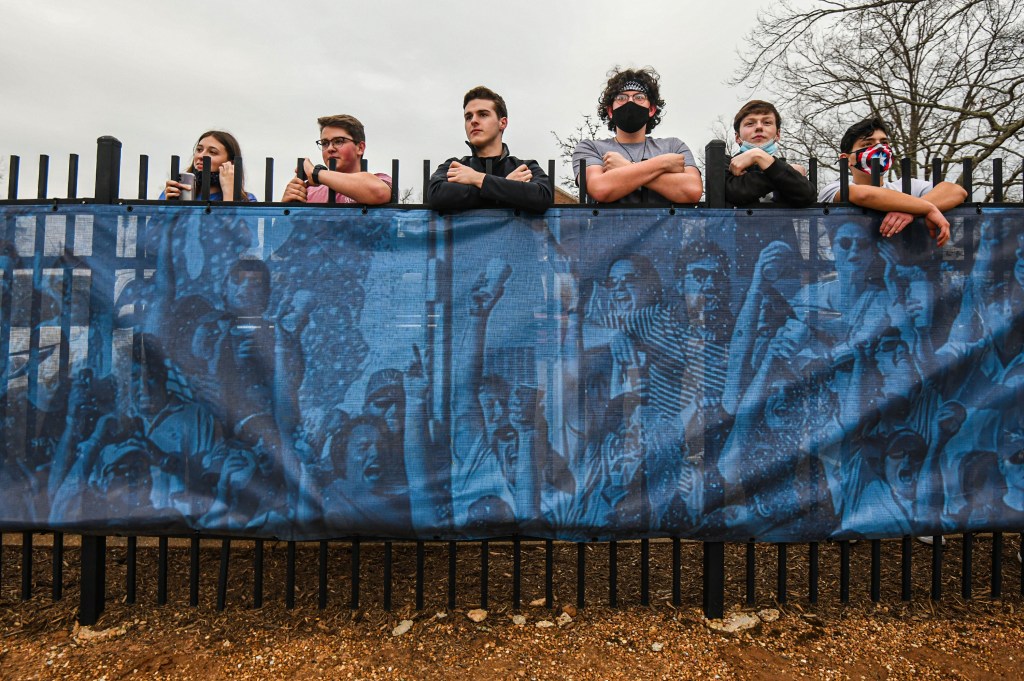 Fans peer over the stadium fence to watch the Ole Miss vs. Arkansas State at Oxford-University Stadium in Oxford, Miss. on Wednesday, February 24, 2021. Ole Miss announced a phase approach at increasing capacity at O-U Stadium throughout the season. (©Bruce Newman)

After announcing on Tuesday they were working on new attendance plans in the wake of Governor Tate Reeves’ latest Executive Order, Ole Miss revealed those plans on Wednesday.

No. 4 Ole Miss baseball’s game against Jackson State on Wednesday will use the current attendance plan, but the Rebels will begin expanding attendance this weekend for the Belmont three-game series.

Despite the Oxford Board of Aldermen voting to follow Reeves’ Executive Orders and eliminating its nearly year-long mask mandate, masks or facial coverings are still required when entering the facility and when walking around the concourse. Masks may only be removed when seated.

“We are beginning a phased approach of expanding our outdoor attendance to full capacity over the coming weeks,” Carter said. “In consultation with the SEC and other agencies, our department is working hard to take those steps safely and appropriately. We believe incremental attendance growth will give us the best opportunity to monitor the health landscape, review our processes and address any safety issues as needed.”

The left field area will return to previous operations, with fans bringing their own chairs and the BBQ areas reopened. The right field student section will double its ticket numbers, and the allotment will continue to grow over the course of the season. Student tickets will go on sale at 8 a.m. on Monday of each game week. Portable chairs will be provided for right field and no tents or personal chairs are allowed.

“With all that our country has been through in the past year, I hope you are as excited as we are to be all together again cheering the Rebels,” Carter added.

For the Ole Miss men’s basketball regular season finale against Vanderbilt at 6 p.m. on Saturday, all season ticket holders who were able to select at 25 percent will receive tickets for game. Additional student tickets are available and may be purchased at students.olemisstix.com.

Attendance information for this April’s Grove Bowl will be announced at a later date.

For volleyball and tennis matches, seating will be on a first come, first served basis. For all softball games and soccer matches, player guest lists have been received from both Ole Miss and visiting teams and priority admission will be offered to a select group of supporters for both programs. Remaining spots, which are expected to increase throughout the season, will then be offered on a first come first serve basis.

The Ole Miss softball team has their home opener this weekend as well, hosting Samford, North Dakota State and Indiana State in the Ole Miss Classic.