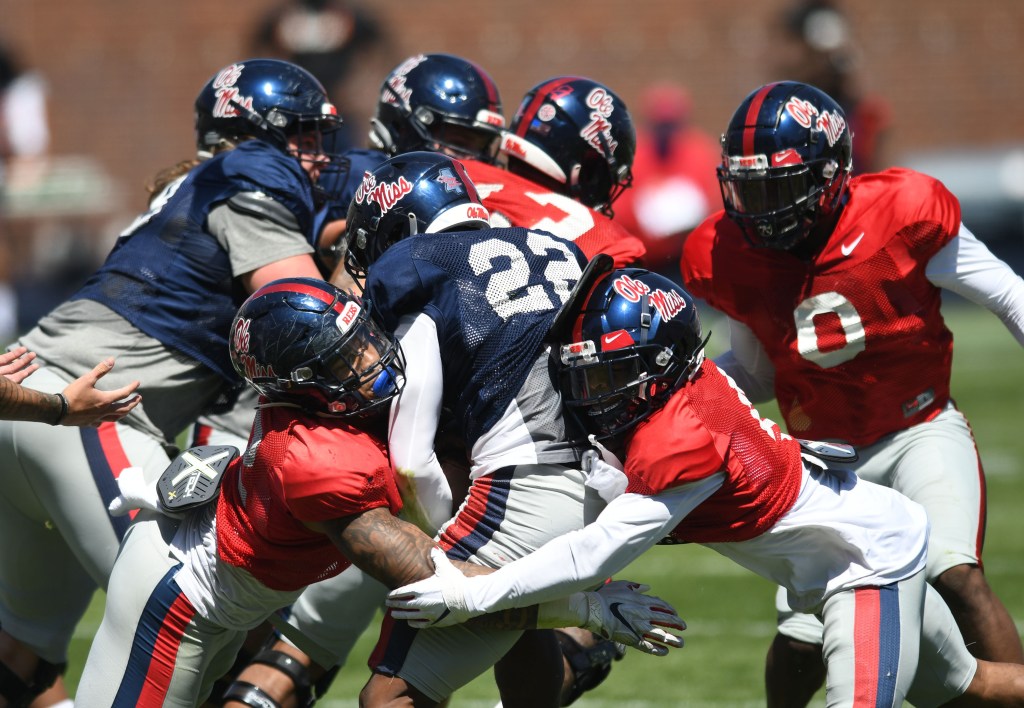 Ole Miss running back Kentrel Bullock is tackled by a pair of Rebel defenders during a scrimmage at Vaught-Hemingway Stadium on Saturday, April 3, 2021. (Bruce Newman)

For the first time since November, the Ole Miss football team was inside Vaught-Hemingway Stadium with fans in attendance for an open scrimmage last weekend.

Saturday’s practice-turned-scrimmage was the first open practice for media and fans during the Rebels’ spring practices. Each Saturday will be an open practice inside VHS, including the return of the Grove Bowl on April 24.

After normal group drills and stretching, Ole Miss conducted a semi-controlled scrimmage. It was an 11-on-11 format, similar to a normal game but quarterbacks were not touched and special teams were simulated after each possession.

The opening drive resulted in a field goal, the only points produced in the scrimmage.

Quarterbacks Matt Corral and Kinkead Dent felt pressure by the Ole Miss defensive front, led by senior edge rusher Sam Williams, who picked up a sack. Corral had a pass intercepted during a two-minute drill towards the end of the scrimmage and secondary forced a fumble against the second-team offense.

“I’m pleased with our defense when we make explosive plays,” said Ole Miss head coach Lane Kiffin on Monday. “I’m very pleased with a lot of guys on defense, returners and new guys. I feel like, for whatever it’s worth, in practice we feel like a different defense than we were a year ago.”

The defenses success could be attributed to a year under a new system and Kiffin getting his players installed into the schemes, but another reason could be number of starters missing on offense to start the spring.

Running back Jerrion Ealy is sitting out due to having surgery on his shoulder in February, causing him to also miss the baseball season. Wide receiver Jonathan Mingo did not participate in Saturday’s scrimmage and has been out with an injury as was Braylon Sanders and tight ends Casey Kelly and Hudson Wolfe.

Like Ealy, Kelly is sitting out the entire spring due to an injury. Running back Henry Parrish and center Ben Brown also sat out of Saturday’s scrimmage.

Without their star players, Corral was one of four returning starters on offense who participated in Saturday’s scrimmage along with wide receiver Dontario Drummond, tackle Nick Broeker and guard Caleb Warren. Snoop Connor also participated on Saturday.

“On offense we have a lot of players out, really all around, especially skill,” Kiffin said. “That’s not helping quarterback play, obviously.”

Early enrollee and former Starkville quarterback Luke Altmyer took some reps during the 7-on-7 portion of practice and threw one touchdown to walk-on Nevin Wells.