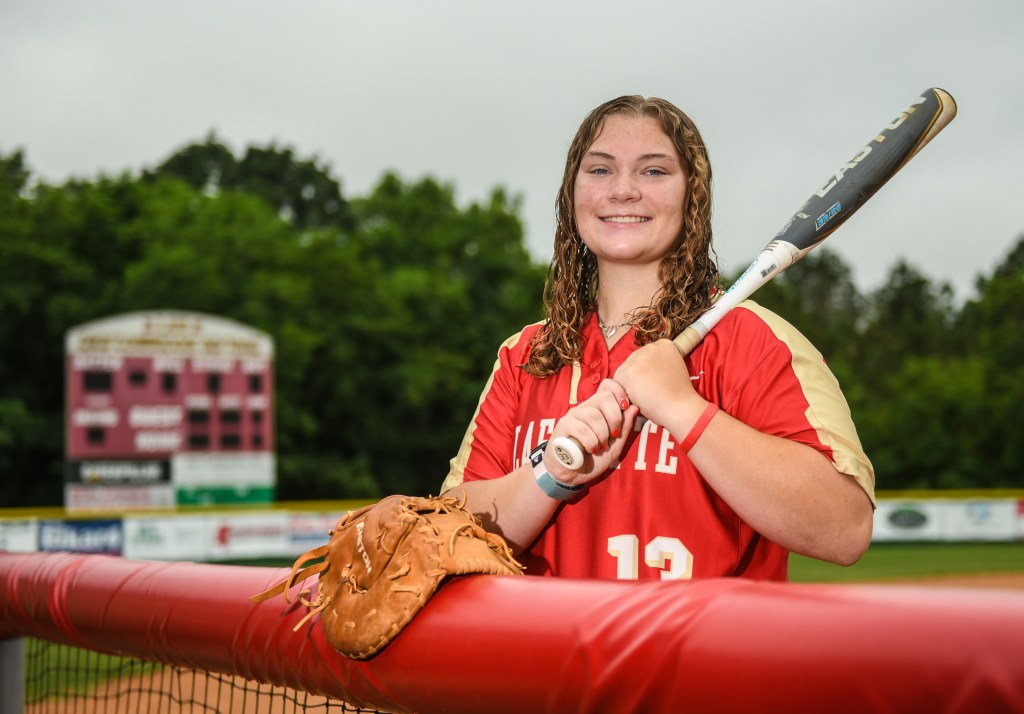 After losing out on the 2020 season, area softball teams did not take the 2021 season for granted.

That included Lafayette’s Landy Davis, who worked hard in the offseason and became one of the Commodores key players at the plate and at first base. Davis’ performance this season helped lead the Commodores to the second round of the Class 5A softball playoffs and earned her this year’s EAGLE Player of the Year award.

Davis, a senior, has played first base for the Commodores since seventh grade.

“Since seventh grade, this is what I’ve wanted to do,” Davis said. “To be out there, it’s amazing. I love first base. That is my home and I’m going to miss it.”

Davis was a consistent piece of Lafayette’s offense. She led the team in batting average with .484 and in runs batted in with 38. She finished her senior year with six home runs and also led the team in doubles with 11.

At first base, Davis made sure any ball thrown her way was caught. No matter if it was thrown high or low.

“She was such a big hitter for us all year, but how many balls she scooped out of the dirt for us all year, and saved us all year, is even more impressive,” said Lafayette head coach Greg Lewis. “She’s always worked hard. She would come in here and work on her swings early. All the girls did that, but everything just kept clicking for her. She has a lot of power, and always had. She seemed locked in and had a great (season).”

Every day, Davis would spend time in the hitting cage before and after practice with her teammates.

“Every day adds up,” Davis said.

With her junior year lost, along with everyone else’s season last spring due to the COVID-19 pandemic, Davis found motivation after playing only nine games.

Returning in February for her final season as a Commodore, Davis made sure to enjoy every inning and every game, knowing it could all come an end at a moment’s notice once again.

“We were really determined to play this season, especially after last season,” Davis said. “You kind of learn to not take it for granted. There was a time I would get really nervous at the plate. I’m just really thankful to be out here, so just have fun while you’re out there. I really just had fun.”

Behind the plate, Rhea was the Commodores backstop as catcher. But standing at the plate, the senior provided just as much of a threat on offense as she did on defense. Rhea finished behind Landry with a .383 batting average and was third on the team with 22 RBIs.

“It’s going to be hard to replace (Rhea) behind the plate. That (position) kind of leads everything and keeps the pitchers going in the right direction,” Lewis said. “Same thing (as Davis);you talk about the number of balls she blocks and keeps people from running. If you can’t keep that person from stealing second every time they walk out there, it’s going to be a long day. She was able to keep that running game down and under control.”

Serving as Rhea’s battery mate, Cobbs was the Commodores ace in the circle. Cobbs pitched 86 innings this season and finished with an earned run average of 2.85 along with 95 strikeouts while walking only 35 batters.

At the plate, Cobbs would help herself out constantly with .378 batting average and 24 RBIs and five home runs.

“She is just steady and has that calming sense that you’ve got that person that you know is going to go out there and get after it,” Lewis said of Cobbs. “We set our schedule tough all year this year, knowing that we could run them out there and (Cobbs) was up to the challenge. I know she didn’t have probably the season that she wanted, but at the same time she was ready to take the ball each time.”

Jones finished the season with a .301 batting average to go with 17 runs batted in, 12 runs scored and five doubles.

Jones was tasked with being the Chargers ace in the circle in her freshman season and delivered. She pitched 90.1 innings and recorded 76 strikeouts, 57 walks and finished with a 6.27 ERA. At the plate, Jones had a batting average of .391 and reach on base nearly 46 percent of the time.

“MJ was our leader,” said Tabitha Beard, former Oxford head coach and current Co-Activities Director. “She was the pitcher and she was also our leadoff batter. So, a lot of the games, looking back at last season and stats, we kind of rallied around that. When MJ got on, great things happened and we produced. In the circle, she pitched all of our games pretty much. For the most part she did it battling injury. (It was) just a lot of fight in a lot of hard times. When they needed her, she stepped up.”

The Chargers offense had success all season with three players recording more than 21 RBIs and two more with at least 12. Leading that offense was Gillis with a team high .424 batting average and 35 RBIs. Bathrop followed behind her with a .414 average to go with 12 RBIs

“We hit the ball really, really well and a lot of times we took ourselves out of it with a few defensive things,” Beard said. “It’s easier on a pitcher when you have an offense that’s producing runs the way that we did.”