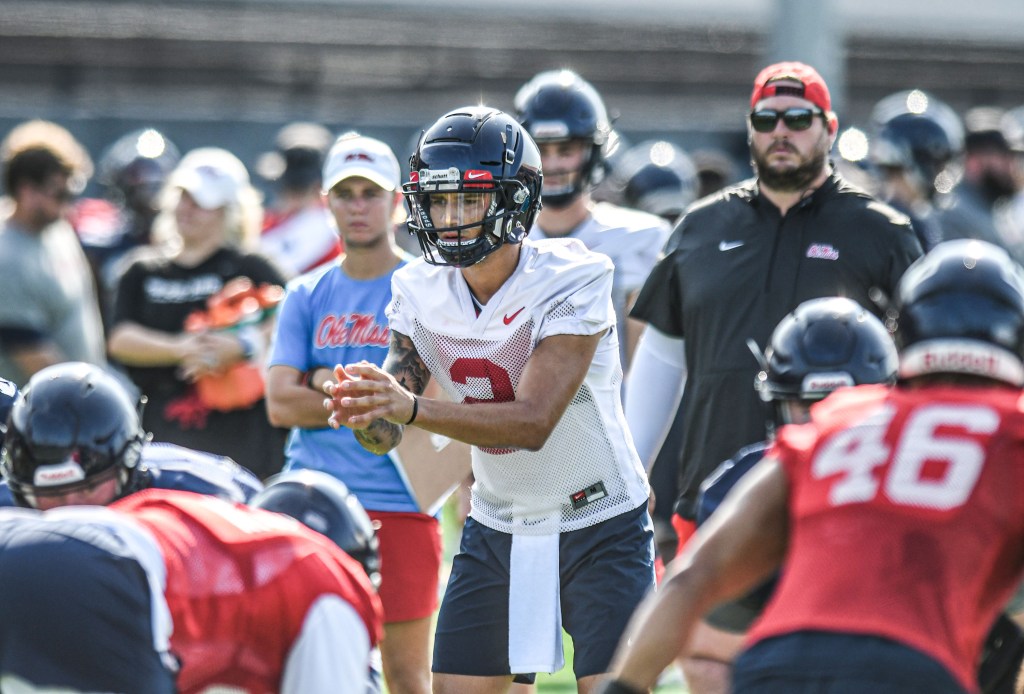 Ole Miss offensive coordinator Jeff Lebby is high on the Rebels entering his second season, but also knows questions remain as they wind down the first week of fall camp.

Lebby spoke with the media following Wednesday’s practice and gave updates on some of the key players in the offense as the season opener is less than a month away in Atlanta.

Plenty has been said and written about Matt Corral, but the Rebel quarterback is the Southeastern Conference’s top returning signal caller and has warranted all the praise he’s received in the preseason. One key difference from Corral this time last year to now is the maturity and growth, that he  has self-admitted, that was not there ahead of the 2020 season.

Corral’s coordinator is also noticing the difference in leadership from his quarterback.

“I think there are a couple of different things that you immediately notice,” Lebby said of Corral. One is leadership. He’s done an unbelievable job being a great leader and setting the standard on how we’re going to operate and how we’re going to go about things in our building, so that’s first and foremost. In the meeting room he has taken giant strides, huge steps in nailing the position. We talk about knowing your job, and he knows it and he’s eager to learn every single day. He’s been incredibly coachable. After all of the production he has had, he’s wanting to get better.”

While Corral’s position as starting quarterback is safe and nearly untouchable, questions loom behind him on the depth chart.

John Rhys Plumlee is now a full-time receiver and adjusting to his new role, leaving the backup quarterback slot prime for the taking. Freshman Luke Altmyer and sophomore Kinkead Dent are battling to claim that second spot behind Corral, but each day in camp presents new challenges in terms of evaluating both.

“​​Those guys have done a good job through the first few days of fall camp,” Lebby said. “Kinkead has really got most of the work there. Luke got a little bit (on Wednesday). The competition will be ongoing to kind of see how things go through fall camp and make a decision.”

Running back Jerrion Ealy is another key piece to the Ole Miss offense and is seeing his role expand for this season. Along with Plumlee, Ealy is being used in the slot along with his traditional running back roles.